Wervik: The season really started now…the first national race has been raced and of all the 59,421 Bourges racers it was cock “Jacques” from Guido Vervaeke out of the West-flemish Wervik. With a speed of 1268,19 m/m he beat the pigeons from Clicque Gino (1261,81m/m) and Platteeuw Kurt & Raf (1260,12m/m). For Guido, who is 70 years young, pigeon sport is a real hobby and he is very happy that his “Jacques” brought him this honour. With only 2 old and 9 yearling cocks the season of 2021 was started off and Guido proved once more that you’re not lost against the big lofts upfront. Quality and top health is and stays the determining factor to win..

At the Vervaeke house everything is very clean. The house, the garden, the pigeons lofts…everything is taken care of with the necessary love. Also on the pigeon loft their isn’t anything to remark. Guido: “I started racing pigeons 13 years ago and despite my small pigeon loft I can already show a 1st provincial and 4 zonal victories. This national victory is the biggest victory off course. I never expected this, pigeon sport can be really beautiful and grateful.
Let me be very clear that pigeon sport is a pure hobby over here and I limit my game to the widow cocks. The widow cocks don’t breed early and only come together just before the start of the season. In a matter of care you won’t find a lot of secrets. Twice a day the widow cocks have to train during a full hour and the way they train is something that tells a pigeon fancier enough. The widow cocks are being fed individually and the same as at many other pl            aces this is light at the beginning of the week and feed heavier towards the day of basketing. He doesn’t give anything against ‘head diseases’ and 14 days ago they got a pill “Trichocure” (Oropharma) against trichomoniases .  And when I think of it I do some vitamins in the water and that’s it. “

The hero of the day. “Jacques” (B20-3100337) was born on the lofts of Jacques Callewaert-Van Oost from Torhout and came via a voucher to Guido. “Jacques” is a cock of the bigger type but this is being carried by a strong body and strong wings. Via short distance races Arras, Clermont and middle distance races Fontenay and Chateaudun it went direction Bourges National. As always the cocks get to see their nest dish at the day of baseketing and can cuddle with their hen during a few minutes. At arrival the ladies are waiting for their partners. Afterwards they stay together for a few hours and when it was a very heavy race they can stay together until the next day in the morning

The arrival of “Jacques” did created a bit of confusion as Guido thought it was a late one from Chateaudun but when he saw his chequered white pin cock he knew immediately that is was a Bourges racer and his heart stopped all of a sudden for a minute.

Guido, a big congratulation from the entire Herbots team and we know that you will enjoy fully of your first national victory as when we visited you the first champagne corks were already popping. We can’t blame you ! 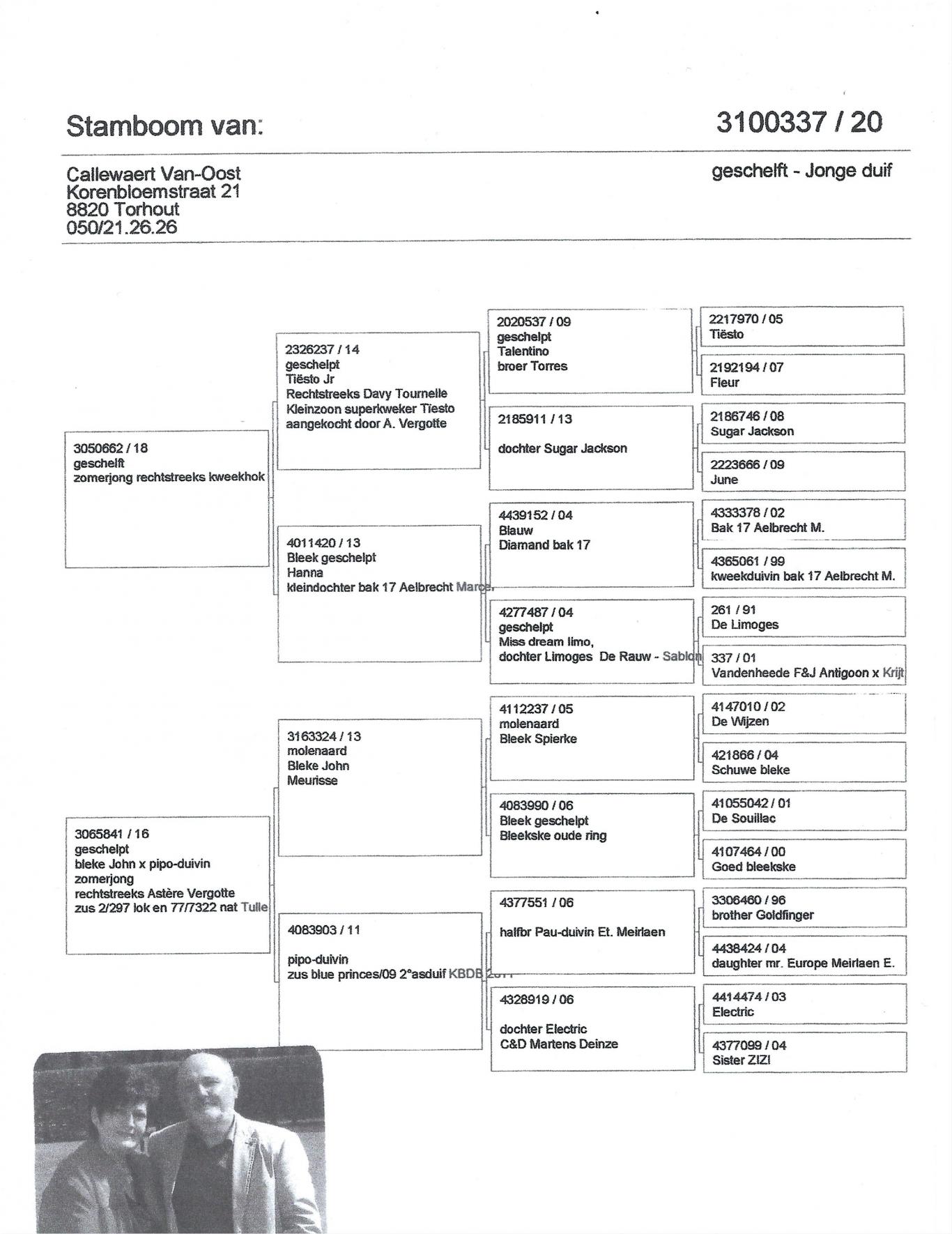 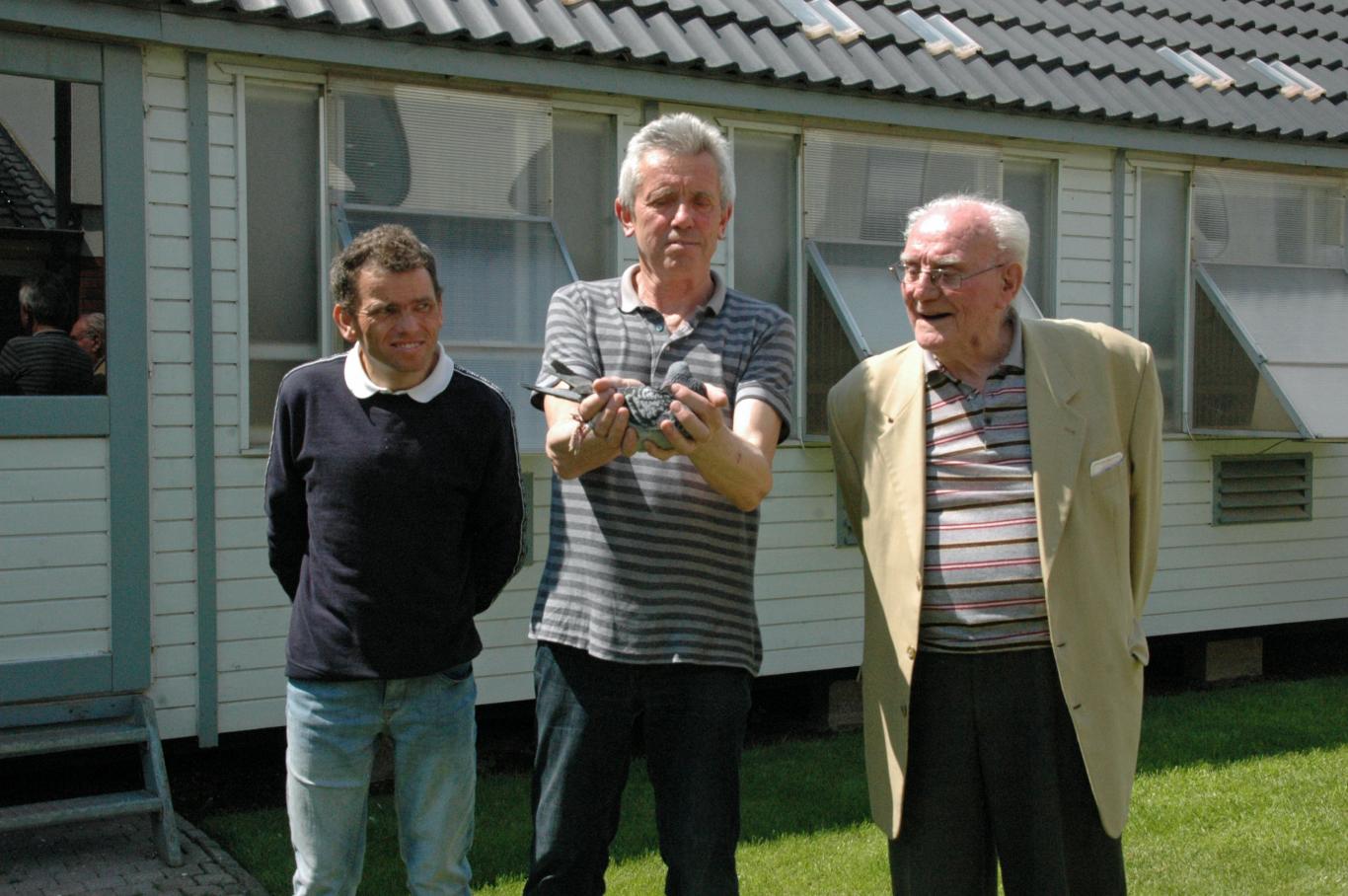