Which title or race didn’t he win yet? A few weeks ago during the start of the middle distance races Stephan told himself, keep an eye on my youngsters because they aren’t done with it yet. He also suffered many losses but with those who are still there I hope to race well. When you have a look at these words 5 weeks later you can only confirm he was right. Stephan Machiels and Sabrina Brugmans from Halen over classed Argenton and taking into account his location which wasn’t in his advantage they race grandiose.

Let’s get back a few weeks ago, the 1st topper between the youngsters arose. BE 21-5030038 “Wout” is a very nice cock who winst the 1st Provincial Sens against 2,969 youngsters and shined again the week after with the 5th Provincial Orléans against 1,818 pigeons. Twice in very hard weather circumstances he raced top, and now on Argenton ‘Wout’ was present again and ended up at the 71st National spot, just as his little sister who won the 30th National.

On Bourges National we had the first big appointment with the youngsters, but again he didn’t disappoint wan with 30 – 43 – 72 and 81st National against 18,710 youngsters you can talk again of a real top result.

Now we go direction apotheose with Argenton National. Or how fair or how weird pigeon sport can sound. The first pigeons are being clocked especially the West side of Brussels. At that moment no stress until the phone rings. A French fancier got one of their pigeon out of Argenton on his loft. Many questions pop up in your mind, how is this possible? What happened to that pigeon? Are the youngster going to come? Just when that conversation is going on noticed one of the watchers a pigeon very high up in the sky and is coming down as a little ball direction sputnik. The clock said 14h46 and immediately this one went 40 m/m quicker as the first pigeon that was already clocked. Stress was gone, the first pigeon and one very early. 13 others followed within less than half an hour with 6 youngsters within the 71 first National and the National victory on top of it, so you can speak of a grandiose result.

The winning pigeon got the name “Hanne”, named after the daughter of the watcher that saw the pigeon first coming. Very nice, no….Also ‘Hanne’ didn’t show herself for the first time and won on Bourges already the 261st National against 18,710 pigeons and won also 3x top. A new topper to strengthen the breeding loft.

For them this is after the 1st National La Souterraine this year the 3rd National victory out of their career.

The youngsters are being left amongst each other at the beginning and were darkened from the 14th of March until the 10th of June. Mostly the curtains closed at 18h00 in the evening and at 8 o’clock in the morning they are being opened again. From beginning of July this is from 6 in the morning until 6 and in the evening it stays light until 22h. They keep onto this rhythm until the end of the season.

They are being raced on the sliding doors system but were only separated after 4 races (beginning of July) and the 1st two races after they have been separated they are being taken out just like that to be basketed. It is only now that the real motivation started and carton boxes come onto the lofts.

In a matter of training it is always at a high speed. At the beginning of the year they can train once a day but once the races are up he switches onto 2 trainings a day. Also at the day of basketing they will train and can come together the entire morning until 13h. Afterwards they get good food and are ready for the race. At arrival they can stay together until Sunday in the late morning.

Also young hens are being coupled to older partners as they were successful doing this the past years. This was done like this and the youngsters can go to the old cocks after the old hens were with them. But this weekend was the last race for the old hens and that’s’ why the youngsters could stay with them first to keep the motivation a good level.

The youngsters get at the beginning of the week Matador youngsters Hot mixture and afterwards they get Racing mix 2 & 3  from Aïda. They feed them twice a day and as they train this much it isn’t a problem to keep them eating. They also get as extra peanuts, seeds candy, P40, Grit and Tovo.

The regular products I give are mostly Entrobac, Atemfrei, Moorgold, Carni Speed and Rotosal from Röhnfried together with Immunol and Conditional powder from Schroeder – Tollisan. On the day of basketing I always keep it to Nano Tollyamin from Schroeder Tollisan.

In a medical way it is Vincent Schroeder from Kerkrade for everything and get in Spring a cure against trichomoniases and I keep on supporting this with B.D. from Belgica De Weerd ( but not every week ). In a matter of the airways the loft is always very dry and don’t have a draft so I have to treat them seldomly. I keep this under control with especially Atemfrei from Röhnfried and Satva from Belgavet.

Stephan & Sabrina, a big congratulation on this nice victory from the entire HERBOTS TEAM. 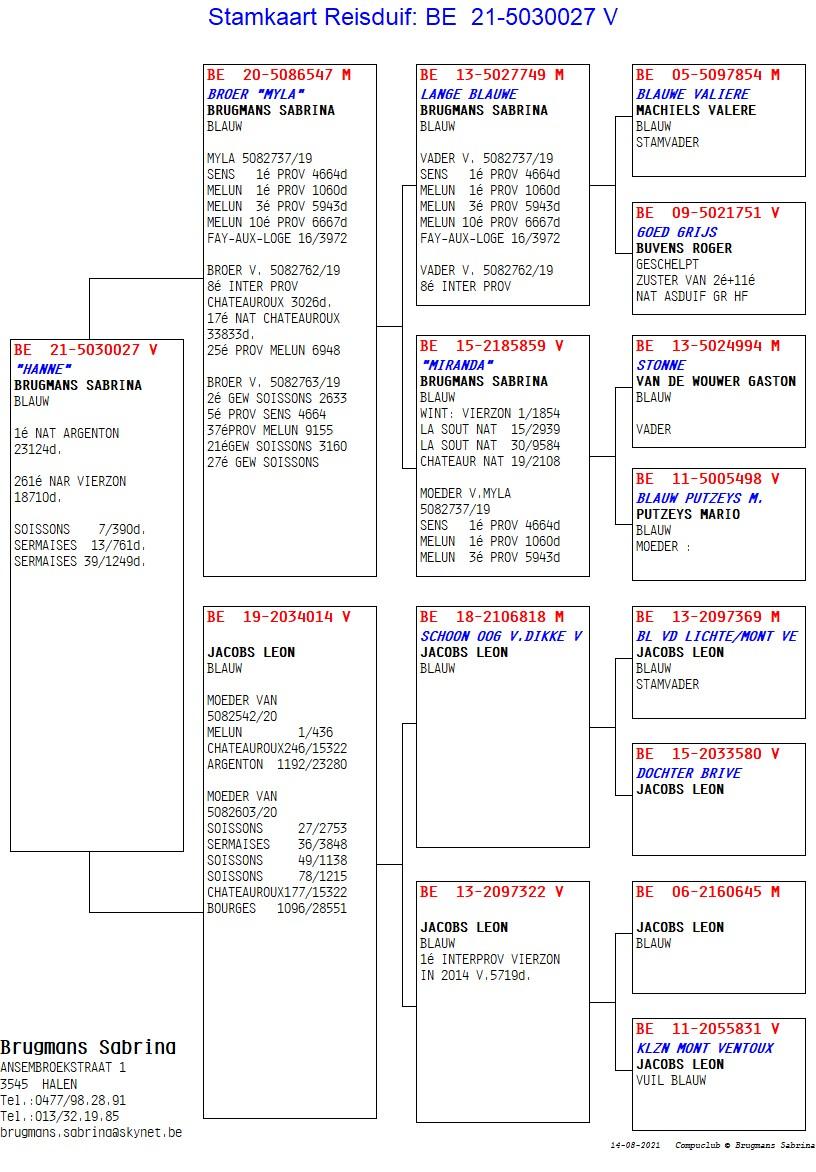