What a kick it must give when you know that a bird has been clocked for a long time in the south of Belgium as number 1 national and then you see one of your pigeons coming straight from the right direction into your loft. Marc Vlaeminck from Ramsel in Antwerp is the lucky one who got to enjoy this scenario. At first a latecomer of Argenton was thought of but when he recognized the black colour of his Valence racer, even Marc got a "goosebumps" moment to never forget. The clock showed 18h39min and 36sec ... good for 1062,65 m/m ... good for the national victory against 7,591 Valence birds. By the way ... Marc used to win the 1st National Gueret and a few years ago he won the 1st National Chateauroux against 14.815 year old pigeons (also the fastest of 25.205 pigeons)... so our sympathetic gardener knows perfectly what it feels like to have a big victory.

For Marc the pigeon sport equals racing pigeons. Administration isn't really his thing. In spite of the national Valence winner "Black Lightning" (B14-6236016) already has a lot of kilometres on his counter, you shouldn't ask Marc about his list of results because he can't conjure it up. "Can you believe that he was raced at the “Tour of Belgium” in the autumn? Also in terms of preparation it doesn't always happen here as it does with others. My "Black Lightning" raised 2 rounds of babbies  before the start of the season. Be honest now... this is not going to be one of many fans".

For the "Black Lightning", Valence will be the last time he saw a release place. He doesn't has to prove anything now and will either change owners or be assigned a box at the breeding loft.

We were lucky to be able to take the "Black Lightning" in our hands a few hours after he came home from this heavy long distancerace and we were amazed how beautiful "round" he still was. Combine this with his thick plumage and his impressive head and you feel like you have a unique winner in your hands.

To the question if "Black Lightning" was specially motivated Marc was able to answer quickly. "A few days before the basketing he still had the bright idea to palm an extra  box and I think that must have been his motivation to beat this power tour out of his wings. For the rest, cocks and hens come together during basketing for 30 minutes and after returning home, they are usually allowed to stay together until the next day".

Marc started the season with a group of 56 old and yearlings. The card of the total widowhood is drawn and as said before, the racers have bred before the start of the season. During the season the pigeons train twice a day for a full hour. For the rest Marc uses a simple method. Feeding usually takes place in a full tank. When you come home and the day after, the Diet feeds the pigeons and after that a mixture with a lot of small seeds. In terms of by-products, Marc only has a fixed regularity in the provision of garlic and onion. He boils off a full bulb of both and adds 5 litres of water, which Marc then gives for a few days. From a medical point of view, the vet is only consulted for the mandatory vaccinations. For the "head" the pigeons weren't treated but about a month ago they got a 7-day cure against tricho.

As far as basic pigeons are concerned, Marc owes a lot to pigeons which he got a long time ago from Firmin Van Loock (Houtvenne), Jos van de Veken (Retie), Leon Jacobs (Tremelo) and Leo Smets (Morkhoven).

Marc had basketed 2 pigeons for Valence and his first drawing now makes him internationally famous !

Congratulations again because of the whole Herbots Team. 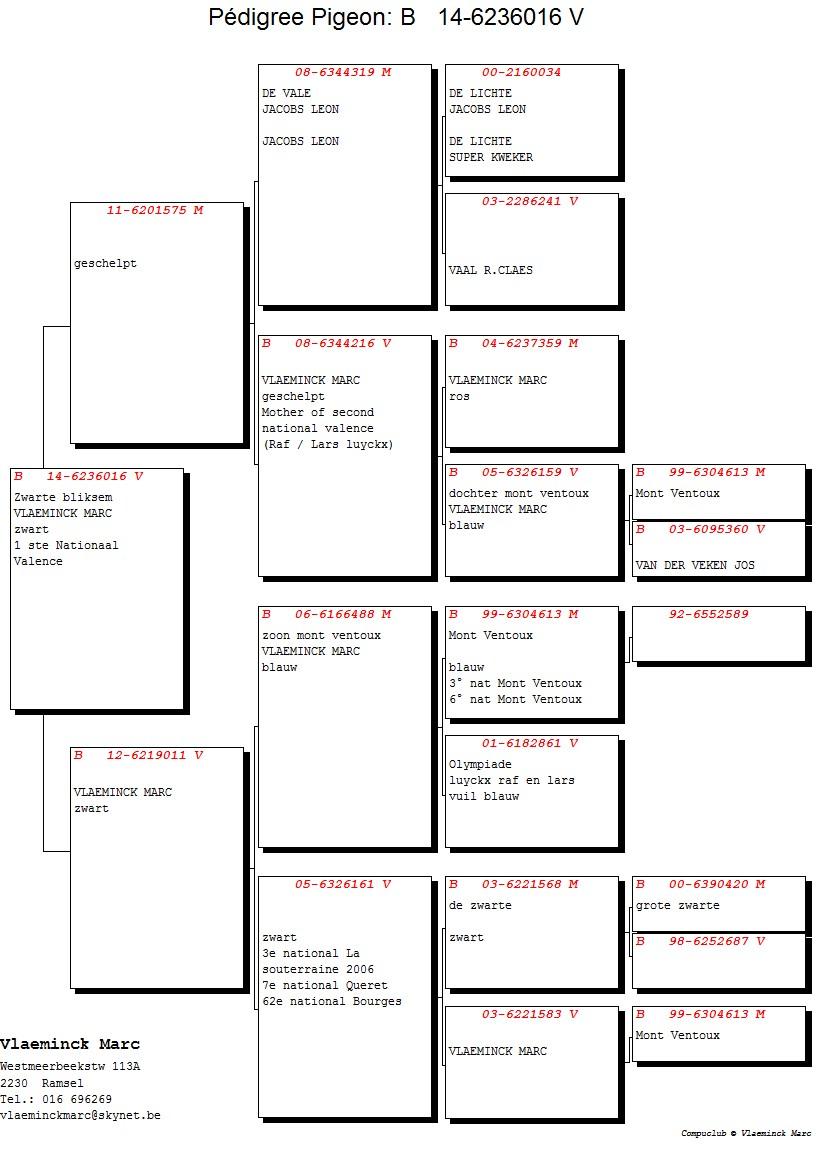