Gavere: In 2014 the Bauters colony shined already for a first time in magic way by winning the 1st National on the really though Poitiers against no less than 12,377 competitors. It was cock ‘Fabian’ when he that showed his class on that race. Two seasons later (2016) the national pigeon journalists had to go to Jo and Mieke Bauters again as their young hen “Ellis” (a granddaughter “Fabian”) won 1st National Ace bird KBDB Greater Middle Distance! Another 2 seasons later (2018) widow cock ‘Totti’ won the 1st National Cahors against 6,356 old pigeons and then now in 2019 they hit the rose again. It is now widow cock ‘Salvatore’ that won the 1st National Limoges against 10,699 year birds (also the fastest against 20,277 pigeons) or in other words; they just can’t be happier at the Bauters’ house.

Jo Bauters lives together with his wife Mieke and their 2 daughters in the Baaigemstraat in Gavere. He has been infected with the pigeon germ since he was very young, and as we know this is a gentle germ, not fatal, slightly addicting and one where you can have a lot of joy with. At a rather young age he learned about everything there is to know about pigeons from his father Andre Bauters who was a short distance racer. Jo wanted to test out the same pigeons on a further distance and this with success.

“BAUTERS PIGEONS”
Jo and his brother started up years ago a company in roofing. Thanks to their huge efforts this company grew and there wasn’t hardly any time left to practice his hobby. A while ago they decided to sell the company and this is how Jo and his brother became building promotors. Since last year Jo got out this project and can fully concentrate now on the pigeons as a fulltime professional pigeon fanciers under the name “Bauters Pigeons”.

Jo built up his own strain where the national winner ‘Fabian’ played a crucial role. ‘Fabian’ raced a.o. 1st Provincial Bourges 2,473b – 3rd Angerville 305b – 4th Provincial Argenton ‘012 – 5,548b – 5th Souppes 151b – 24th National Argenton ‘012 – 22,384b. After his national victory he wasn’t sold and grew out to be a very good base breeder. The strain from ‘Fabian’ was being crossed in succesfullly with pigeons from Rudi De Saer, Team BDS and Team Freddy De Jaeger.

WIDOW COCKS
The loft exists out of 25 couples breeding pigeons, 34 widow cocks, 24 hens that are being raced on widowhood as well and about 100 young pigeons.
The widow cocks were coupled early, could raise a couple of youngsters and were being separated on time. Before the start of the season the hens came back onto the loft but the hens didn’t lay eggs anymore.
They get the quality mixtures from the Versele-Laga gamma (Dark Plus I.C. gamma) to eat and the schedules that is being advised by the producer is being applied. They can eat all they want, but after that some of the pigeons drink they take away the food.
In a matter of supplements the products from the Brockamp gamma are given. Medically the advice is taken from Piet Blancke. They cure before the racing season and the racing team is being ‘purified’ before the start. Every 3 to 4 weeks they go preventively on control and if necessary they will cure.
The loft feels very pleasant and this is according to Jo thanks to the small aviaries that are placed in front of the lofts. The aviaries have windbreakers (90%) and the bottom of the aviaries are closed. During the day they are fully open, during the night the entrance closes. Also are all the lofts foreseen with ATX heating plates which takes care of a perfect humidity.

SALVATORE
The national Limoges winner got the name ‘Salvatore’. ‘Salvatore’ is a very beautiful pigeon, middle sized, perfectly closed vent bones, strong back…in short like we all like them. Before he won already 5th Chevrainvillers 224b – 18th Peronne 475b – 42nd Orleans 2,721b – 46th Orleans 2,445b - …At homecoming from Limoges he took care of the necessary tension as he waited for 4 full minutes on the sputnik before he registered. Luckily he had enough time left to make it as 1st National. 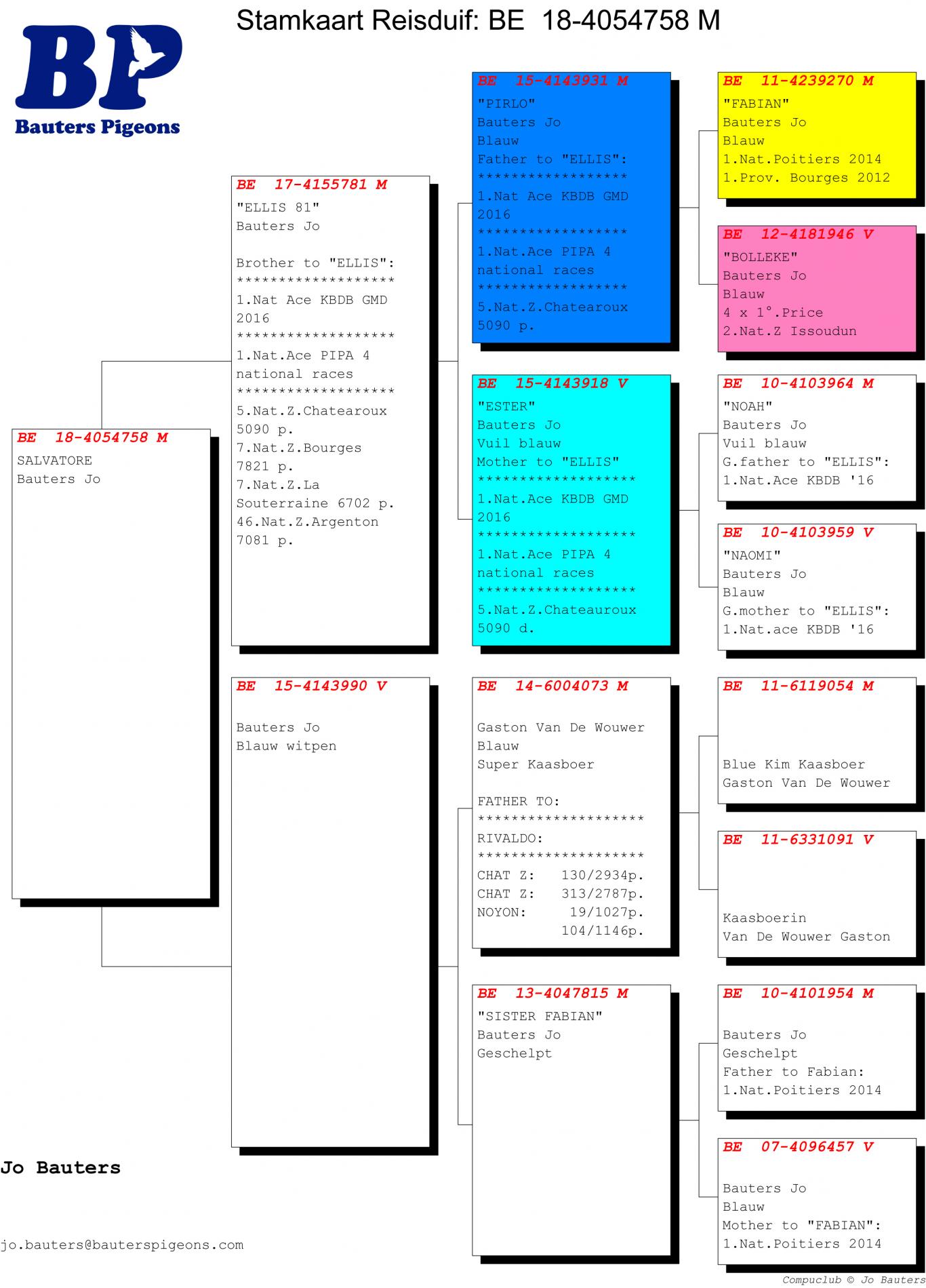