Limoges was due to the bad weather predictions on Saturday and Sunday being released one day earlier, namely on Friday. It seemed to be a good decision as the Limoges pigeons could fly their race in ideal sunny circumstances.
“Blue sky” with some Eastern wind…apparently the ideal weather for the Sioen pigeons. After the won two weeks ago 2 – 3 and 4th National Argenton against 15,235b in the same weather circumstances (1st National in consultation) it was bingo with the 1st National Limoges against 9,389 old pigeons. Again it was “Cameron” (B17-3070024), a super hen that won on Argenton the 2nd National (1st in consultation) that won with a speed of 1,177.67 m/m .
Hilde tells ‘Argenton was a dream result but we were left behind with a nasty feeling. Consequence…the entire hens team, that were on top of their health and condition, stayed on the loft and made a deal it was going to be either Montluçon either Limoges. The weather circumstances pushed us towards Limoges.
The weekend after Argenton they stayed home from a race but were tossed at 60km. It was striking how well the condition of ‘Cameron’ was. We even think that the Argenton race gave her an extra conditional boost as she was even after the race out of Limoges as round as a bullet.
National winner “Cameron”, named after professional cyclist and daughter from late cycler Frank Vandenbroucke, wasn’t an easy on as yearling hen and dared to pair up with other hens. For that reason she was taken of the loft and as she is also a full sister of ‘Wilhelmina’ (1st National Poitiers ’15) she was placed on a separate loft where she took off with a cock. ‘Cameron’ was raced on a nest position and impressed with a 28th National Chateauroux against 13,098 year birds. This convinced her bosses to bring her back in the racing team again as an old hen and race her on widowhood. ‘Cameron’ learnt her lesson and didn’t pair up again with other hens.

Hands that speak pigeon
Luc Sioen read about every page out of the Big Book of Pigeons, no one doubts that. In the past he loved to race the long distance, the heavy work and everything was built to achieve this and every possible success was harvested and then all was brought down to zero again. A lot of money was spent to get the best of the best to Moorslede, the world of top pigeons was the hunting territory of Luc. And this with success. Successes that were also achieved by others with off spring from the long distance top pigeons from Luc.
The advantage of the long distance circle is that he knows a lot about pigeons, knows the pigeon world inside out, has a huge network and you can’t tell him too much stories anymore. And what do you do with all this knowledge and experience, what do you do when you’re hands speak pigeon?

The re-start in faith with a superb base
Luc had a good look around within his circle of acquaintances and new that Jan and Rik Hermans together with Miel Van den Branden, were in the possession of top pigeons for the distances that Luc and Hilde were thinking of namely the greater middle distance. They went to collect a group of young birds in 2011 from these guys. Based on a silent tip from Jan, Luc also visited Willem de Bruyn from Reeuwijk, the always happy dentist, but also very famous pigeon specialist who races weekly very hard in Holland. And also over there Luc and Hilde were being served in the best possible way. As a kind of guarantee for success, they received double the amount of pigeons that they initially ordered. Willem really wanted them to succeed with his pigeons.
The pigeons from both these lofts were being coupled in autumn of 2011 and also here nature could do her thing. The pigeons could pair up freely with the exception of pairing up siblings (they were being coupled onto two lofts). The proof that the pigeons had a lot of potential were the results that were set very quickly by their off spring. They were being served this well in faith and the couples stuck like butter. It seems very simple like this, but being served very well at top fanciers is of the utmost importance. This is something that Luc and Hilde want to emphasize. It isn’t about the quantity, but about the quality…and off course their share of organized luck. Also the breeders were very pleased to hear that this set up was a huge success and due to these successes a few other pigeons from Willem moved to Moorslede. Luc speaks with a lot of appreciation about the way he could choose a top pigeon like ‘Blue Ray’ himself from the loft at Willem and use it as a breeder. This kind of working together makes friendship. Next to the pigeons from these two top lofts they were very successful with pigeons from Gaby Vandenabeele and a few pigeons from their old strain.

A relaxing hobby in a professional way
It has been for a few seasons now that real top results are being set on the lofts in Moorslede. And yet it stays a real hobby for Luc and Hilde. And now I hear a few readers chuckle a bit…and yet it is true. Luc and Hilde focus on one discipline only and race only one important race a weekend. No running around to compete in 5 or 6 races a weekend, no participation to several championships and so on… No, the game with the hens on the greater middle distance is primary and these are their most important races. Their effort and energy is in this case well spent and fits right into their family live. With their choice to focus on the greater middle distance to one day long distance they only have to focus on these disciplines and get top results and classifications. Luc isn’t embarrassed to say that they look at the wind direction to score. As their focus is on the greater middle distance the wind direction at the national races is of utmost importance. When the wind is too much in their disadvantage, the pigeons will be raced on a shorter middle distance race, better then to let them drown in the pack on a national level with head wind. This is how the zonal and provincial results give a better view on the quality of the pigeons. When the wind is in the right direction it isn’t a big surprise that they score top on a national level.
Hilde takes care of the racing hens (about 35 to 40) and a first round of youngsters (about 45) and also a few breeding pigeons. Luc takes care of the widow cocks and the second round of youngsters (about 50) and also a few breeders. Luc isn’t involved in any way in the care of the hens, even more, he even never gets on to this loft !
The lofts that were built for the long distance are still being used for the widow cocks and the breeders, the racing hens reside on a garden loft, a relatively closed box with ‘Boomse’ tiles. The youngsters are also on a loft that is a copy of the lofts at Kees Bosua and Rik Hermans.
The young pigeons are being trained well to maximum 300km. They race enough to get to know the system, but aren’t being raced very hard or being tested thoroughly.

The super hens and their care, close to nature.
When we will look at the overall results and the individual results then we just can’t get around it, this is the house of a colony (rather modest in quantity) of super hens who proof themselves year after year that they are of the highest quality possible.
First off all they argue the cliché that goes around that hens can only set top results for about two seasons. This isn’t the case for this pack and several hens manage to set top results over several different seasons.
The racing hens breed 2 youngsters before the season starts (coupling mid of March, old hens breed one youngster, yearling hens breed 2 youngsters). When the youngsters start to get feathers, one youngster is being removed together with the cock from the loft and the hens stay behind with one youngster. They are being trained on this position and can do their first races like this. Afterwards they come onto widowhood, then their pep has to be found again but once they are used to it again they are top.
The hens stay during the week on shelves in their loft. They train twice a day and in the beginning of the week this is 20 minutes to half an hour and the trainings time increases along the time of basketing approaches and the feeding gets heavier.
Hens that want to mate are being removed from the loft to get the peace back onto the loft. The hens aren’t being spoiled by Hilde either as she doesn’t want them to show their mating skills towards her.
The feeding is being done by Hilde with the system that was taught to her by Sebastien Casaert where she uses the Beyers Elite Enzymix mixtures according the schedule you can find on the website from Beyers (Recup – Built – Energy). At home coming the hens get egg food as accomplishment and once the middle distance races are on the program a few Brockamp products are being added (Oregano, Probac…).
Hilde is a fervent adept of the use of ‘Sliepzand’ (Dofo) as she always got very strong results until now but she still doesn’t know whether she really needs it. But a success formula isn’t something she is willing to change easily. It is also striking that some pigeons remove slime a lot one week and then the other week not with ‘Sliepzand’. She can’t find a straight line in it, but the results are good and are being used weekly. It is a very intensive occupation to give all hens the ‘Sliepzand’ and then remove the slime with a cotton.
It has been 6 seasons that there was an examination by a vet. Against tricho they always give yellow drops and also eye drops are being given. All the rest are, dixit Luc and Hilde: the loft, the observation and the weather the best vet. According the weather circumstances they ‘play’ with the ventilation above the pigeons. When it is chilly the loft is being closed and with hot weather and less wind it is being opened a bit more. This kind of succession leads to the fact that nothing has to be given against head diseases. Also their selection is very hard. Youngsters that are difficult to keep healthy are out. To keep this up for a few years makes that your strain can take a bit. It is the care taker that has to notice that the pigeons are feeling well on the loft and that there is the need to make adjustments, and this is something Hilde does as one of the best.
The widow hens can pair up freely as Luc and Hilde are convinced that a free pairing lead to motivated pigeons.
Before basketing the (homestaying) cocks are being showed for about an hour and at homecoming they stay together until the evening. At basketing for a greater middle distance race the pigeons get their last feeding at 17h . 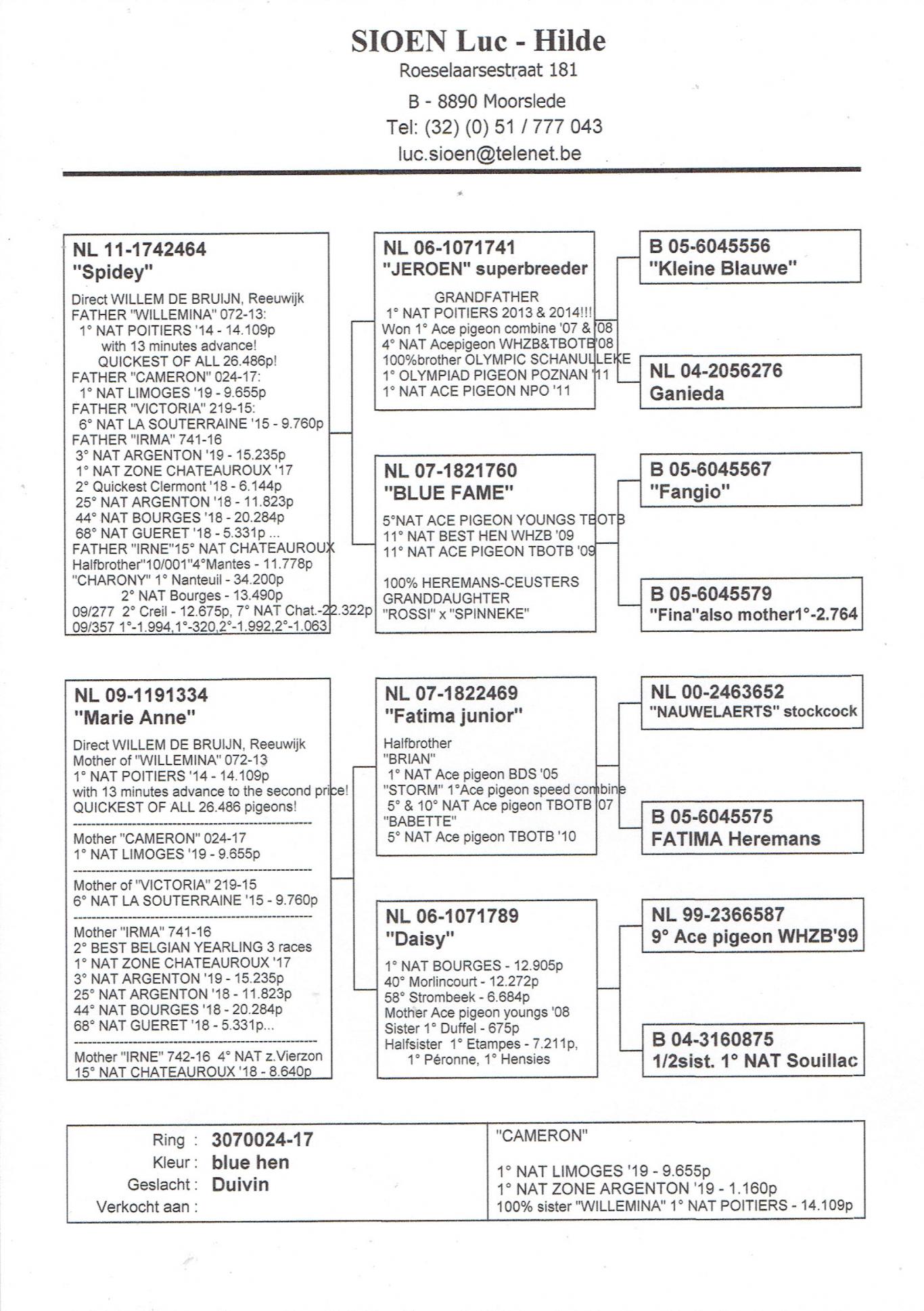