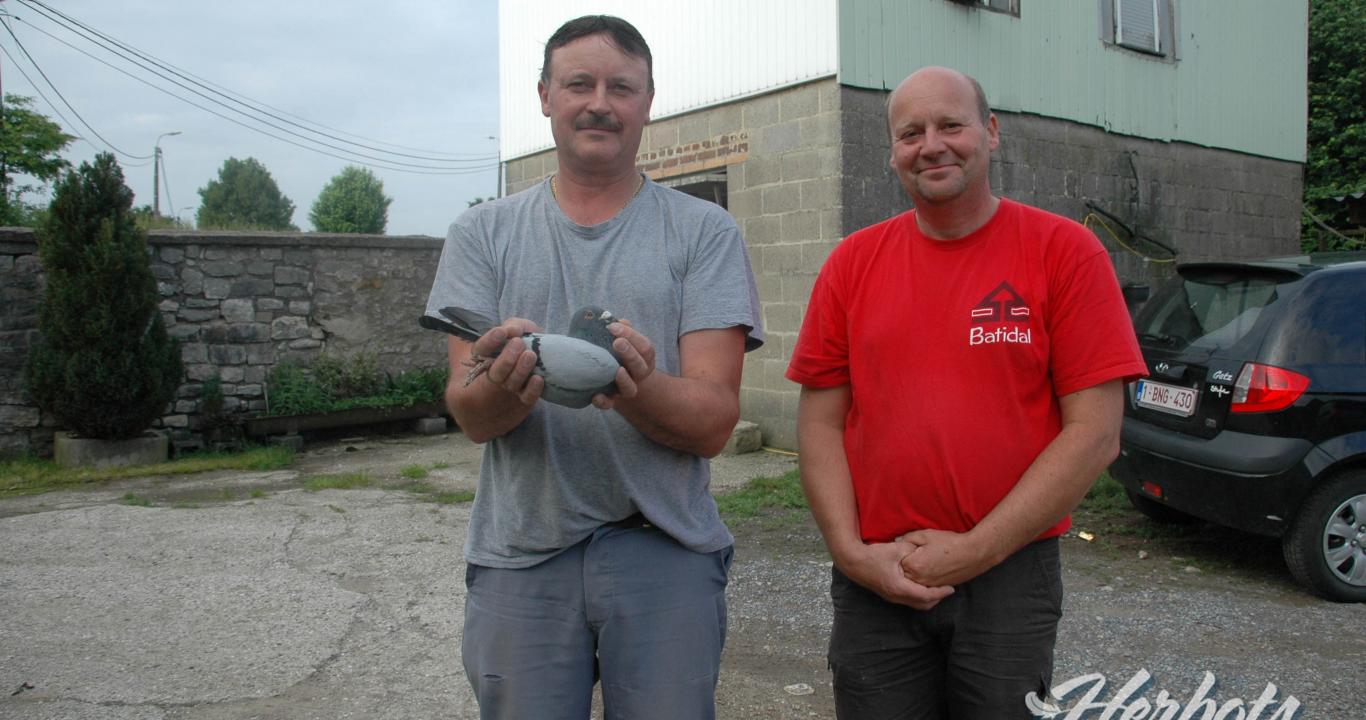 Lambermont: When the 15,763 Limoges racers were being released at 07u30, it was a big guess for everybody to know in which part of Belgium the national top was going to be.  The first 250 to 300km there was east/north east wind and from Paris on there was a south-west/west wind. When we analyse the result now we can state that there were early pigeons in every part of the country. In the top 10 there are pigeons out of 6 different provinces from the province of Liege onto the province of West-Flanders.

Being able to visit the national Limoges winner we needed to drive direction the province of Liege, to Lambermont to be exact (in the neighbourhood of the more known Verviers). In the Rue de Tribomont you can find the house of the brothers Jean-Marc and Alain Caro. At the courtyard of the parental farm they practice pigeon sport and when we ask if they had expected the national winner in their area they both said ‘no’. Jean-Marc explains :’honestly…we weren’t even awaiting our pigeons when our first Limoges races registered. My brother Alain passed just that instant with his tractor when he something going into to the widow cocks loft as a lightning. We felt immediately that this was going to be a very early one…we could never expect that it would be the 1st National.’

The base of the colony Caro was built by late father Marcel. The above mentioned top pigeons were never sold and form the base of the current colony. After their father passed away they raced for a while under the name ‘Veuve Caro Marcel’ but the last 2 seasons the name ‘Caro Jean-Marc’ can be found on the list. The brothers Caro have full confidence in their colony and seldom a pigeon is being added to it. It has been since 2008 that they brought in the last time a new addition to their breeding loft namely a De Rauw-Sablon hen. She got a box on the breeding loft and it was a hit in the rose directly.

A LOT OF BREEDING – A LOT OF RACING AND SELECT HARD

The method that the family Caro follow isn’t something you can write a book about. Pigeon sport is being kept very simple over here and we have the impression that they only have one rule namely breed a lot, race a lot and select as hard as possible.
They started the season of 2018 with a group of 140 widow cocks (divided over 7 lofts whereof 54 old cocks), about 20 hens, 40 breeding couples and 300 youngsters.

15 PRIZES OUT OF THE 18 PIGEONS NATIONAL

On Limoges Jean-Marc and Alain basketed 18 pigeons. On the national list (prizes per 4) 15 of them have placed their ring number on the results list. Speaking of a top result:

Jean-Marc and Alain…the entire Herbots team likes to wish you a big congratulation and lots of success in the future !