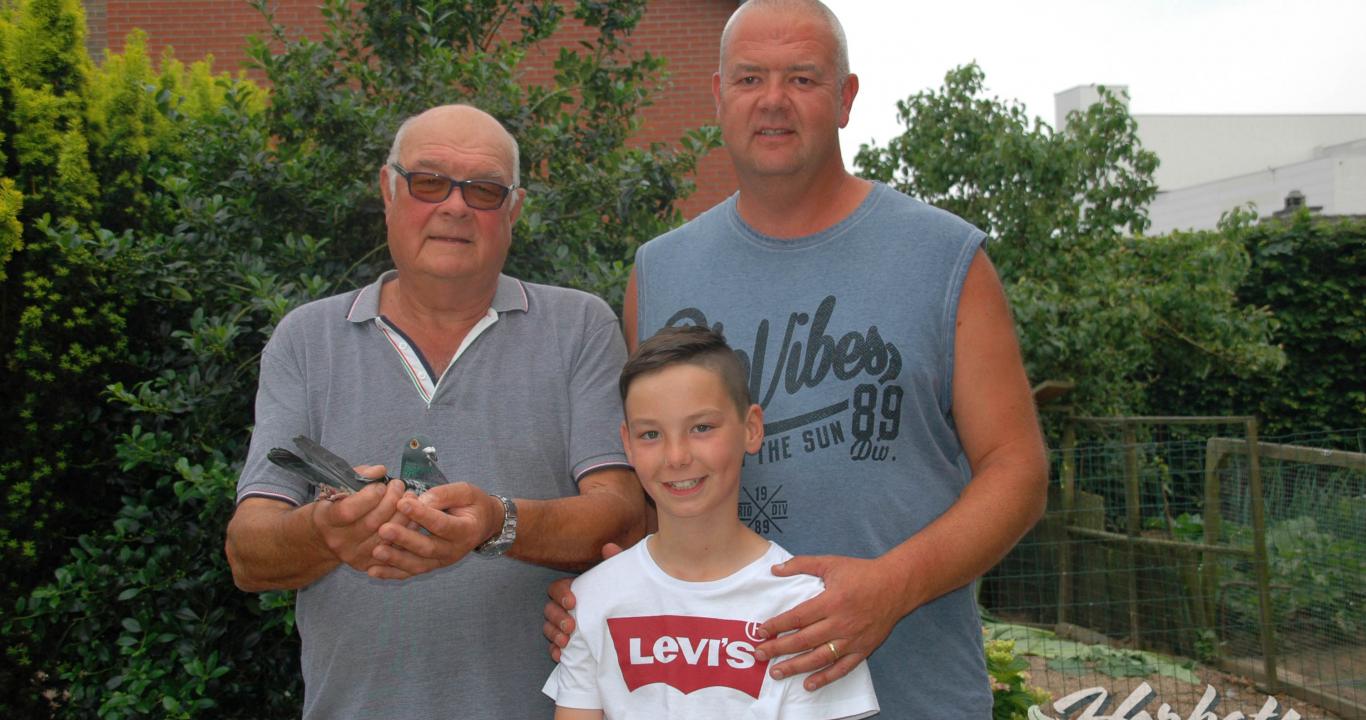 Deerlijk: Roger Vervaeke has been a pigeon fancier his entire live…he used to race together with pharmacist Laevens. They won together in 2006 National Gueret (530km) young birds. Their blue hen B06-3016297 was fastest against 10,523 young birds. After the national victory, Roger and pharmacist Laevens decided not to race together anymore. Roger got all the pigeons an placed some new lofts in his garden.
The class was still present and the name Vervaeke came quick enough again on top of the results. In 2011 their blue cock, the B10-3067062, won the 1st Nat (z) Chateauroux 10,587 year birds (2nd National against 25,263 year birds) and in 2014 Roger and his son Jurgen made it to the spotlights again when they won the “Flanders Field Pigeon Classic” against 24,014 young birds. This was a provincial race on the occasion of the 100-year memorial of the awful 1st World war.

And now…season 2018…national Chateauroux winner against 27,047 year birds. A marvellous national victory where we can only conclude that the superb shape on the widowhood loft of these West-Flanders guys resides as they won two weeks ago already the 6th and 7th National Bourges against 19,133 year birds. Results that count !

The Vervaeke colony is based on pigeons from Leon Rigolle, Vermeulen Dujardin, Devlaeminck Lucien, Chris Debacker and Anthony Maes.

Just 12 widow cocks looked into our direction when entering their loft. Roger: ‘I started the season with 16 but as you can see I live just underneath high-voltage cables and already 4 died in them. End of November I coupled the widow cocks and they could raise a couple of youngsters, after that everything was being separated. Beginning of April their partner came on the loft again and after breeding for 4 days the ladies were taken away and the cocks were on widowhood. From the first weekend of April they have their first short distance races and then it went onwards to the nationals.
In a matter of care their isn’t much to tell. We feed mixtures from Van Robaeys and during the racing season we prefer the mixtures without peas. I buy ‘Race without peas’ (Nr.29) – ‘Purge Casaert’ and normal purge. These are the 3 different mixtures whereof I mix 4 boxes with each other, in total 12 boxes and I add one more box of Bordeaux corn. Once the widow cocks have races further then Paris my own mix is being enriched with “Energy mix”.
Every fortnight I add during a few days brewers’ yeast of de brewery + minerals over the food. Medically we visited a vet before the start of the season and all was fine. Only in April they got a trichomoniases pill, nothing else at the moment.

Since the first weeks of the widowhood the cocks showed signs of top shape. When they train during the week it is always for a full hour and when I call them in there are always a few missing. Seldom seen…don’t ask me how this kind of shape made it to the loft as I’ve done everything exactly the same as all the former years.

To get back for a moment to the national Chateauroux winner. This well-feathered cock is of the average to smaller type. Fourteen days ago, on Bourges national, he didn’t get home on the day of release only the day afterwards at 6h15 he was waiting on the sputnik. ‘This isn’t something they’re doing to me again’ is what he must have thought as on Chateauroux he came, as chased by the devil, out of the right direction and didn’t waste a minute.
Jurgen: ‘Afterwards it is always easy to talk…but I did expect a nice result from him. When I wanted to take him out of the basket at basketing he was lying entirely flat on his belly resting. Experience taught us that this is a very good sign.’

Before, the national Chateauroux winner, got underneath results:

Roger and Jurgen… again a big congratulation from the entire Herbots team and do enjoy this 2nd national victory!