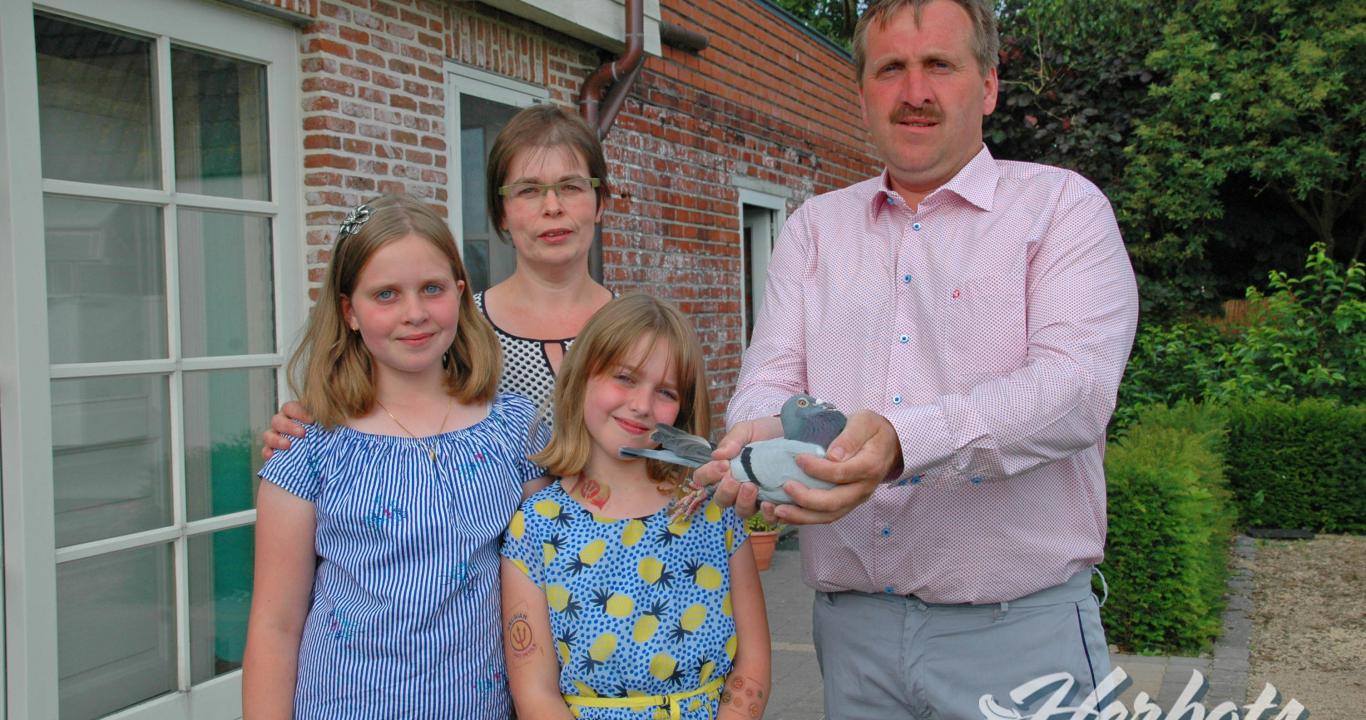 Gavere: In 2014 the colony of Jo Bauters shined for the first time by winning in a magical way 1st National Poitiers (a real hard race) against 12,377 pigeons. It was their cock ‘Fabian’ that confirmed his pure class. Two seasons later (in 2016) the national pigeon press had to go to Jo and Mieke Bauters again as their young hen ‘Ellis’ (a granddaughter ‘Fabian’) became 1st National Ace bird KBDB Great Middle Distance ! And now again two seasons later…it is ‘Totti’ that wins 1st National Cahors against 6,356 old birds or to say in other words, they can’t get much happier at the Bauters family.

Jo Bauters lives together with his wife Mieke and their two daughters (both race since this year in their own name and with their own loft with young birds) in the Baaigemstraat in Gavere. He also was infected by the pigeon germ since he was very young and as we all know this is a nice germ to have, not deathly, slightly addicting and one that can give you a lot of pleasure. On a relative young age he learned a lot from his late father Andre Bauters who was a short distance racer. Jo wanted to test these pigeons and go a bit further with them and this with success.

A slow but certain growth in results

Jo and his brother started years ago their own company in roofing. Due to their big efforts this company grew and grew and there wasn’t enough time left to practise his hobby in a descent way. A while ago they decided to sell the company and since then Jo and his brother are construction promotors. Now more time is available to focus a bit more on his hobby. The racing pigeons (youngsters and widowers) live on nice, healthy and airy garden lofts. The breeders live in a site building attached to their house.

The first strong results were set by Jo with pigeons that he got at Eddy Vandriessche. Eddy owned in particular the strain Gevaert – Vanschoorisse from Ronse. This was being accomplished with a few pigeons from Marcel De Beck from Baaigem and Dany Deketele from Waregem. These pigeons were especially strong on the short distance and middle distance. Later, pigeons from Edmond Stockman from Meilegem (strain Vandenheede from Zingem) came on the loft and recently (so wait and see what the breeding results will be) also pigeons from Team Dejaeger, Gino Clicque, Rudi Desaer and Frederik Leliaert. Also a hen out of the strains Jan Haesaert x Marc Adam x Charles Vanlancker (all three of them from Oudenaarde) gave top results at the loft in Gavere.

Jo emphasizes that the entire care of the pigeons stands or falls with the support of his wife Mieke. Without her - no top results ! Jo has to go out for work a lot and to have a correct and punctual care he relies on her support. Everything is being taken care of to the last detail.

The loft exists out of 25 breeding couples, 35 widow cocks on classic widowhood, 18 hens who also are being raced on widowhood and about 100 young birds.
The widowers were being coupled very early, could raise a couple of youngsters and were separated in due time. Before the start of the season the hens came onto the loft again and after a 5-day breeding they were on widowhood again.
The quality mixtures from the Versele-Laga gamma are being given (Dark Plus I.C. gamma) and the schedules advised by the producer are being applied.  They can eat all they want, but after that a few of them go off to drink the food is being taken away.
In a matter of supplements the products from Brockamp are being given. Medically the advice from Piet Blancke is being followed. They cure before the season and the racing team is being ‘purified’ before the start of the season. Every 3 to 4 weeks they get a preventive check-up and if necessary they cure.
The loft feels very pleasant and this is according to Jo for a big part due to the little aviaries in front of the lofts. These aviaries are foreseen with wind break netting (90%) and the bottom of the aviaries is closed up. During the day these are fully open and during night time the entrance is being closed. Also, all the lofts have ATX – plates which take care of the perfect humidity.

The national Cahors winner got the name ‘Totti’ and was basketed with three loft mates for Cahors. ‘Basketed without any ambition’ says Jo ‘I would like to race more and more long distance races and honestly I basketed these 4 pigeons as a test. Just to see whether I’ve got the right kind of pigeons for the more heavy work and apparently I have. This victory is an extra push in the back to try it on the long distance races. We’ll see where we’ll end up…’
“Totti” wasn’t motivated in any special way. On the day of basketing he just got to see his nest dish but it seemed more than enough to conquer the race.

Jo, Mieke and kids…a lot of success and see you again at the next big feat of arms of the Bauters colony.