We don’t pass by the tandem Swinnen – Vanhove from the Brabant province Zichem that much but when we pass by it is for a real icing on the cake. We’ve already visited them in 2013 for an Ace bird on the extreme long distance, they won then with their top hen ‘Magda’ the 2nd National Ace bird KBDB on their favourite discipline. Now, a few years later it is the same blood that strikes again but now it isn’t a silver but a golden medal ! Their newest top hen is called ‘Lore’ 2024985/2015. She shined both in 2018 as in 2019 on the extreme long distance races and wins no less then 3x TOP 31 National but the best is what she managed to do in 2019. Again she wins twice against the wind in a 4th National Agen and a 6th National Perpignan, on these races the first arrivals were in the East of the country but that didn’t stop her to race twice straight to the top. So, with these results is how she won the title of 1st National Ace bird Extreme Long Distance Old KBDB 2019, really well done François and Magda.

Francois learnt about pigeon fancying from his father Edmond, in 1965 he placed his first steps on the pigeon loft when he came back from school to help out his father. This continued on until 1973, when he started out on the current lofts here in Messelbroek. The pigeons that set the rule over here were bought in the beginning at Léon Ghilain ( Ronquières ), Felix Vanderhaegen ( strain Imbrecht ) and Nest Isenborghs ( won 1st I.Nat Pau and wanted François to race these races as well). This was the base how it all started, afterwards he got some pigeons at Albert Bils who matched extremely well with pigeons from Maurice Van Schaeybroeck who had pigeons from especially Gaston & Danny Devooght. Out of this last combination ‘Magda’ was bred who didn’t race well on her own but turned out to be a really good breeding hen. A lot of references are already to be found on other lofts who succeeded well with pigeons out of this breeding strain. Like for example at De Smeyter – Restiaen ( 9th Nat Barcelona ’19 and 64th Nat Perpignan ), Stijn & Jeroen Rans ( 73 Nat Narbonne ), Francois Van der Troost ( 1st National Champion extreme long distance ) and Hok Rommelare ( 1st Nat (z) Jarnac ’19 year birds ).

To make that the pigeons don’t only have the extreme long distance blood he went to Deno – Herbots in Leefdaal. He took 2 pigeons, a cock and a youngster that in fact was too young to be left alone. This youngster became later a beautiful cock and is a full brother to ‘Yvan’. This crack took care of beautiful weather at the Herbots Bros but his brother does an amazing job here on the breeding loft and is great-grandfather to ‘Lore’.

The racing team exists out of 36 couples, old and year birds together, cocks and hens. Yearly this team is being strengthened with young pigeons and a group of late youngsters. During the winter period François gives the yearling cocks a box so they will be more box attached by the time the ‘old’ team comes along..

The racing pigeons reside the entire winter in an aviary and will be placed back on the racing loft on the 1st of March. They come out rather quick from then on and a rotation system is being put in place. The hens train first, the cocks move onto the hens loft and the hens come in on the cocks loft. But they can only come in the hall after training otherwise you can’t keep the hens calm and will they become too eager to mate. After the cocks have trained everyone is being placed again on their own loft.

This ritual is being repeated during the season twice a day and like this they are being tossed until 35km. From then on they go onto the short distance races and will normally do 4x short distance and 2x middle distance. Around the 20th of May they start of on Vierzon to bring all the pigeons on speed for the long and extreme long distance races with as end goal off course Perpignan. Afterwards they get their well-earned rest until the year after.

But it is so that all the pigeons race weekly, mostly a long distance race every 3 weeks but in between they have a Momignies or Soissons (short distance). Only the weekend before they will be basketed there isn’t a race on the agenda.

He is also of opinion that due to the really heavy races we had to past few years it isn’t that important anymore for him that they train twice a day. That’s why he will have a closer look at that for the season of 2020 and will let the pigeons train less during some of the weeks.

Why do you race total widowhood with pigeons that can arrive at various times?

I believe that total widowhood is the ideal motivation for the long distance game, at basketing I don’t motivate them and they won’t see each other. At homecoming it is always chaos on the loft and almost never find their own partner. To be able to get some love anyhow  they look for another cock or hen which is good for the mutual motivation on the loft..

The only problem here is that sometimes pigeons do get demotivated with this system that I decided to change onto the nest game next year. If I don’t like that I will change really quick again onto my old system.

Lore herself is a late youngster from 2015 which wasn’t trained in her birth year, as a yearling and old hen, she raced 4 races above the 500km. Especially in 2018 and 2019 when she has to ‘sleep over’ she is at her best/. Normally she had to race Agen and Narbonne in 2019, but the week of Narbonne I didn’t think she was already 100 ready and gave her an extra week rest. Perpignan had to be her goal and she has proven it. 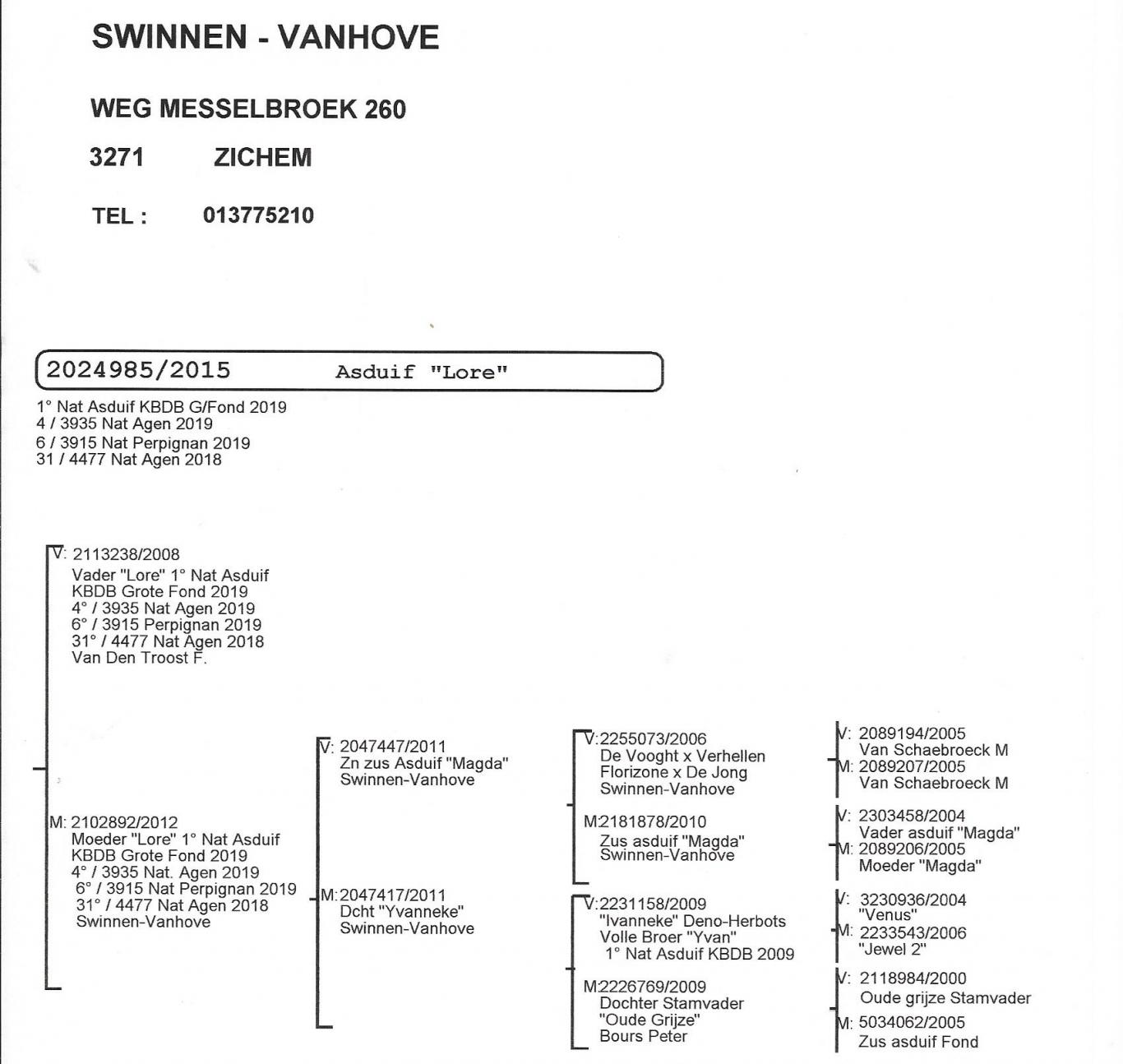 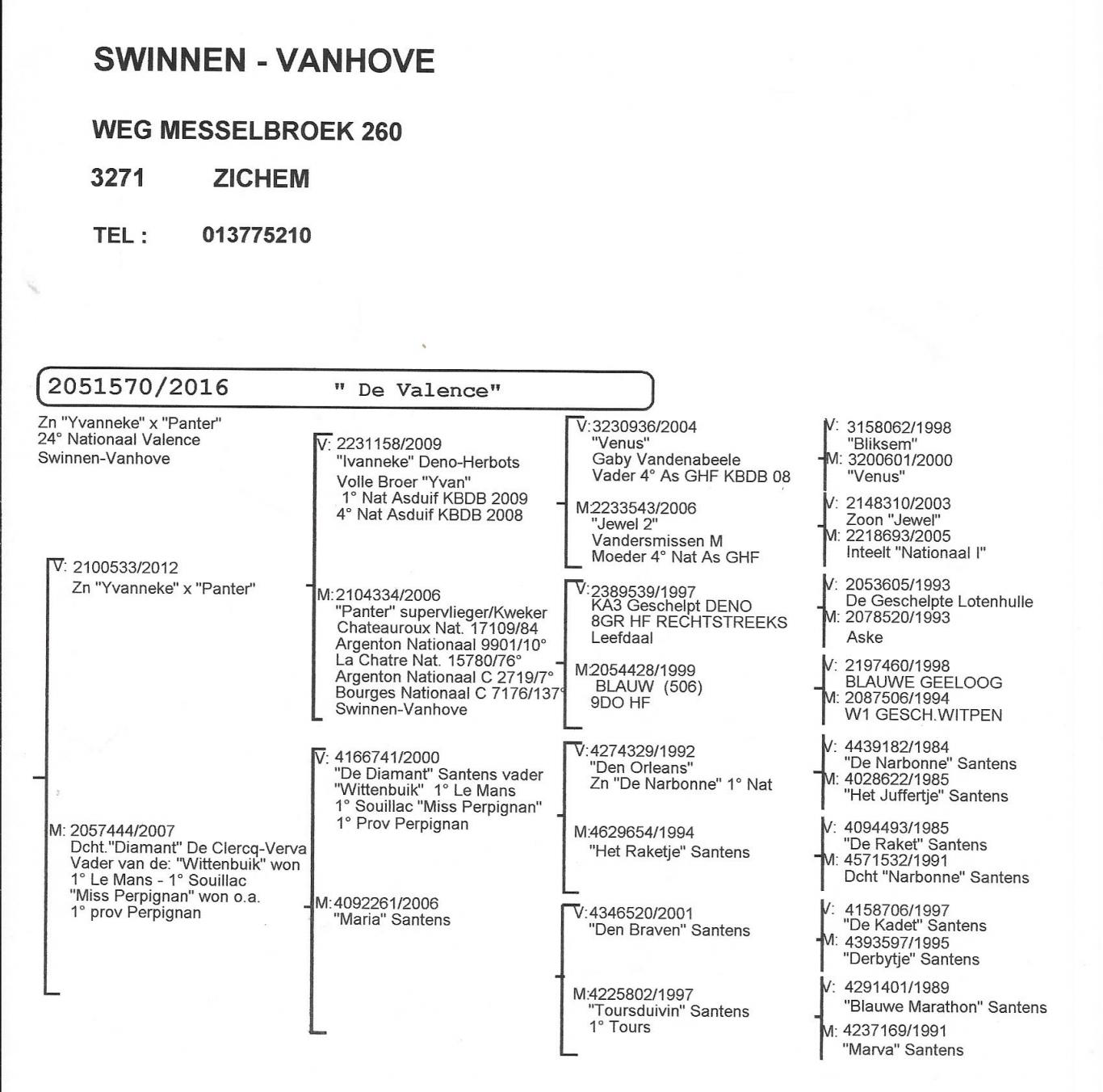 The young pigeons are less important than the old and yearling pigeons. Yearly they breed about 100 youngsters to race with whereof about 50 will remain. This season that raced until 350km. They are being raced amongst each other and pure nature wise, is one is less healthy it will have to get its act together or it will be removed of the loft.

Nature I just spoke about is present 365 days a year over here. They get a homemade mixture which is the same as Kaubacam. Next to that also garlic is being put in the drinking water after the season until the garlic turns bad and then a new one will be put in and only then the water is being refreshed. Also the use of antibiotic isn’t something known so the pigeons have to possess a very high natural resistance.

In a matter of food recuperation is of importance. At arrival the get a recuperation pill from Röhnfried and the first 2 days after arrival the pigeons get a breeding mixture together with Tollyamin Forte from Schroeder Tollisan and honey is being added to the water. From the day after until Friday they get a mixture that is 50% protein poor and contains 50% sports mixture. In the weekend it is again during 2 days breeding mixture.

As extra’s he uses on Mondays elderberry syrup and Joost Mix over the food, on Wednesdays it is oil with vitamineral from Natural and on Fridays oil with Joost Mix.

Mostly I treat the pigeons before the season starts of, but this season they looked that well that I didn’t do anything. I just started off in May by giving yellow drops once a week at arrival via their drinking water where they can drink of one full day. At basketing they get a drop in the beak individually.

Francois and Magda, a big congratulations with this top hen and with the winning of the Ace bird title and this from the entire Herbots Team.