Geraardsbergen: Like every year, they were doing a great job again and here we are talking about the tandem Bjorn Haak and David Soen. They focused on the great middle-distance races and we can say that they know exactly what they are doing. For the first national race of 2022, they had 24 pigeons in the baskets and no less than 10 won (club level) in the first 10% and 22 won in the first 33%. A promising start as they say and 1 week later it was already bingo because "New Frans" (B21-4012403) shone with 1st National (z) against 2.736 yearlings. 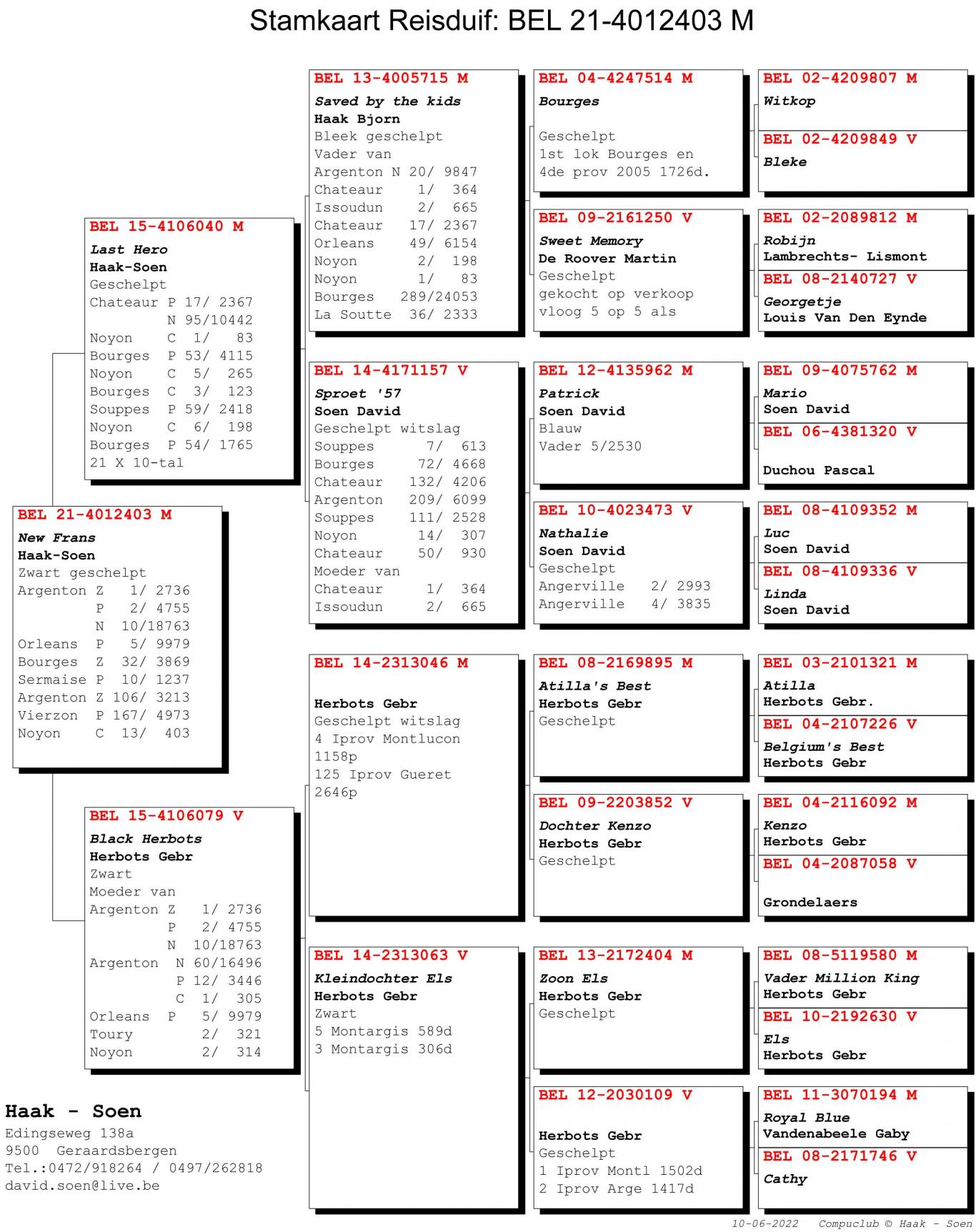 The "New Frans" was not especially motivated. As always, the widowers only got their nest bowl for about 10 minutes on the day of basketing and the housing was completely opened. There was no question of showing a hen.
The result on Argenton was more than impressive with no less than 3 pigeons in the Top 100 national, namely: 10th and 38th national against 18,763 yearlings and 98th national against 20,467 old pigeons.

System
For 2021 the racing team consisted of 22 widowers, 14 racing hens and about 90 youngsters. The old and yearling birds are raced on pure widowhood, so with a partner sitting at home.
The widowers were coupled at the beginning of January and raised a couple of youngsters. There was no question of a second pairing in spring. Via short- and middle distance they went to the national races.
During the season, the widowers train once a day (in the morning) but are fed twice a day in a common feeding trough. On the menu are the Plus I.C. mixtures of Versele-Laga. As far as by-products are concerned, products from the range of veterinarian Van der Cruyssen are used as Winner. Energy Boost, recuperation pills, condition mix, Power Fly,... are provided almost weekly.
From a medical point of view, we go for a consultation some 3 weeks before the start of the season. Before the season, there was a cure with Soludox during 5 days and since then the medication cabinet has been closed. Against tricho, yellow drops are given weekly.

In 2015 Bjorn Haak and David Soen decided to join forces and form a "pigeon team" together. Both gentlemen could already present the necessary letters of honour but since both Bjorn and David have to combine a full-time job with a family with growing children, it was a bright idea to go for it together in the pigeon sport.
Both have a predilection for the great middle-distance races and these are also marked in fluor on the racing calendar. Races like Argenton, Chateauroux, La Souterraine, Bourges, etc... make their motivation level rise.
Bjorn was born on the pigeon loft, so to speak. Father Frans was a fanatic short distance racer and together with mother Amanda they could even make the drinker fly a first prize. They only had 1 secret... only the good pigeons that were strictly selected every year were kept. After the death of father Frans, Bjorn continued together with his mother Amanda the pigeon game successfully. Also David got infected with the pigeon virus through his father and godfather. David always raced on his own name. In 2013 he became 3rd National Champion KBDB small middle distance.
The tasks were divided perfectly where David takes care of the breeders and Bjorn together with his mother Amanda take care of the widowers, racing hens and youngsters. The basis of the colony is formed by pigeons from Eddy Anckaert, Jozef Wellemans, Martin de Roover, Eric Brootcoorens and Herbots Gebroeders (very successful breeders who already put 2 zonal winners on the world in one year).

The first and last year of Soen-Haak

Just to clarify. Since the beginning of the tandem, the name Haak-Soen is used. But 2022 is the last year that they will race on the old lofts. From 2023 there will only be raced on the new lofts, which are in the garden of Bjorn’s house. The distance between both lofts is only 20 meters but since we are talking about 2 different properties, they had to race on 2 different names this season. That's why Bjorn and David decided to race the old and yearling pigeons for only 1 season on the name Soen-Haak and the new batch on the new installation on the name Haak-Soen. This just for information to make everything clear.

Bjorn, Amanda and David...good luck the next few weeks.