Visiting a new colony just across the border from Belgium and Holland, in Urmond Robin Smeets and Piet Penris live. They run this colony together since the day that Robin got the hang of it in 1999, then it took about 5 years before also Piet started racing pigeons but from the start on this went really well. First off course on those short distance races but in 2010 they had 4 pigeons basketed on Perigeux where 3 raced head of the race. Since then they started focussing on those extreme long distance race and in 2018 they got rid of all the short distance pigeons and their goal is set now on the ZLU races.

The past years Barcelona has become an even harder race as before with as consequence that only very few pigeons participated to a 2nd international race in the same year. Their 'Lucky 38' did do this, a 53rd National Barcelona and after that a 33d National Narbone. He is a half-brother to the 2nd International Marseille 2018 and his mother is out of the old strains from Florizoone x Brothers Kuypers. I'm really curious what this top pigeon is up to in 2020.

How do you race the old and year birds?

We have a racing team of 24 hens and 30 cocks, until last year we raced everything on widowhood until Agen  and the hens went on nest immediately after that. As we noticed that this even gave better results we are going to race the hens on nest from their first race on.

During the Winter period only the best old pigeons can breed one round of youngsters. After this there isn't a second coupling until the season starts off.

A thing that is important for them is the training in Spring and during the season itself. The widow cocks train mostly twice a day unless they train really hard the 1st training as we don't want them to train of all their energy. For the hens it depends how we are racing them at that moment, are they on nest than we will toss them a bit more from 50km than when they are on widowhood and then they just train twice a day around the loft.

The goal is that the old pigeons race 2 international races or with exception 3 races and mostly these are the ones that do Pau. The old race weekly in April and May and get mostly a Limoges (that is now being replaced by Montluçon in 2020), a first test beginning of June. Afterwards the team is being divided over all the international races. For the yearlings it is important that they do Limoges, Agen and Narbonne.

So in 2019 the hens raced until Agen on widowhood and could have a nest after this race before Narbonne. They were basketed on 10 days breeding with a much better result. So in 2020 we will basket them twice on 10 days breeding and they will train at ease in between and have a short race as well.

Widow cocks on the extreme long distance on classic widowhood....

Yes, we might be one of the few lofts that still do this but the results are good so we will keep this system. The pigeons will always see their hen before the race, at the beginning this isn't very long but once the beautiful races  are up this will be one hour.

At arrival they are being locked up together with their partner, at the beginning they are waiting but once the longer races are up they will only be placed on the lofts from the moment the cocks get home. They don't want to make the other cocks to crazy so we give them eating and drinking separate and can stay together until the day after in the morning. You would say this makes the other cocks crazy but we don't think so.

Toppers  from the past seasons 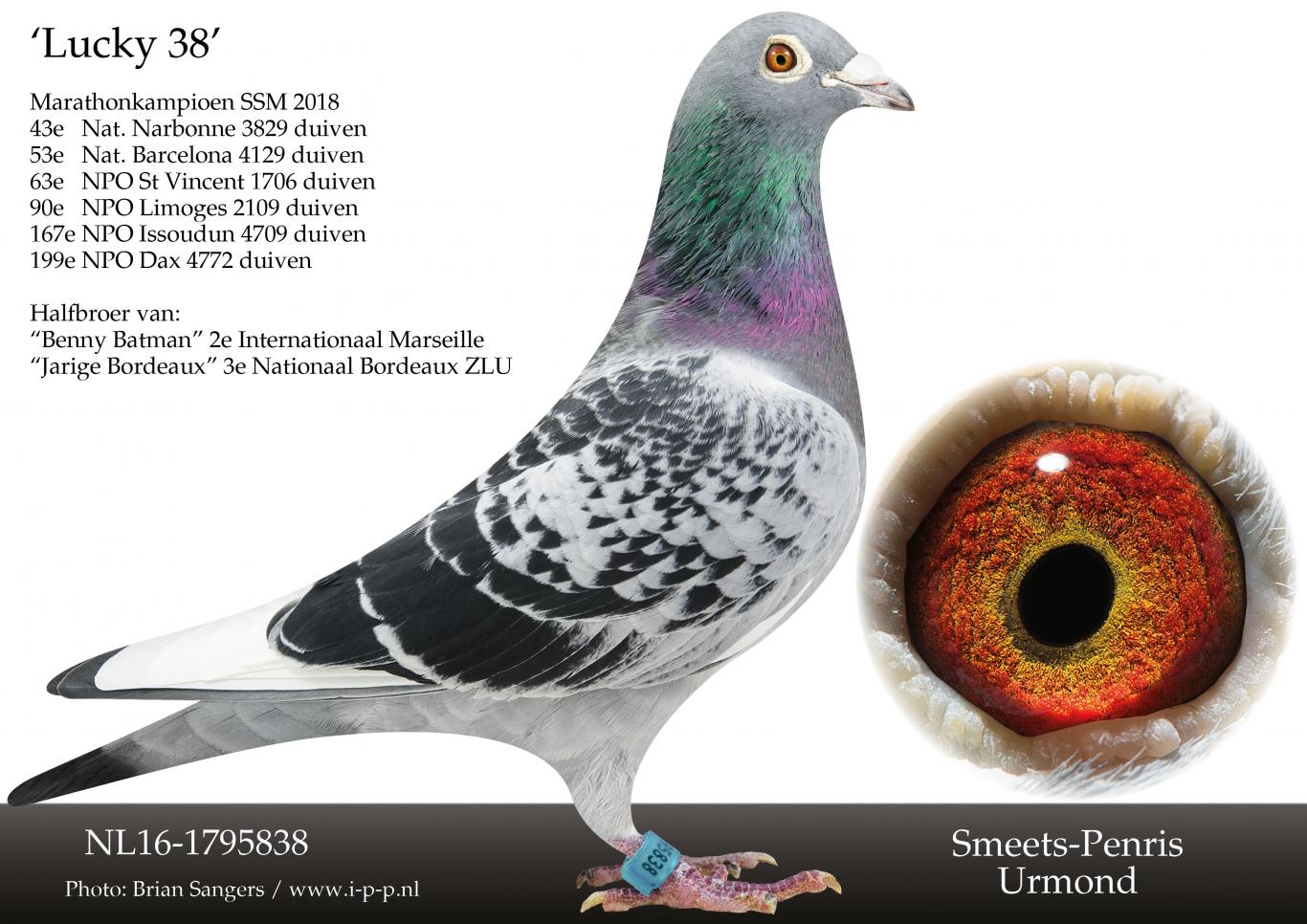 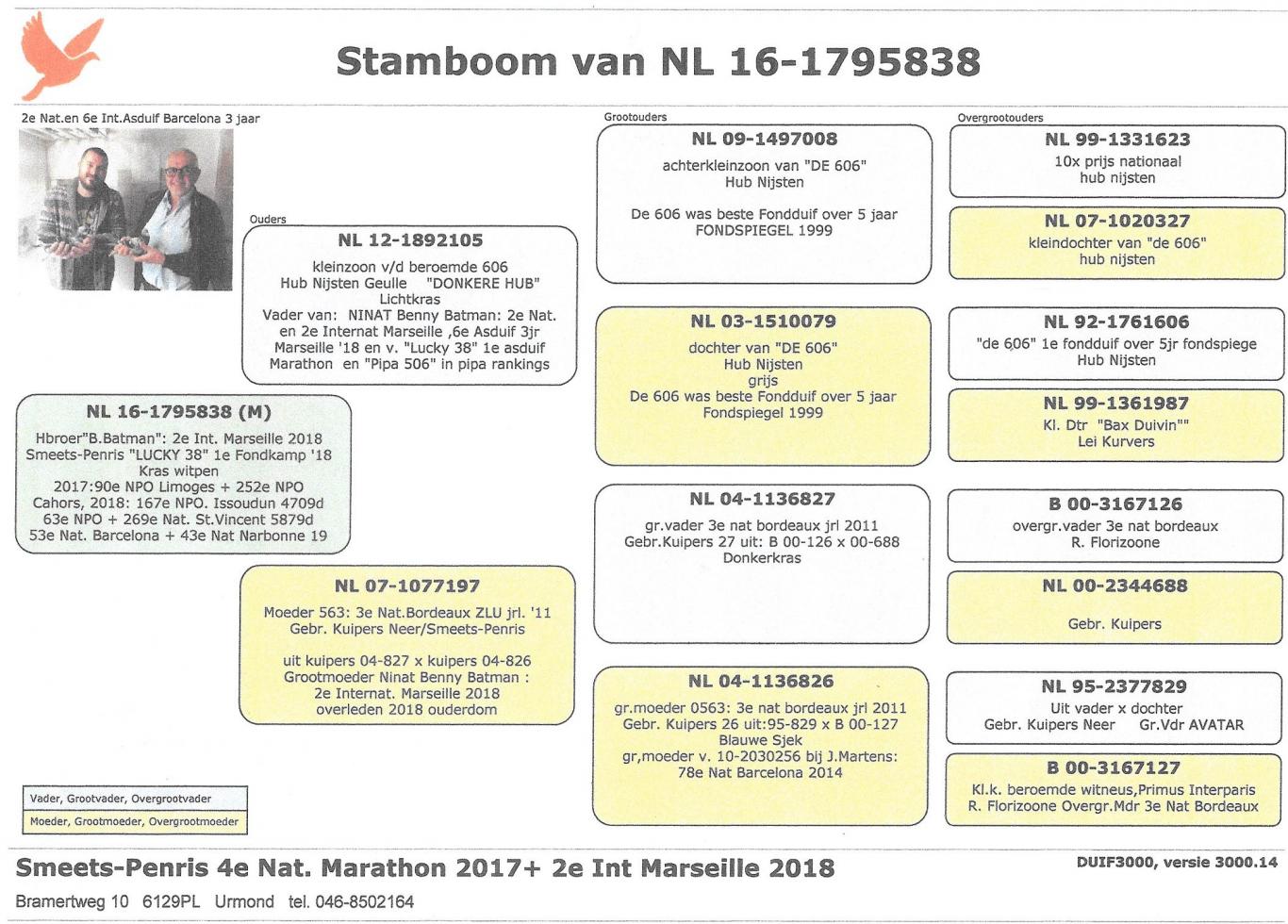 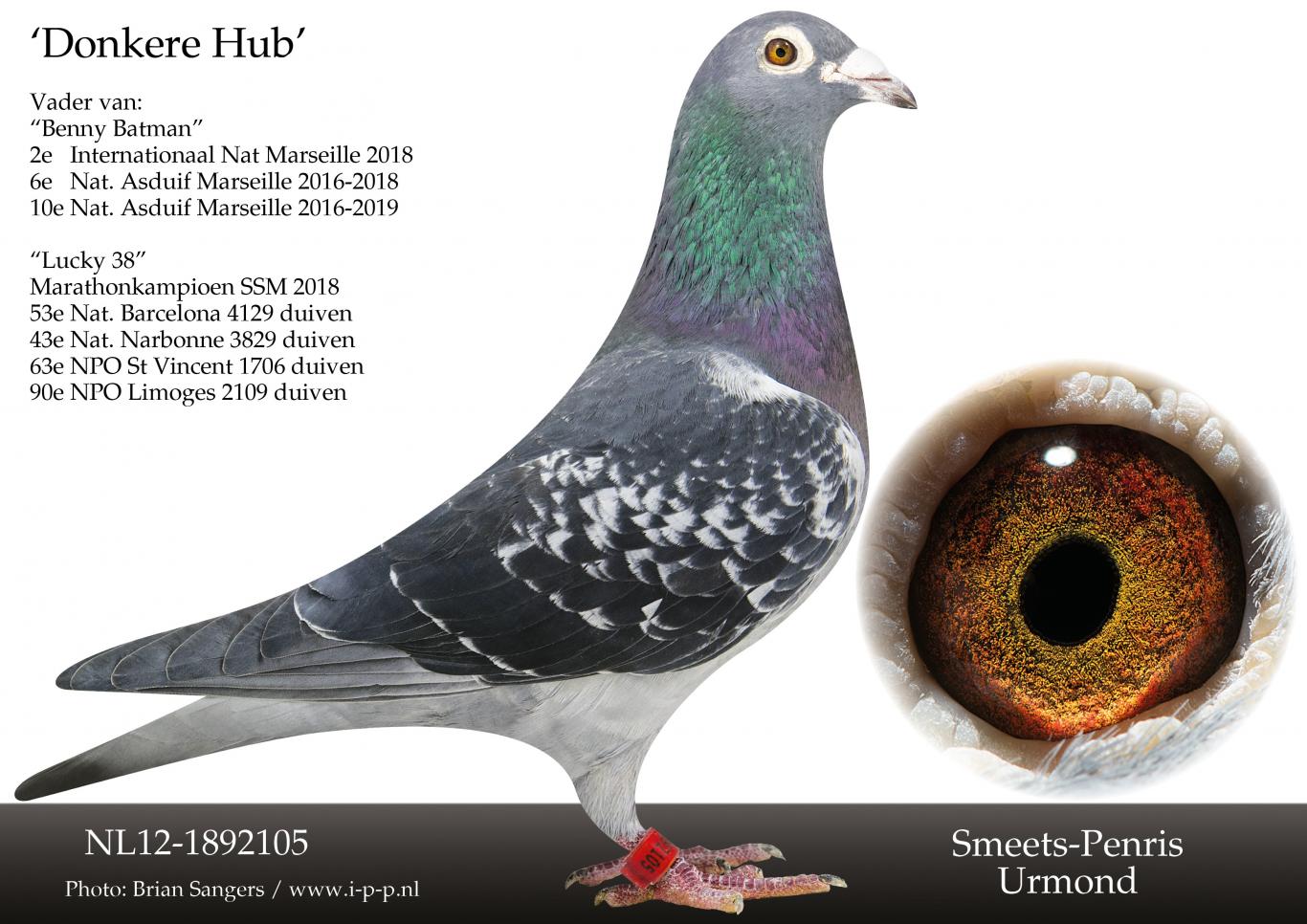 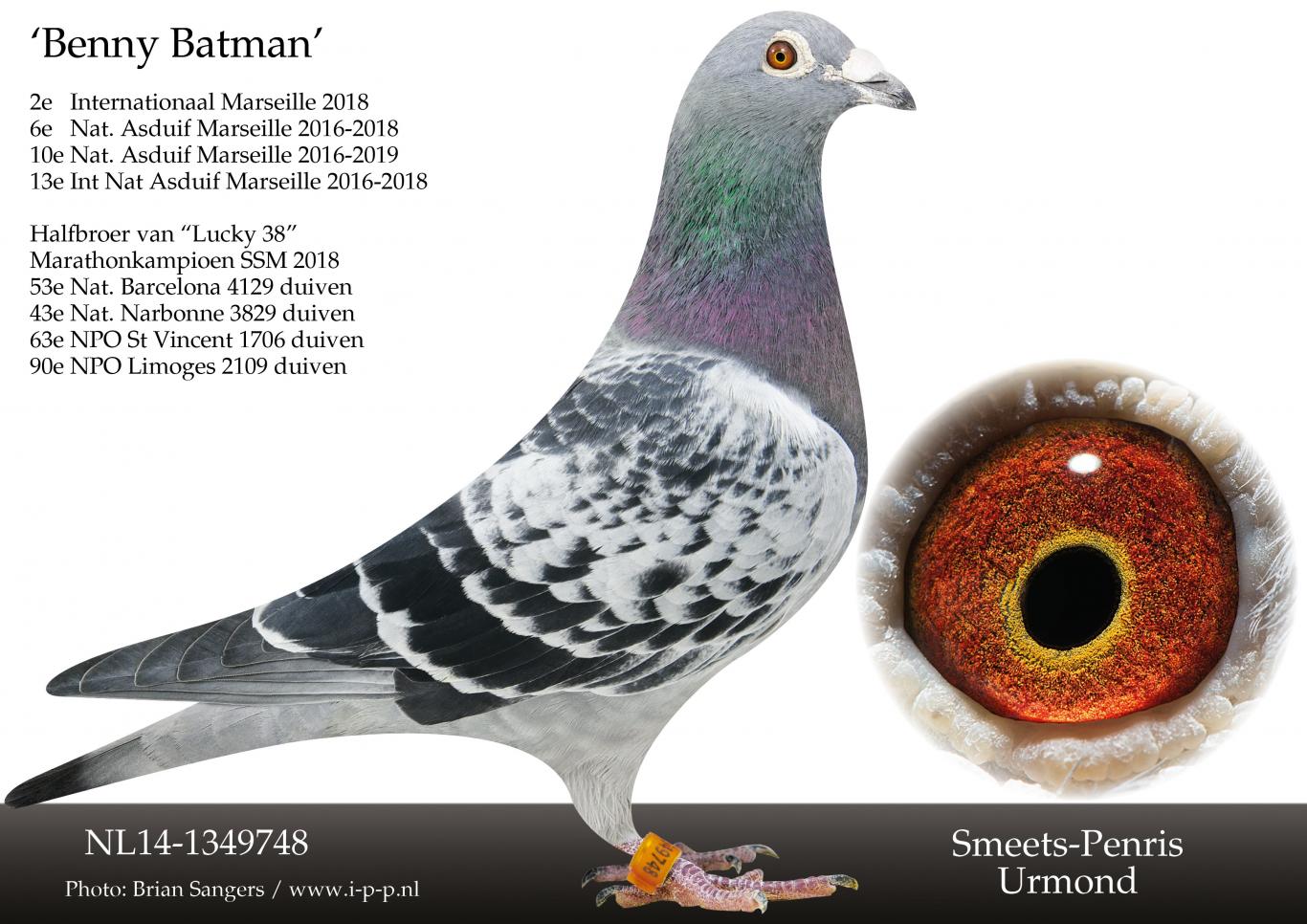 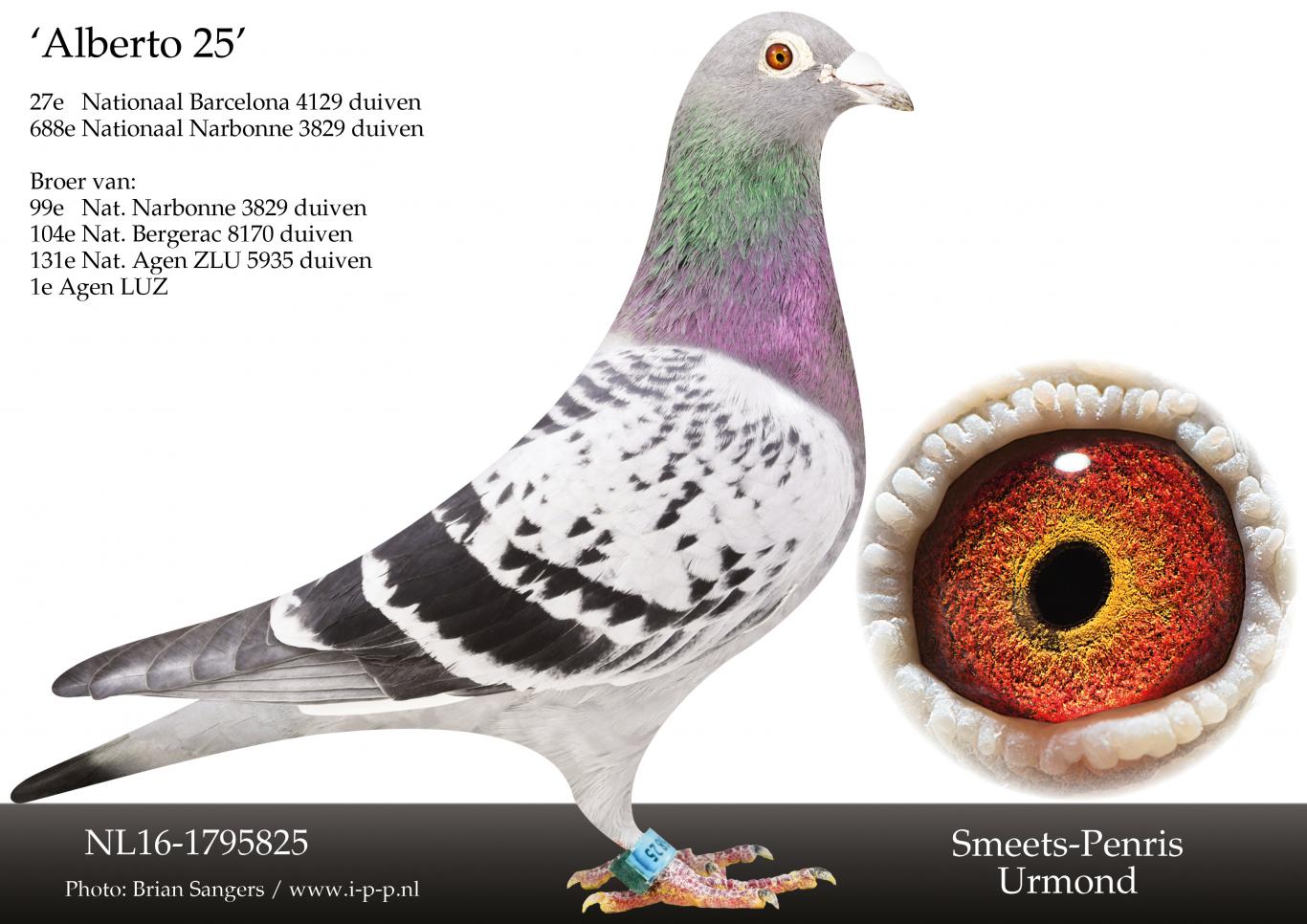 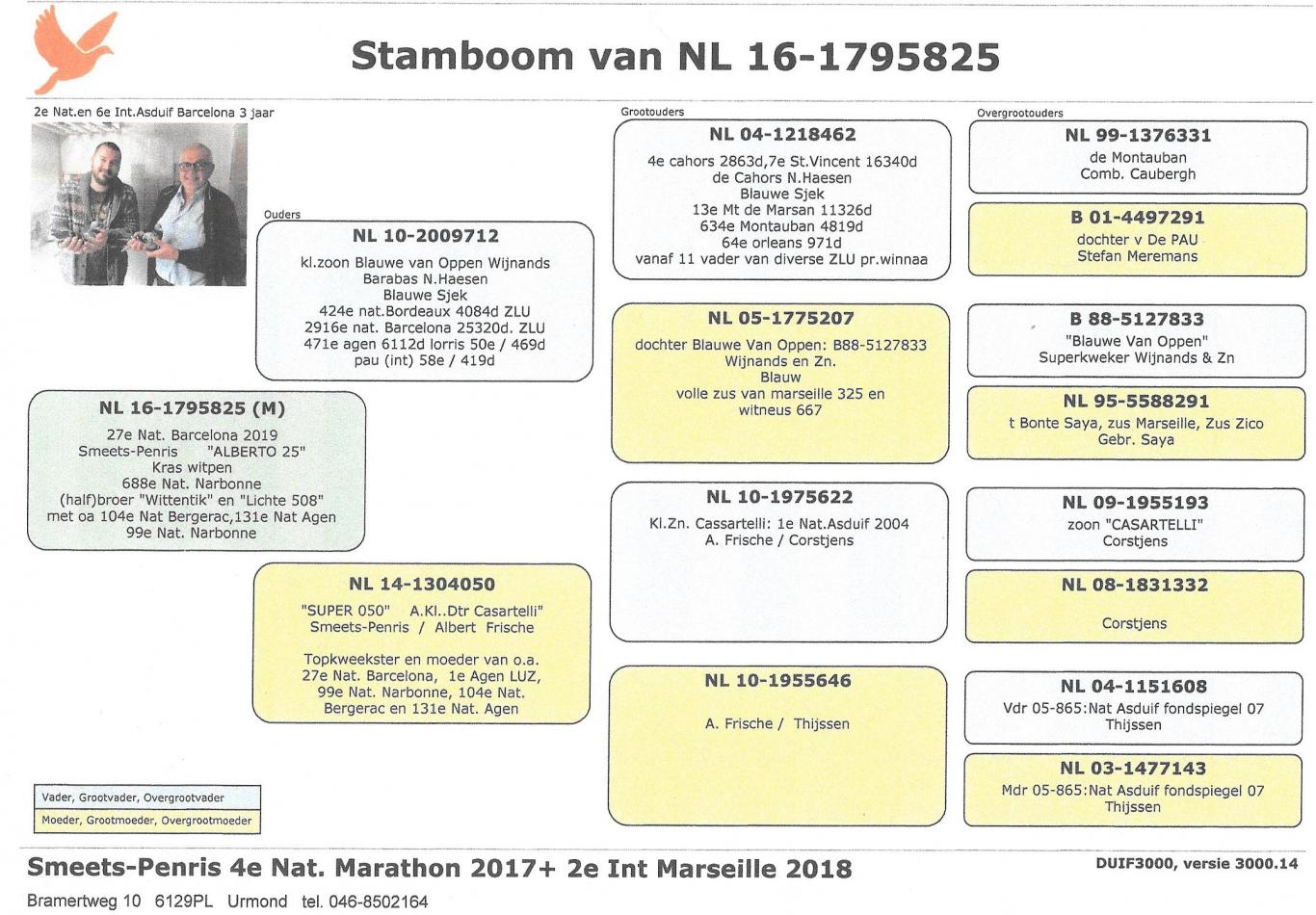 This top cock won 11x prize on 12 races with also these 3 wonderful results on Barcelona. 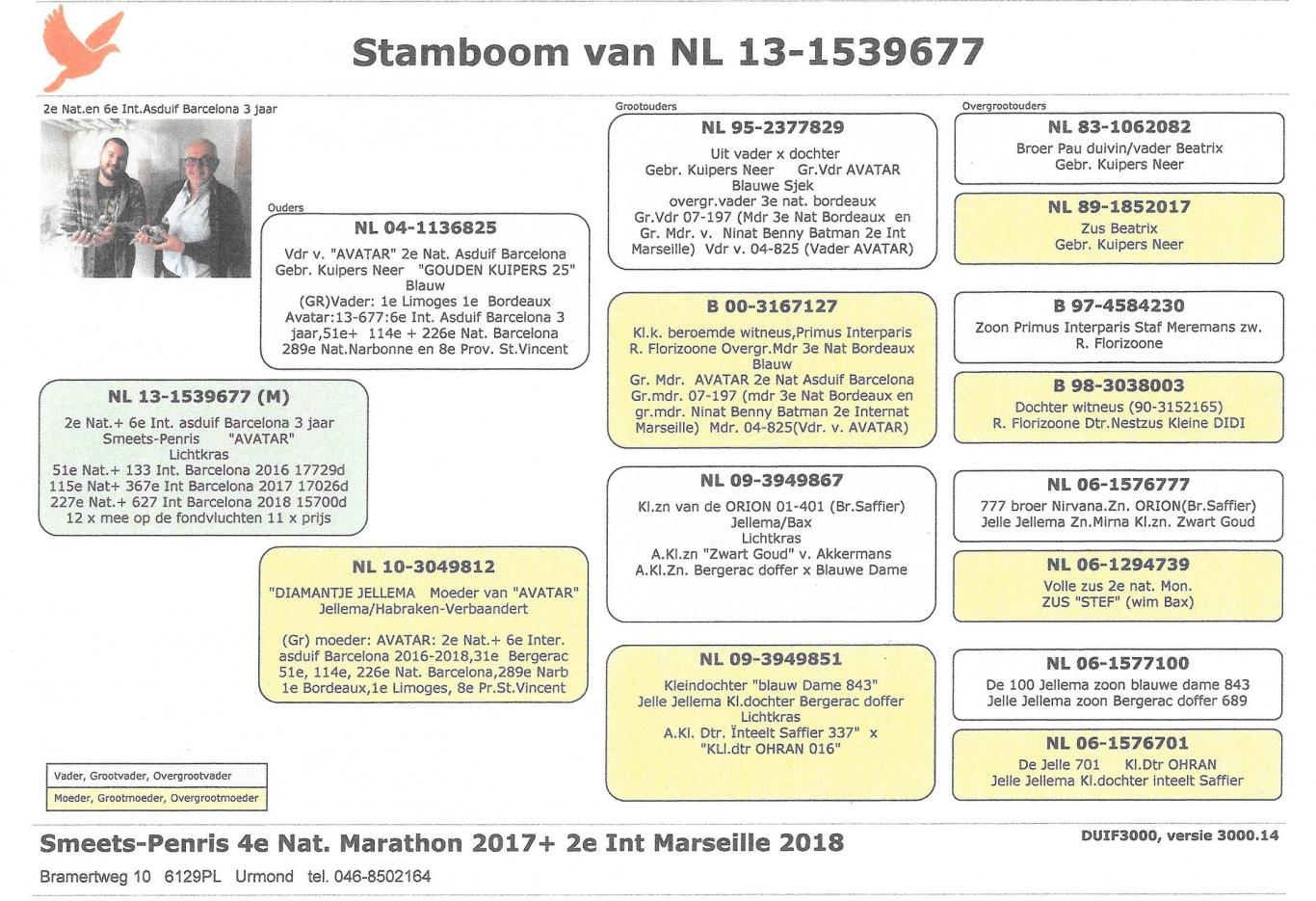 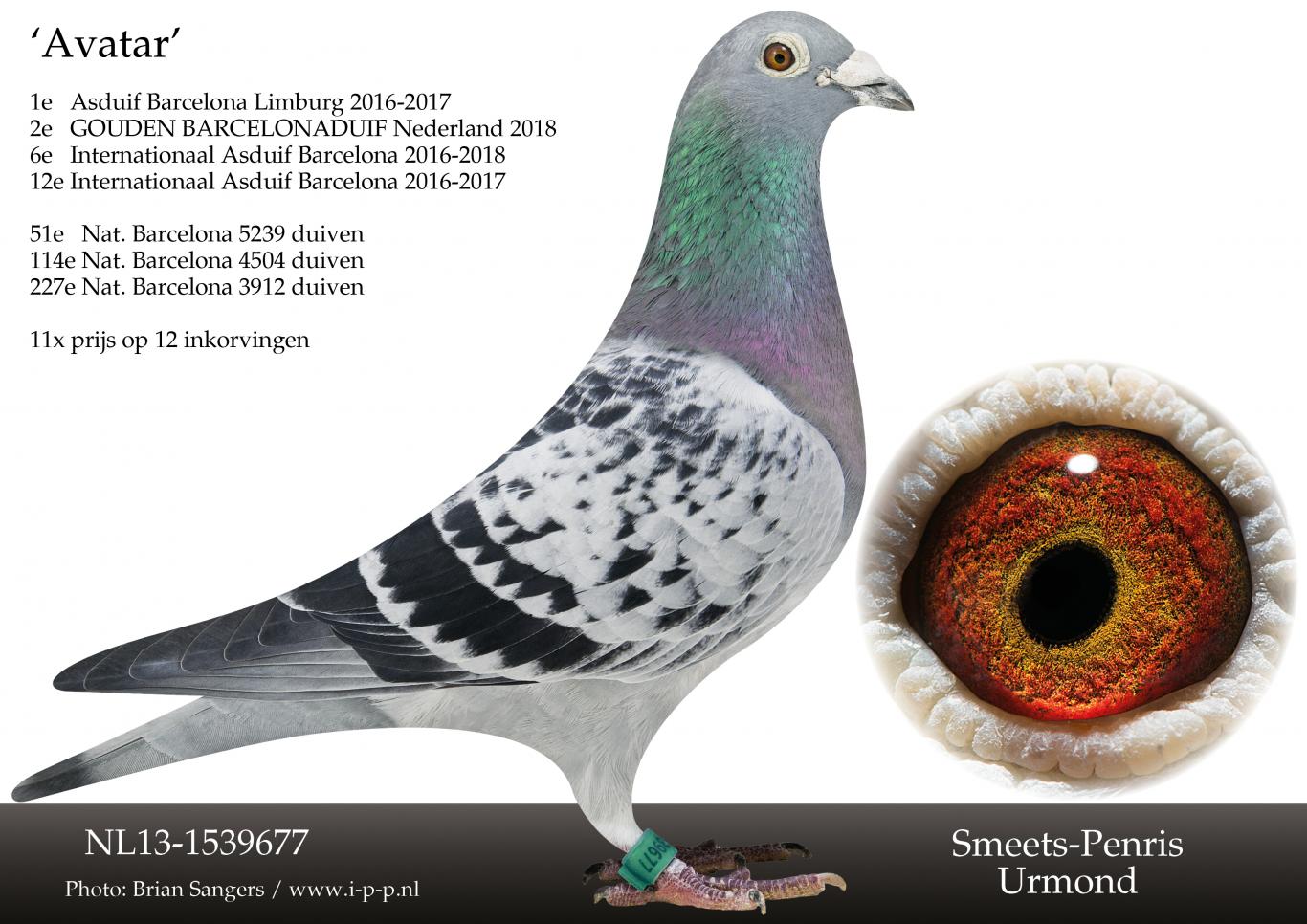 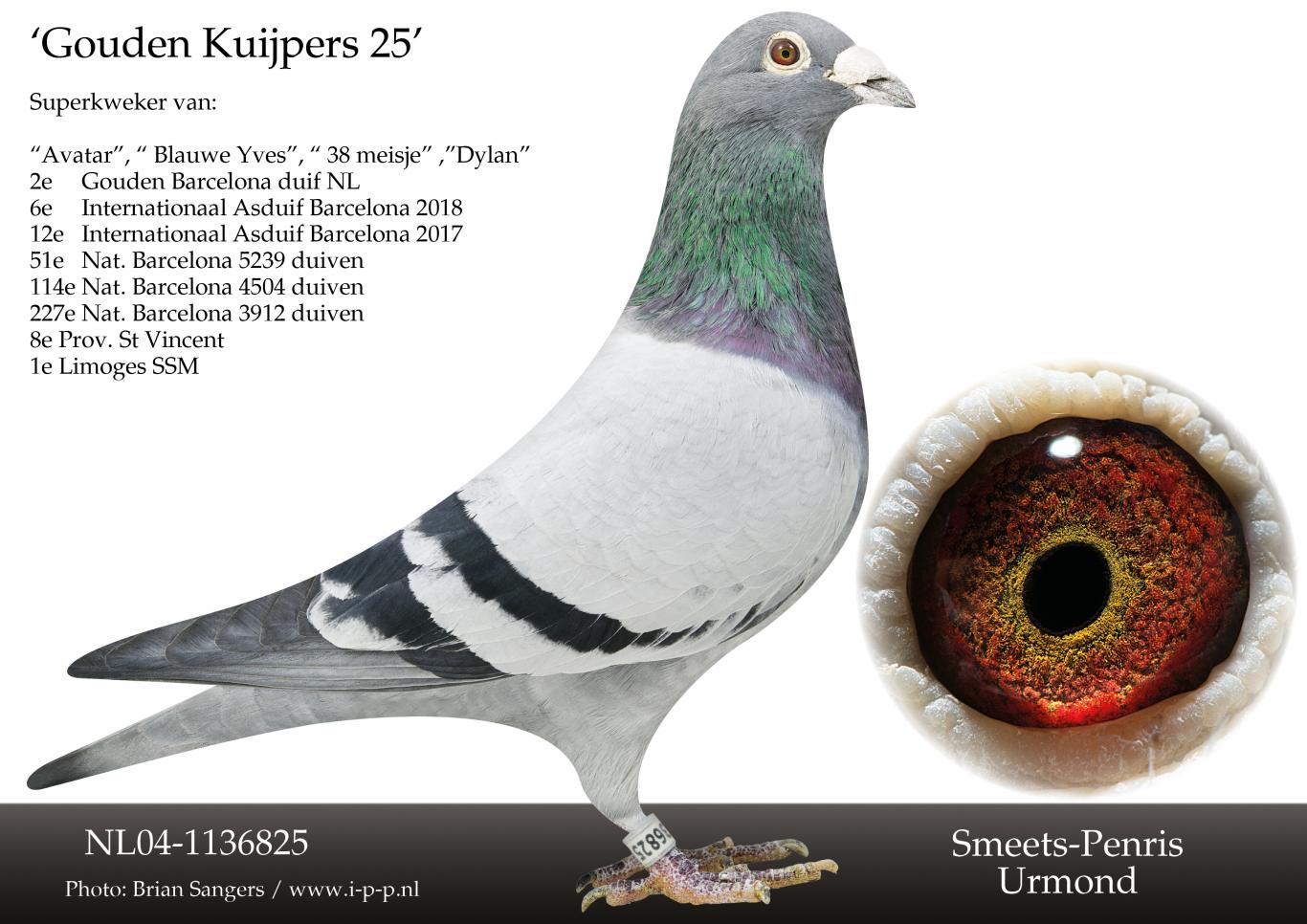 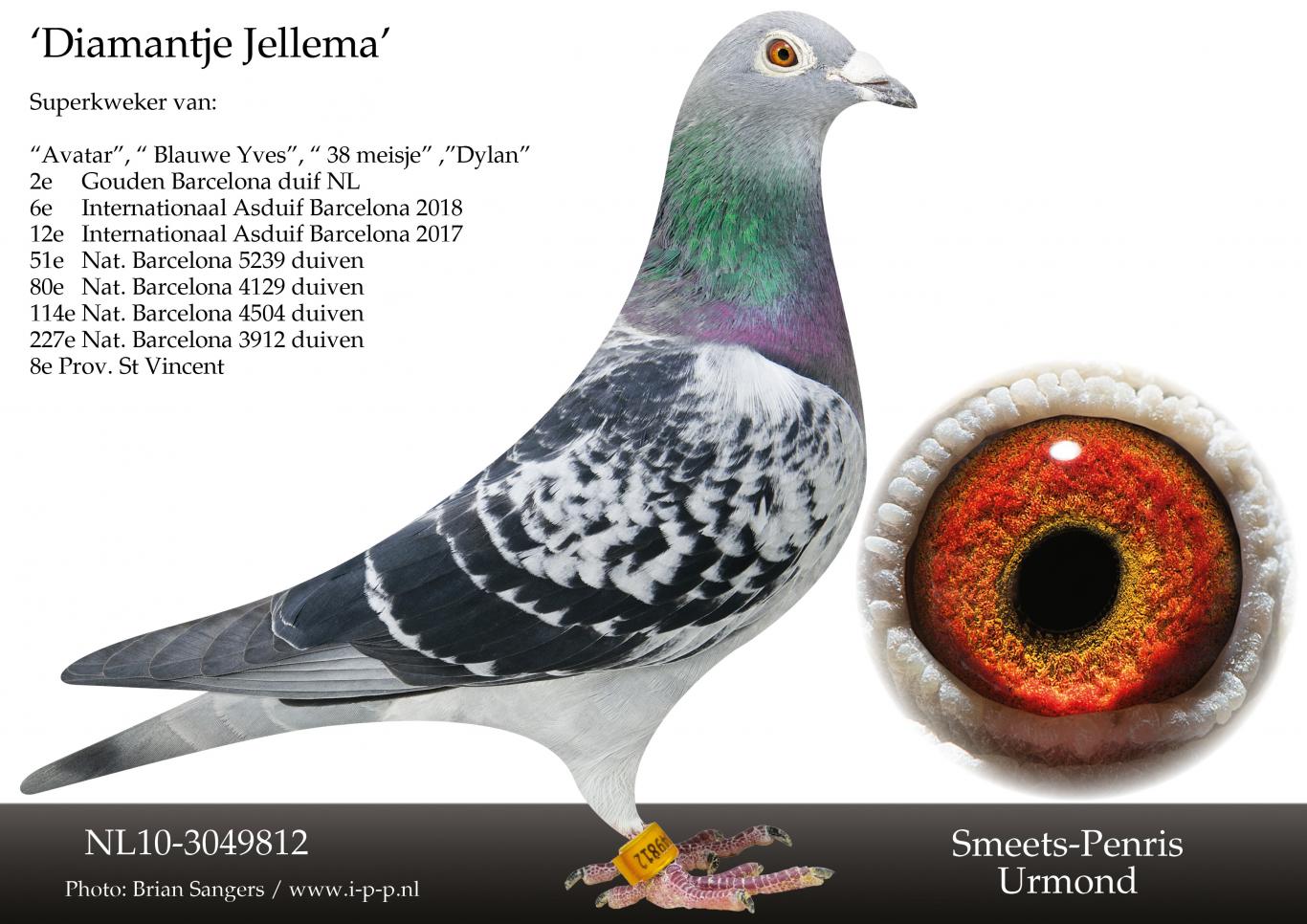 The racing pigeons get Paloma breeding / moulting now until the races start, than we switch onto Purification and Gerry Plus at the beginning of the week and use Duo Sport Paloma at the end of the week with some additional candy and peanuts.

The widow cocks always get their food separate in their box while the hens get food together until they are on a nest position.

At arrival there is are always electrolytes waiting and get 100% purge as food.

As extra's we like to believe in garden vegetables such as carrots, beetroot and also a lot of garlic is given.

For the medical story we especially pay attention in April, a short distance race with cold head wind can kill your entire racing season so we like to interfere here quicker as during the season. With interfering we mean given a cure for the respiratory so they are surely open and we don't have to give a long antibiotic cure.

A new colony we got acquainted with, Piet & Robin a big congratulation from the entire Herbots team.