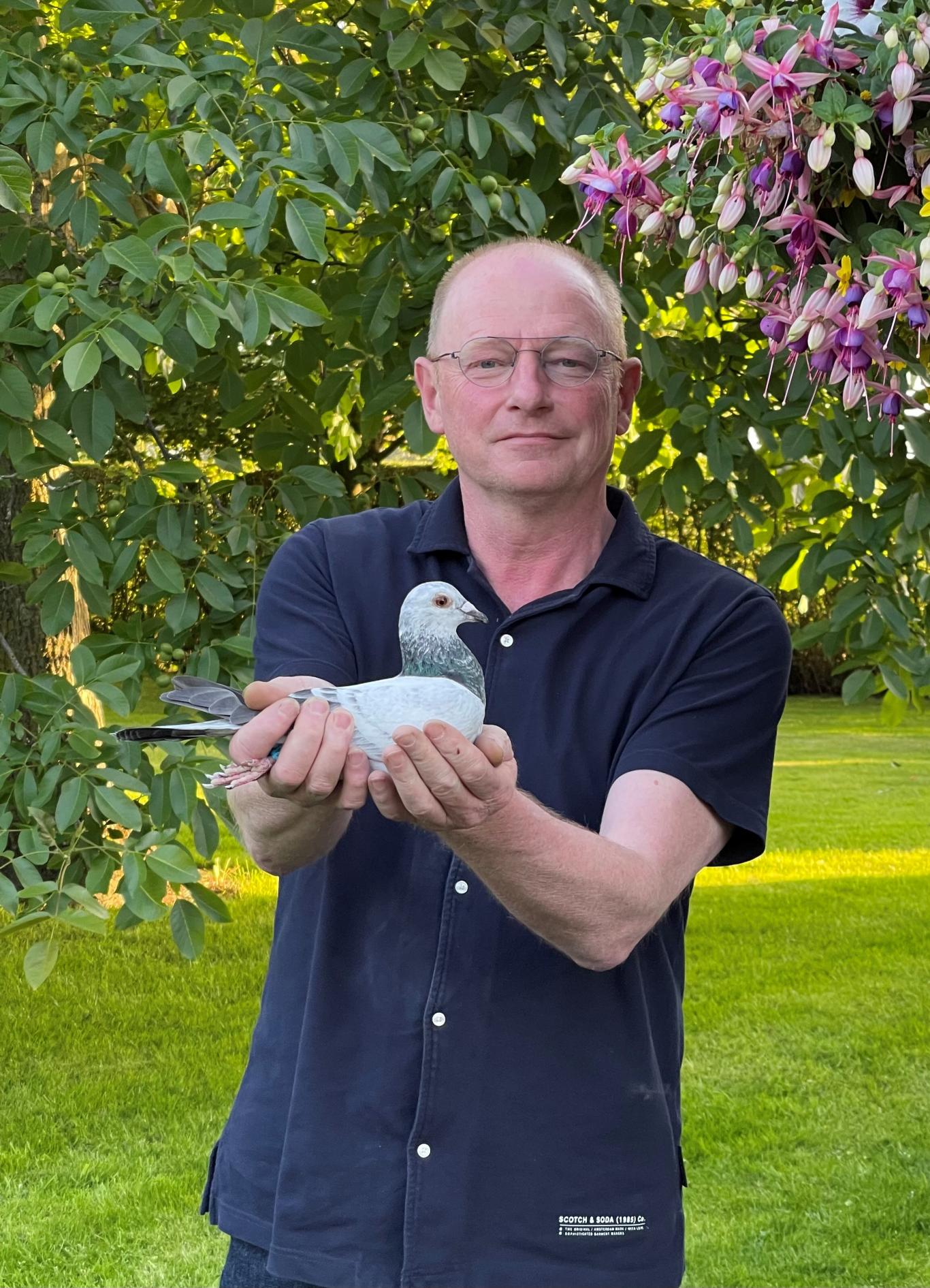 5 months ago, on 5 January 2022, Astère Vergotte from Aalter died at the age of 74. Rather unexpectedly. Astère was and still is known within the pigeon world as a real top pigeoneer. A bit of a master wizard who could get a bit more out of a pigeon than the average player.  He was also the forerunner and specialist in playing middle-distance and heavy middle-distance with the hens. The way he could motivate his ladies to top performances was unseen.
He was also supplier of pigeons with a strong inheritance power to many lofts. Also as a columnist Astère was a well read sports friend who taught many people some wisdom and tips for a good care and improvement of the approach.
It was in him to teach others things. As a teacher, he had spent almost his entire life teaching children skills and wisdom that would help them to be good at life.
Many reasons why Astère is still missed by many people and is engraved in the collective memory!

Life is full of coincidences and in life people cross your path. With some it is only a brief introduction, with others you go on the road together. And so it happened with Rik Cools and Astère Vergotte. Rik met Astère at the school in Aalter where Astère had already been working for a while. In addition to their task in education, they soon exchanged a word in the staff room about their common hobby, namely pigeons. Rik, who also had shown his talents more than enough, found in Astère the teacher for playing with the hens.
Many in that generation only knew how to play with widowers and nest with youngsters. Astère was always a pioneer in many areas and convinced Rik to also start playing with hens.
And whether this was a success! In a short period of time Rik became a leader on provincial and national level with very strong results.  With a colony of pigeons based on the best of Gaby Vandenabeele and some other top lofts from the region, he hit the nail on the head with his madams.  The cooperation that Rik set up with Chris Debacker since a few years has also led to a lot of good results.
Astère and Rik also improved each other in this approach.  Thus, Rik still speaks with great praise about the way it all went.

The little grey of Astère brings a beautiful salute of honour
As if it had to happen this way. During a sale of vouchers for the benefit of a company in the region, Rik bought a donation from Astère. At the beginning of 2021 he can choose a pigeon from Astère from the 1st round. Rik chooses a beautiful grey hen and let it be a super bird!  As a youngster Gray (BE21-4111433) already flew

The grey is a little speedster on the road, but on arrival at home, she wants to wait on the ridge of the roof before coming in. Usually she looses two minutes...at Chateauroux last weekend it was only one minute.......Pigeon sport is an experience and also a lot of emotion. With the still recent death of Astère, this little pigeon born in Aalter brings all the beautiful memories back to life. We are convinced that this salute will be very gratifying for everyone! Long live the little grey! 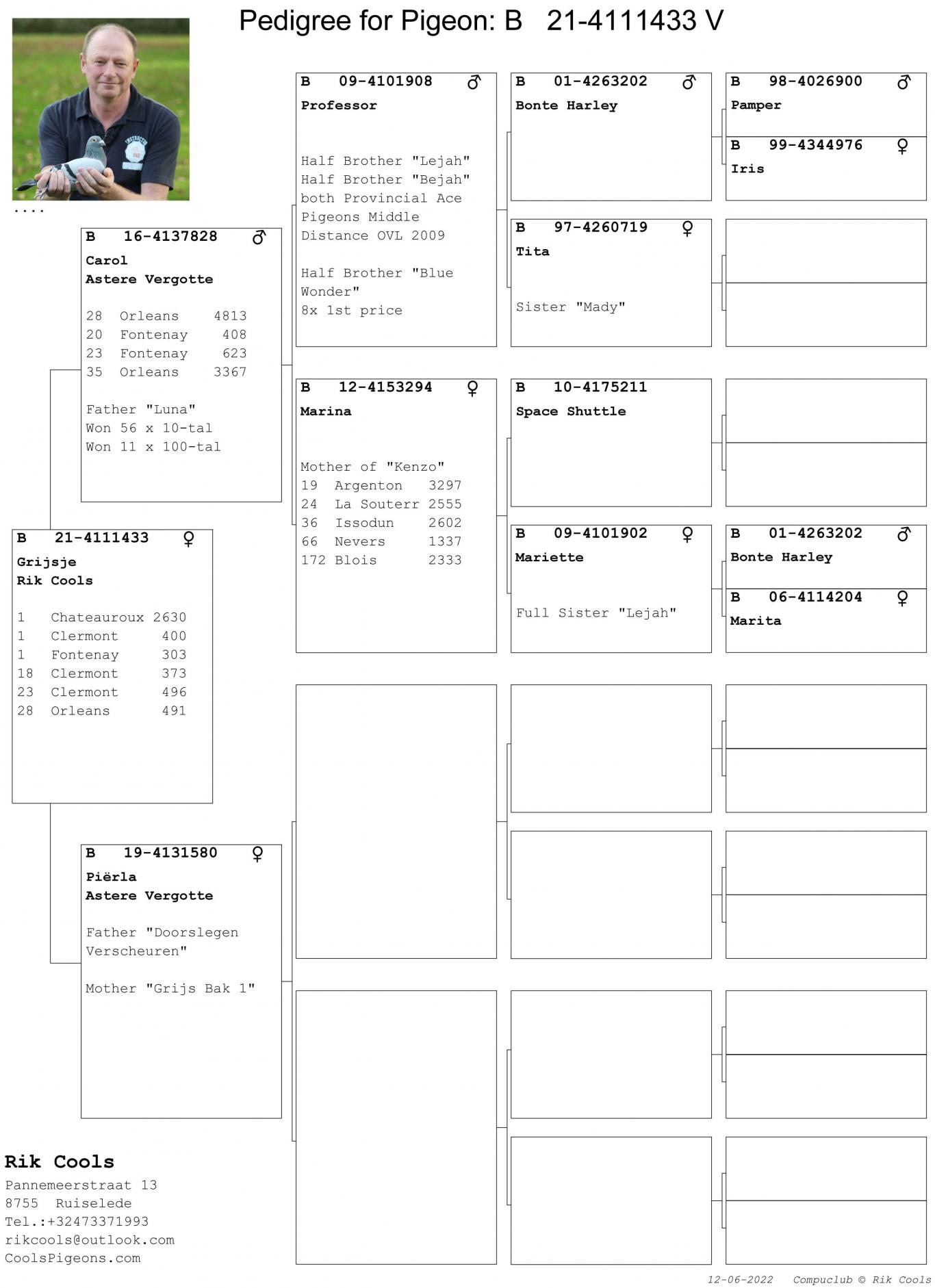 It was no coincidence that Rik's hens team hit nests at Chateauroux. These are the chosen distances for the pigeons of Rik, his focus is on the heavy middle-distance and the races before showed that something beautiful was brewing.
Rik started with 12 pigeons and won 1, 2 and 3 in the club from 1,402 pigeons.
The hens had not bred before the season. They flew two preparation flights from Clermont and were on widowhood. This means that during the day they always stay in an aviary (protected with windbreak netting) and at night they can stay in the loft. Before the season they were boxed.
They are played with a cock that stays at home. After racing they were coupled so they flew on Bourges nest. Now they were put back on widowhood with strong results as a result.
The week before Chateauroux, they played the 3 first prizes at Clermont. They train twice a day for 20 to 25 minutes and see their partner for 45 minutes before basketing.
They get a relative light food (Beyers Vandenabeele) and are fed with wax corn and Super Energy of Beyers.
The mothers of Rik put down a super result with Gray as the leader. Afterwards Felicienne and Gloria were still in the lead.

Felicienne flew 2nd local from 1,402 pigeons, 4th zonal from 3,795 pigeons and 5th provincial from 7,286 pigeons. She is a real top pigeon which confirmed several times already 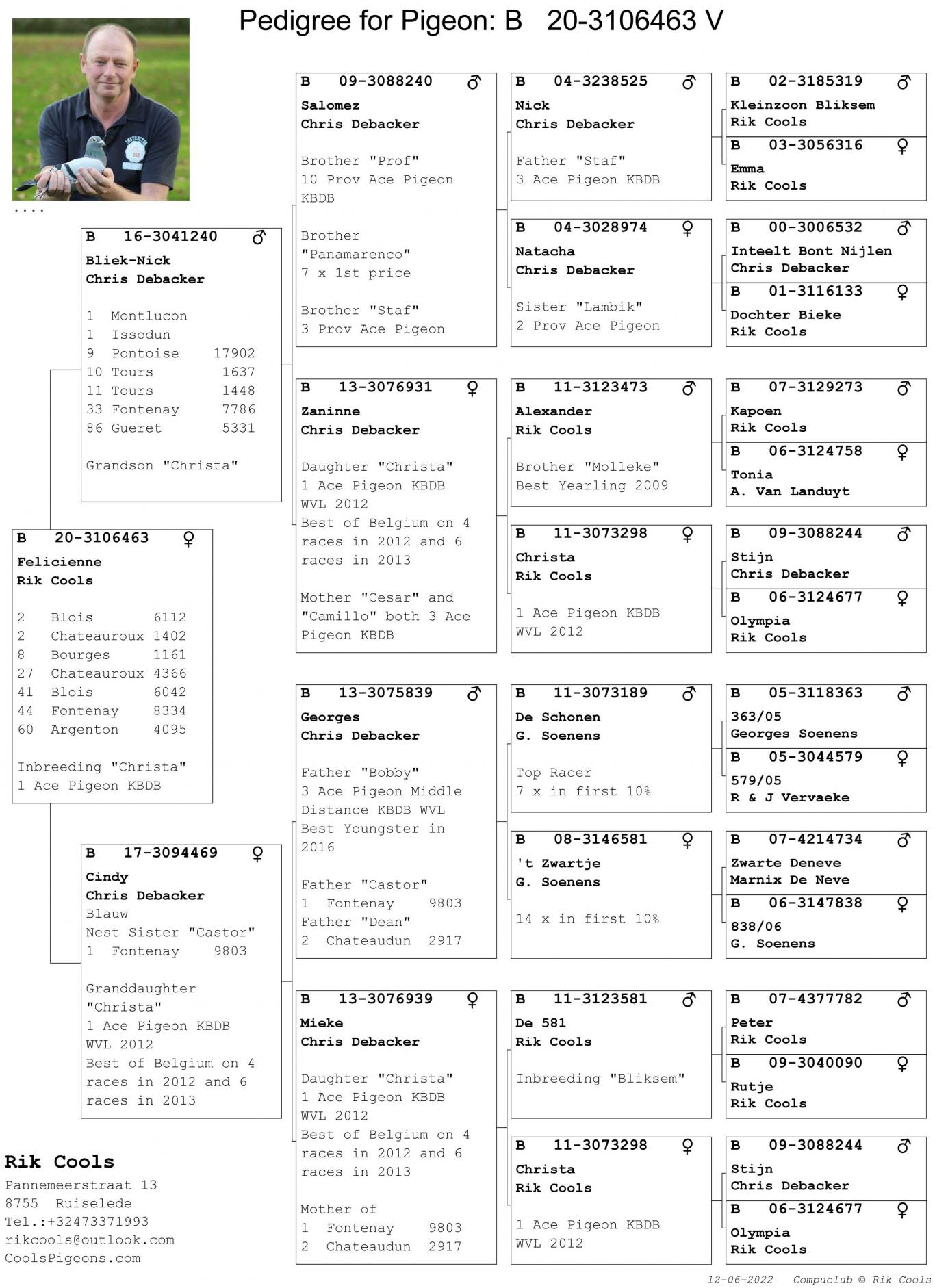 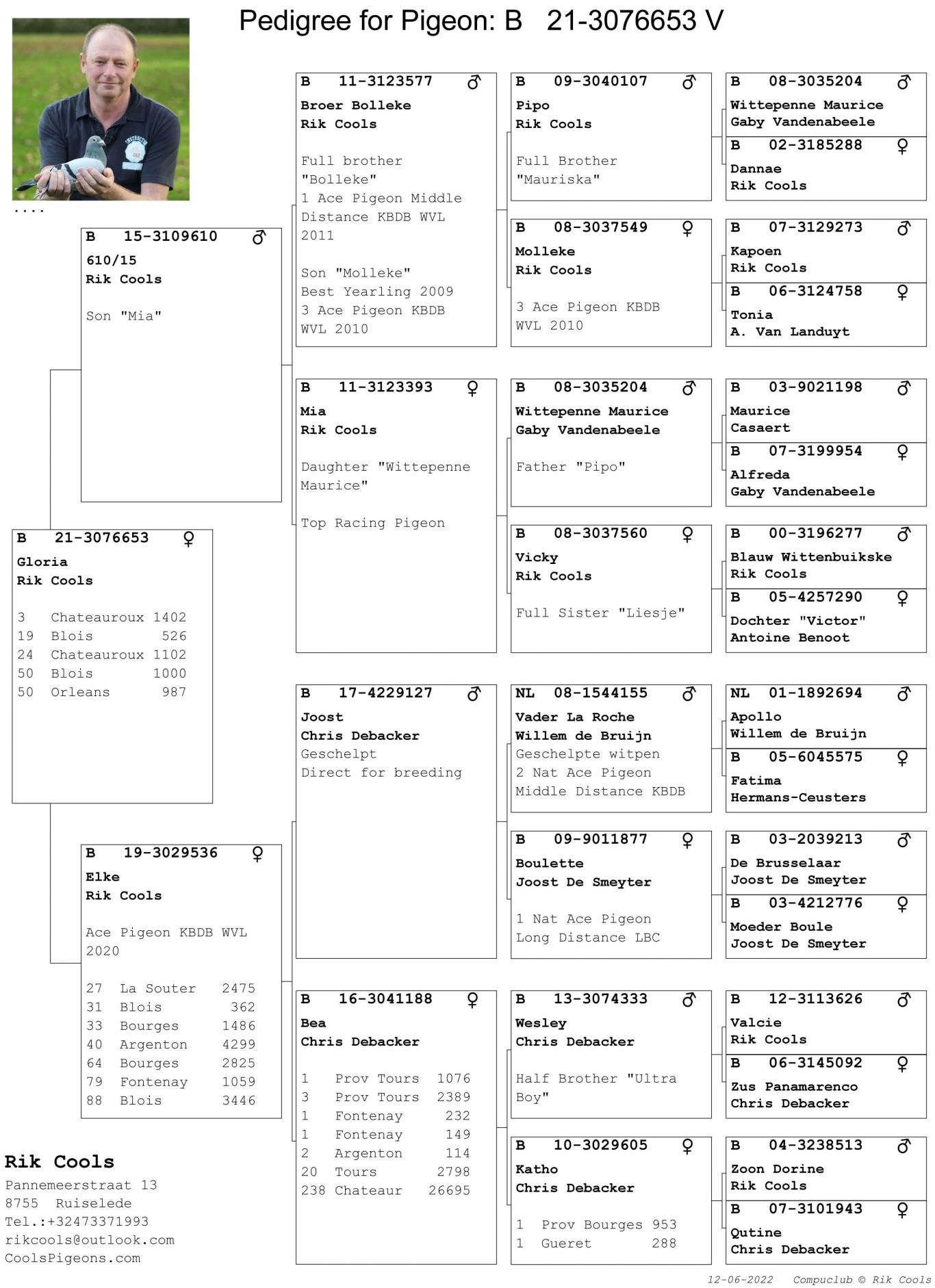 The total result of this team of 12 pigeons at Chateauroux is one to lick off your fingers and thumbs.

Every year Rik scares us with a great result and he is always in the lead.

The little grey also made sure that all this shines a nice light on a friendship that was sealed with a nice victory !