Denderwindeke: “They did it again”…indeed, after the stunt of last year when Philip and father Ludo won the 1st National Ace bird youngsters national races with ‘De Finman’, they now have a new vedette racing around the loft with “Miss Montoire”. “Miss Montoire” (B19-4013340) showed her class by winning this provincial race. Philip explains:’ we were waiting for the pigeons from Sermaises and we weren’t thinking at all about an arrival out of Montoire when ‘Miss Montoire’ direction loft raced. An unbelievable feeling…even my big toe felt that this was going to be an early one. I quickly looked at the computer and immediately our name was noted down with the highest speed.’ A spot that they didn’t gave away anymore as with 1241m/m “Miss Montoire” became the fastest of all 8,627 Montoire racers. And we have to say it as it is, the ‘Montoire racers’ from the De Maeseneer family showed them at their best. Proof is the result from their club “Eerlijk Duurt Langst” Viane
261 old: 1-4-4-6-19-21-26-61-62-67-85 (12 basketed)
540 yearlings: 9-9-30-35-101-107-124 (8 basketed)

Philip: “Whether she was motivated? Well, we strongly suspect she was as after Chateauroux she went off with another cock and we all know by now that a new love in the game can do miracles. “Miss Montoire” went as 1st signed in the basket and that was thanks to her former top results namely:

Normally she will be basketed again coming Thursday for national Argenton and a week later for National La Souterraine. 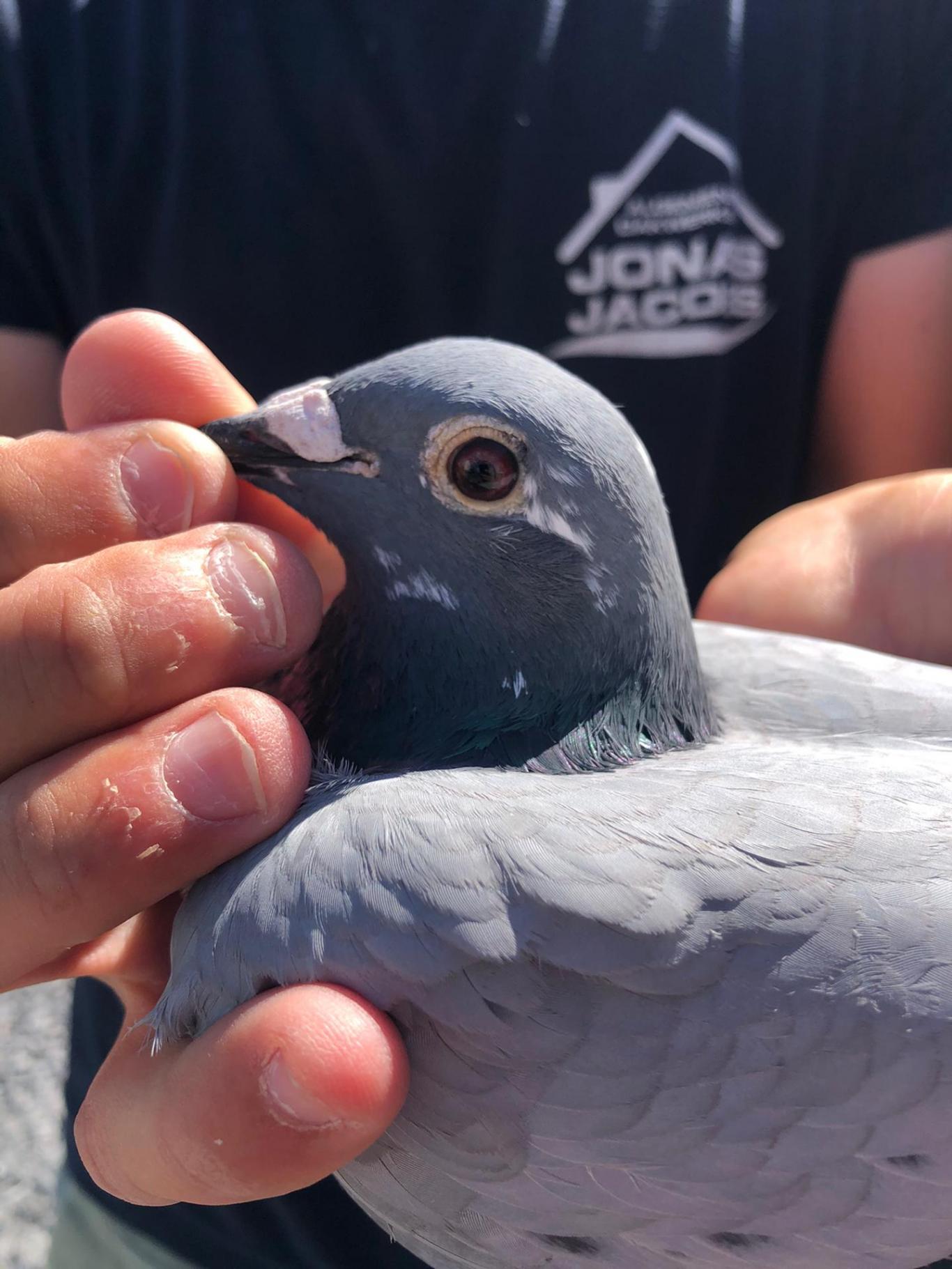 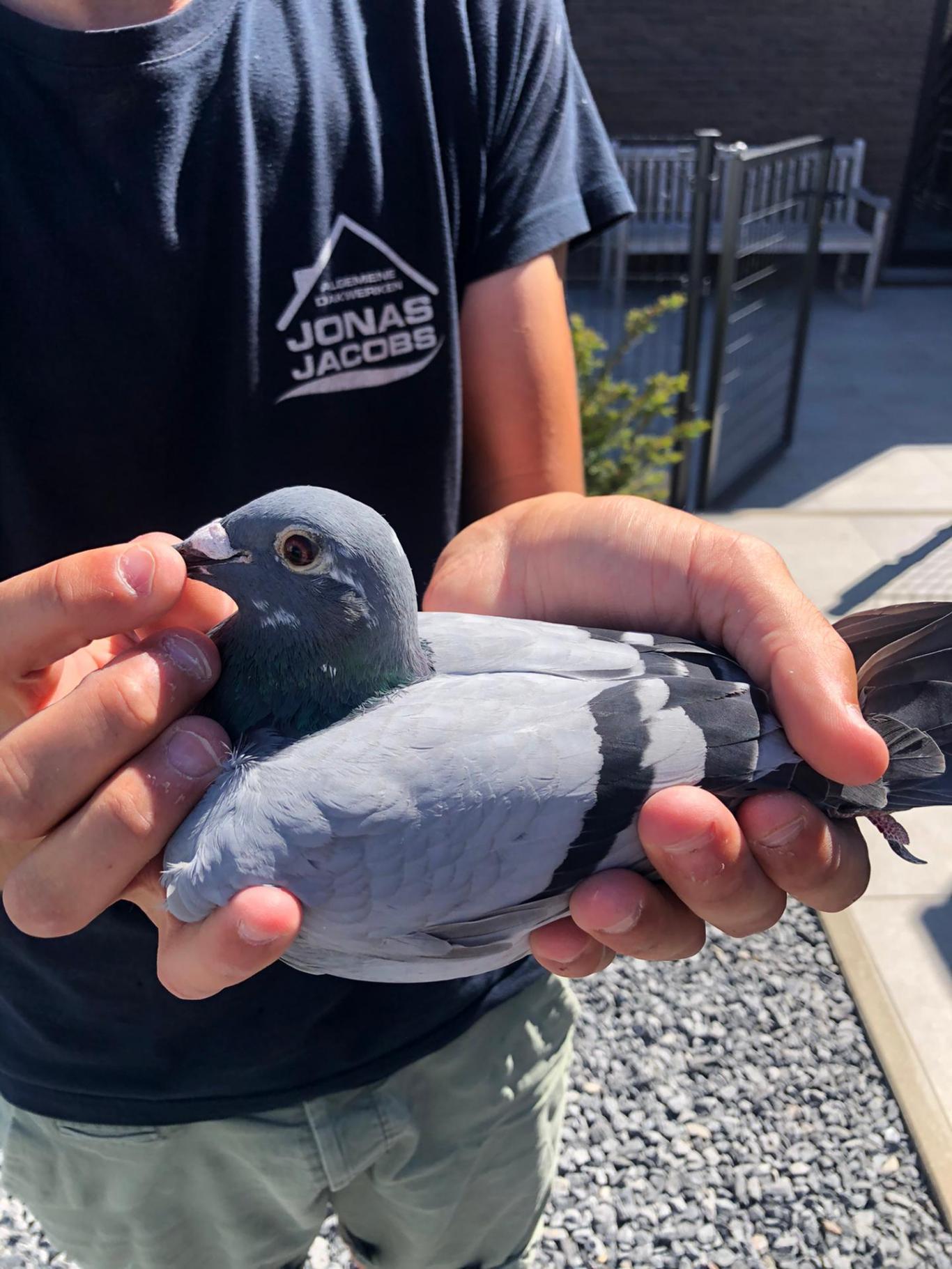 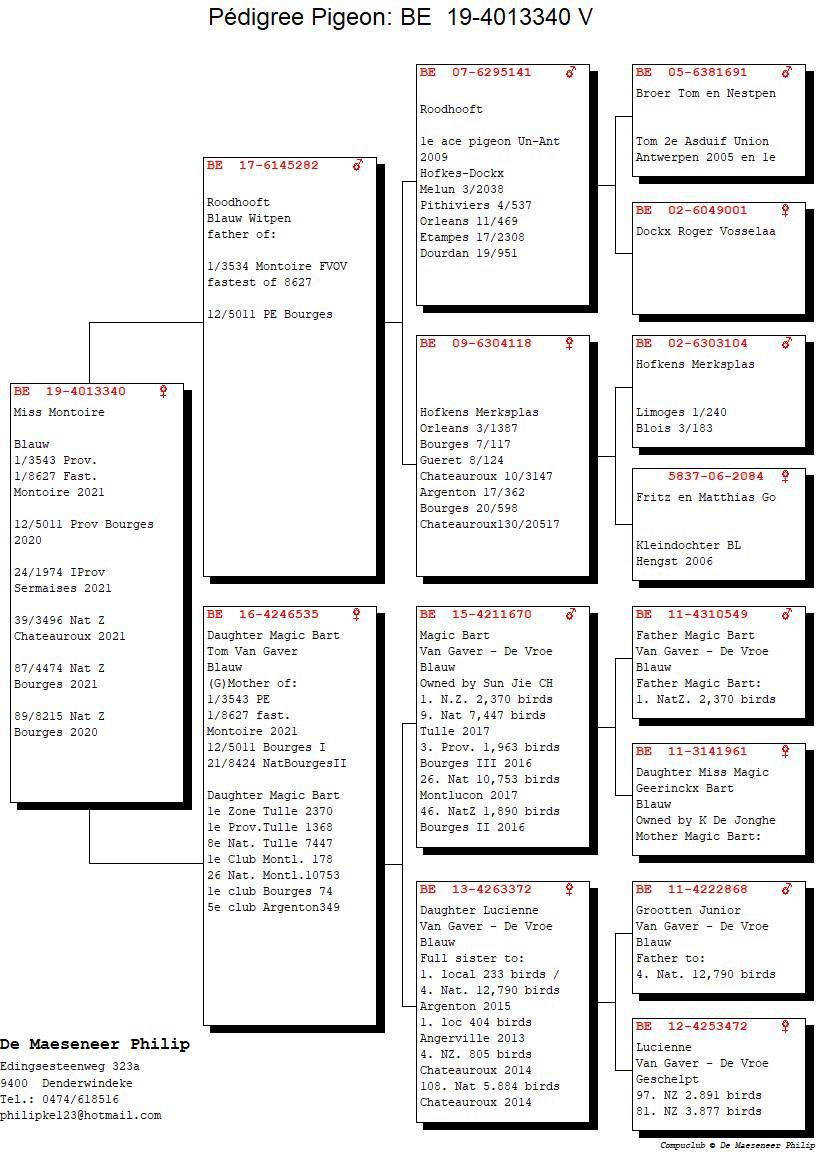 Philip: “I filled in my first loft list in 2009. And as every starting fancier I raced short distance (150km) and middle distance (300km). I did this with pigeons from Rene Sterckx. Seen that the amount of pigeons on these races went down we decided to focus more on the greater middle distance, read the nationals. It must have been 2011 that we contacted Gaby Vandenabeele and we could take 16 rings direction Dentergem. When we went to get them at Gaby they all got a box on the breeding loft and we can state now a few years later that this wasn’t a bad investment. The father of ‘De Finman’ is born out of 2 Vandenabeeles and in 2018 we won 2nd Provincial Argenton and the father to this winner was also from the Vandenabeele pigeons. Especially when crossing them in the Vandenabeele pigeons were more than successful. A third strain on our breeding loft are original Tom Van Gaver pigeons. A few years ago I sat by accident during the celebration of the national KBDB champions at the same table as Tom. We started talking and we hit it off immediately. I bought a voucher from Tom at a local championship day and this is how I went to this big champion in no time. In the meantime we became friends and I can state that half of my breeding loft exists out of Tom Van Gaver pigeons.
The last investments were done at Andre Roodhooft. Via Jef Schaumans (the former owner of the known restaurant “De Rare Vos” in Schepdaal) I came in contact with Andre and from one came the other and I could place 7 youngsters from his 4th round from his breeders in my basket.

Before the season of 2021 we have 24 widow cocks and 20 racing hens. These are being raced on pure widowhood so they have a home staying partner. All racers are being coupled, together with the 12 breeding couples, half of December and the eggs of the breeders are being replaced under the yearling birds so they can start quickly breeding a second round.
Once the youngsters are weened, the racers start a winter regime. This means that they are being fed very light and that they don’t have to come out anymore. Half of March the fire is being relite and can come out again. This system is for both the cocks as the hens.
The hens are being basketed on a weekly base for a 500km race while the widow cocks the 600-700 km races have to do. The menu says Galaxy mixtures from Beyers and the last 2 days they get as extra hemp seeds, pealed sunflower pits and peanuts.
In a matter of side products we add a lot of acids in the water and at the end of the week some extra vitamins and amino acids. Medically they got the necessary vaccines, is trichomoniases kept away by the use of yellow drops and that’s it. The warm weather gave a boost to the pigeons  and when all goes well you don’t have to use any medication, is what they say in Denderwindeke.

Philip and Ludo…congratulations and up for a next stunt !