The tandem Poussart-Santens out of the Walloon city Chimay did very well in 2019 on the middle distance races. Olivier Poussart runs this colony together with his son Justin and Paul Santens who takes care of the necessary breeding material and the administration. They did very well on the short distance races, great middle distance was also good but the middle distance races were in one word superb. For those who missed out on the 18th of May when Fay-au-Loges was flown (288km) with 2,638 competing pigeons. They won 1,2,3,4,5,6,8,9,11,12,… or on the 13th of July Bourges semi national against 3,885 old birds 1,2,3,4,5,7,8,14,20,27,28,29,32,… or Bourges II National beginning of August against 10,401 year birds 3,4,8,43,47,… It doesn’t matter whether it is 300km, 400km or National Bourges. These pigeons can take it all and placed the real icing on the cake on Chimay. They became 1st National Champion Middle distance 1+2 KBDB 2019 with the lowest coefficient ever and next to this also 3 National ace birds within the top 4 at the KBDB championships. You can say that there season was a success with 30 pure 1st prizes !!!

Both cocks as hens have to work over here

The racing team 2019 existed out of 36 widow cocks and 24 hens ( in 2020 it’ll be 30 hens as the best once over here are mostly the hens). They are all being raced on the classic widowhood system with home staying partners. During the Winter period the widow cocks are being coupled together with the breeders as they have to breed out their eggs and raise the youngsters. The ladies get rest until March as everything will be coupled again to breed during 4 days and then the real game can start off.

Do you like early trainings during Spring or not?

We prefer to let the pigeons out 1 to twice a week in February, not full speed but to sharper the base condition a bit. When March approaches they come out each day and then there is one full month to be able to get them at full speed at the start of the season. As Olivier goes out working during day time, the pigeons can only train in the evening. But they train hard, one to one and a half hour isn’t an exception.

Do the pigeon have to race each week or do they get some rest once in a while ?

The hens don’t get any rest, a shorter race in between is possible but this doesn’t happen often. The cocks have a rule that they get a week off after a bad race.

How are the hens housed during the week and what kind of motivation do you use?

During the week the hens are being locked up in a cupboard and get food and drinks. Once they have to race they don’t get this last thing anymore but remain locked up to keep a firm hand on them so they won’t start pairing up amongst each other.

The hens are being darkened from the 1st of March until maximum the 15th of May. The goal is that the most race until Bourges II beginning of August. Some of them do race Argenton afterwards but still on widowhood.

In a matter of motivation we have a fixed rule, we give all pigeons their partner and after about 5 to 10 minutes we start to take away the first pigeons. The last once can stay together for about 15 to 20 minutes but we don’t see an influence of that on the results.

In April when they get home from a race, they can stay together for maximum 4 hours. From the moment they go to the middle distance races they stay together until the evening and after a bad race we like to give them a bit of confidence and let them stay together during the entire night. 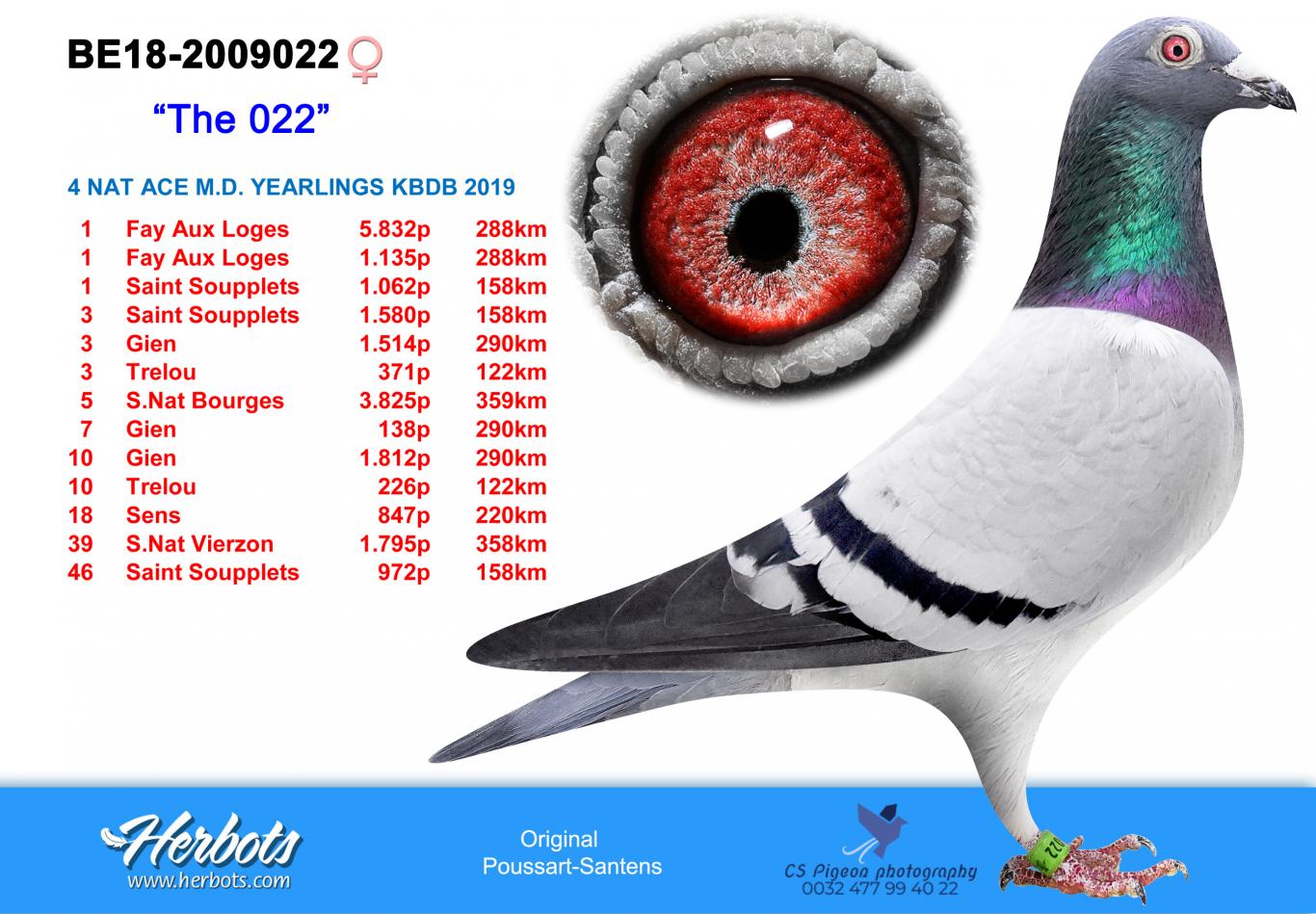 On a yearly base about 80 to 90 youngsters are being raced. This group exists out of a 1st and 2nd round that make 8 to 10 races until 300km and afterwards mostly 1 national race ( this year it was the last Chateauroux race) to get some experience. The 3rd round only races a few races until Melun (220km). They are being darkened from March until mid of June and enlightend from the 2nd week of July until the end of the season.

After the season a selection is being made based on results, second on brothers and sisters from the best pigeons that are being kept and if there might be something else on the loft with a very good pedigree of a proven pigeon, this one will get a chance to proof itself the next season.

We have full confidence in the Beyers Galaxy mixtures. During the season it is Light, Sport, Energy and Moult. We only add the last 2 to 3 days before a race a large portion of candy and peanuts. We like to work on a fast recuperation after the race and use here for especially the products of Schroeder Tollisan with Tolyamin Forte, Immunol and Quick. Towards basketing we don’t like to add anything on the food as we prefer they have enough food to go with.

In a medical way we visit Vincent Schroeder once a year and cure every fortnight with Tricho Green and every month we give them individually something against coccidiosis. We try to give as less as possible anything against airway diseases, only when the results lack.

Also in a matter of vaccination we don’t leave anything to the coincidence and we give in Autumn a cure + vaccination against paratyphoid and in Spring against paramyxo, herpes and small pocks to all the racing pigeons.

Olivier, Justin and Paul, a big congratulation on these marvellous results from the entire HERBOTS TEAM.