Jo & Florian Hendriks …confirmation of class thanks to an unique breeding base!

What the father-son tandem out of Nijswiller (near Maastricht in the Dutch province Limburg) is able to achieve every year again is just superb. Not one season or two seasons…no…you just can’t get these super motivated fanciers out of the top of the NPO and provincial races and this several different seasons after each other. The competitors know this really well. Against the classful Hendriks pigeons it is a hard battle each week again. Striking is that the condition of the pigeons stays present until the very last race of the season….even more…on the last race they are able to hit very hard as well.

Narbonne…the outlier of the season 2017

In 2017 it was on the International race out of Narbonne, they won on this race over a distance of 881km against 8,480 year birds with only 5 pigeons in the race: 4, 26, 27, - they clocked these 3 year birds at 18h28 – 18h54 – 18h55 – Phenomenal! Those who can set this kind of results on the last race of the season has pigeons with an iron strong perseverance and guys that haven’t given in on their power even after a heavy season.

Also in 2018 they were super strong on the closing race out La Souterraine, a provincial race. This race was being released by exception on Friday under very though circumstances (tropical temperatures). La Souterraine is for Nijswiller a distance of 605km. Only 2 pigeons came in over the 1,000 meter – so super hard – both were from the father-son tandem. Their first pigeon was clocked at 17h14min22sec, their second at 17h14min26sec – their third at 17h24min40sec, a top result against 1,094 pigeons – with spot 1, 2 ,3, they had 13 pigeons in the race.
Their first two had an advantage of no less than 10 minutes over a loft mate !

Let us start with the weekend of the 6th of July. On the flight program was Argenton…exactly 571km from Wijswiller. At the start you could find 9,512 pigeons from 1,113 fanciers where off 16 had a ringnumber from Jo & Florian Hendriks. The release itself was postponed a bit due to a interference of rainy clouds. At 9 o’clock they were released. A calm wind blew out of Western direction. When the result came out of the printer, they only talked about one thing and that was the world result Jo & Florian Hendriks. Against 9,512 pigeons they won : 1-2-3-4-5-23-48-51-113-152-250-279 (12/16). Such results say more than a thousand words…a proof of pure class !
The arrival of the Argenton racers is a moment that Jo and Florian will never forget. At 16h02 they clocked with a difference of 2 seconds two pigeons. In fact there were 3 at the same time but the chip from the first cock didn’t clock which made that top widow cock  “Bully Harry” (NL18-5112260) could take the winning palm. “Bully Harry” isn’t a one day fly and can show underneath palmaris 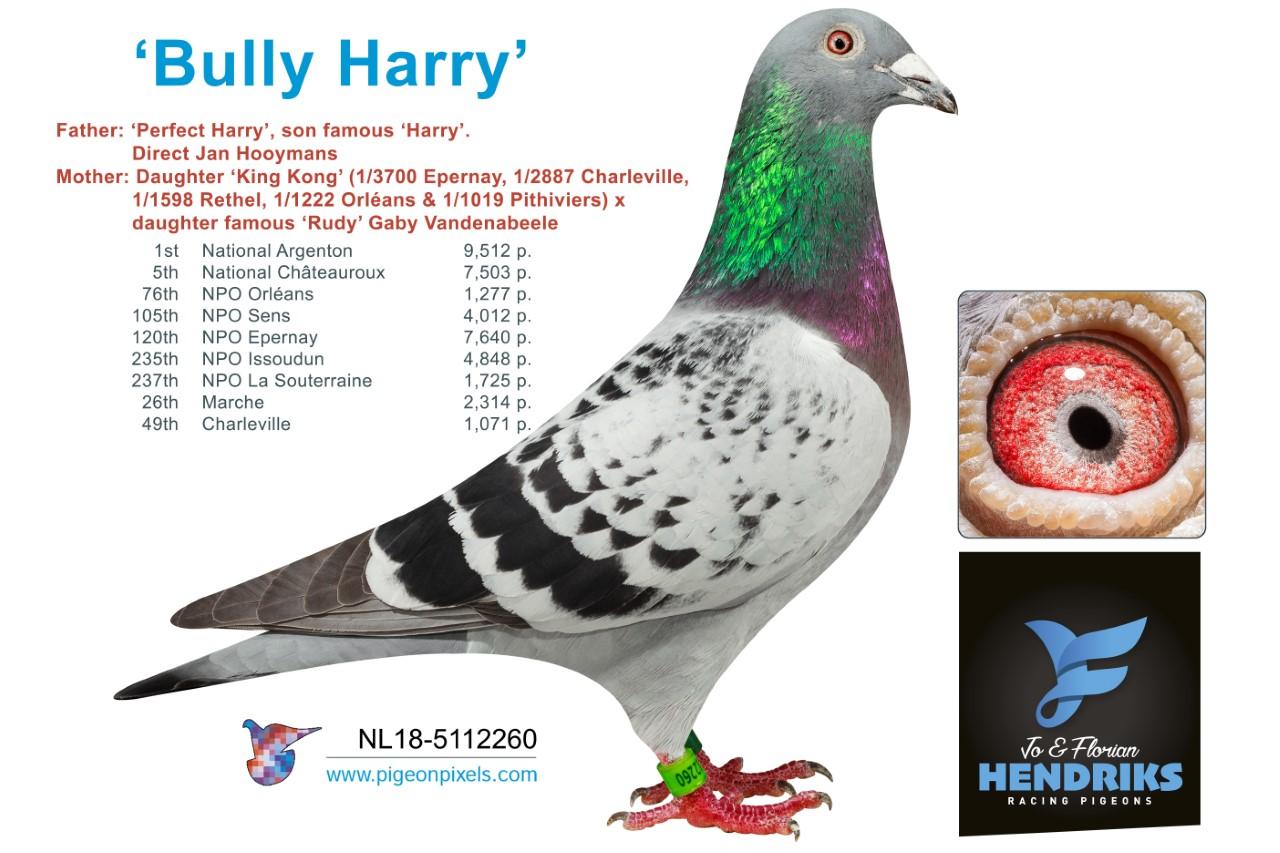 The 2nd pigeon that was clocked was “National Harry” (NL17-1545145) but we will take about this widow cock further on in this article.
Let us be honest…the result from Argenton is one to frame and to hang at the best spot in the living room against the wall. 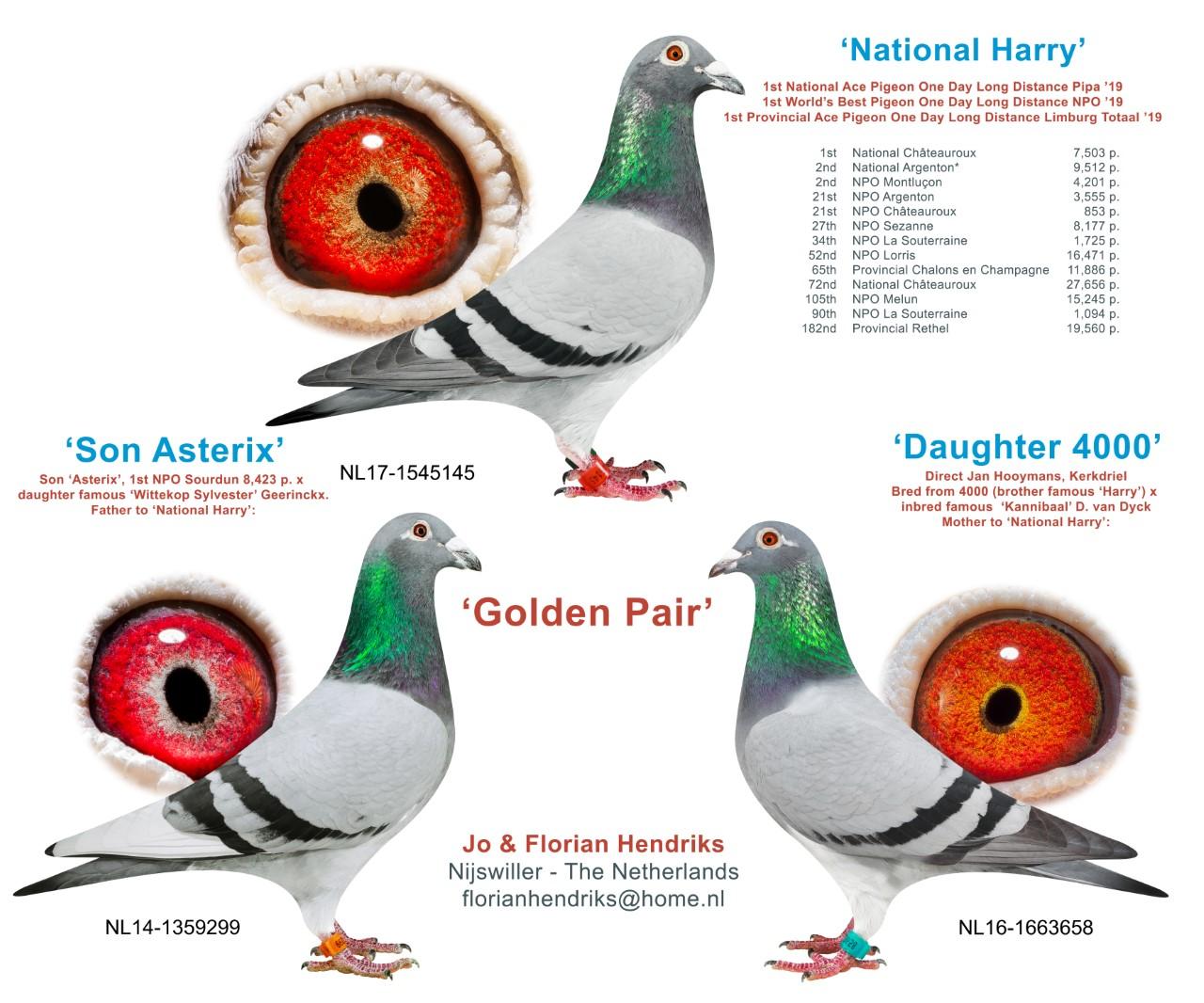 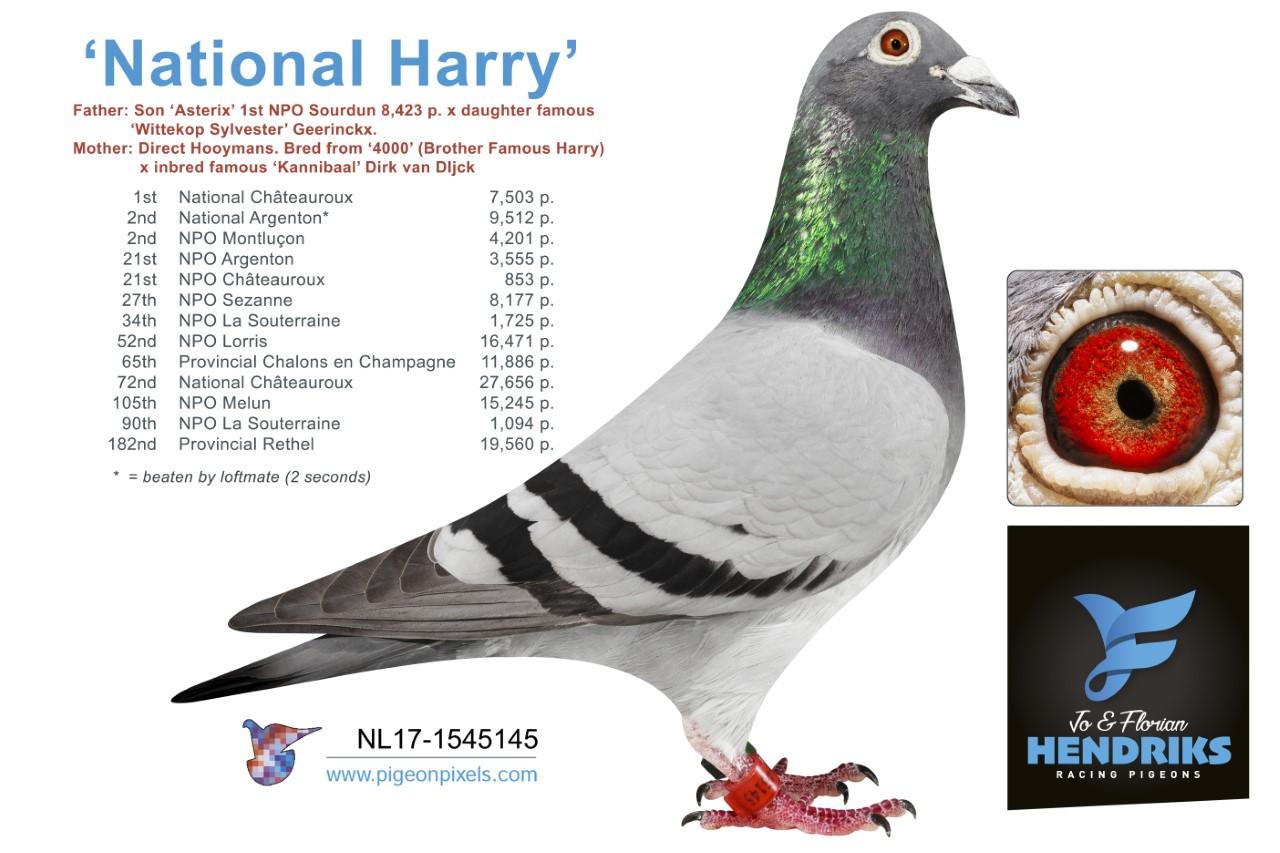 Vierzon National was the confirmation of the top class… 3rd, 8th and 9th against 26,141b.
The best result in Holland

The season of 2020
Florian tells: “2020 was a special year for us. We were planning to get to the start with 21 widow cocks. After our super year in 2019 our best 3 widow cocks moved to the breeding loft. Despite this transfer there was a lot of interesse out of China for our 21 other widow cocks. As the season could start on time we took the high offer out of China. That’s why we only raced youngsters in 2020 “ 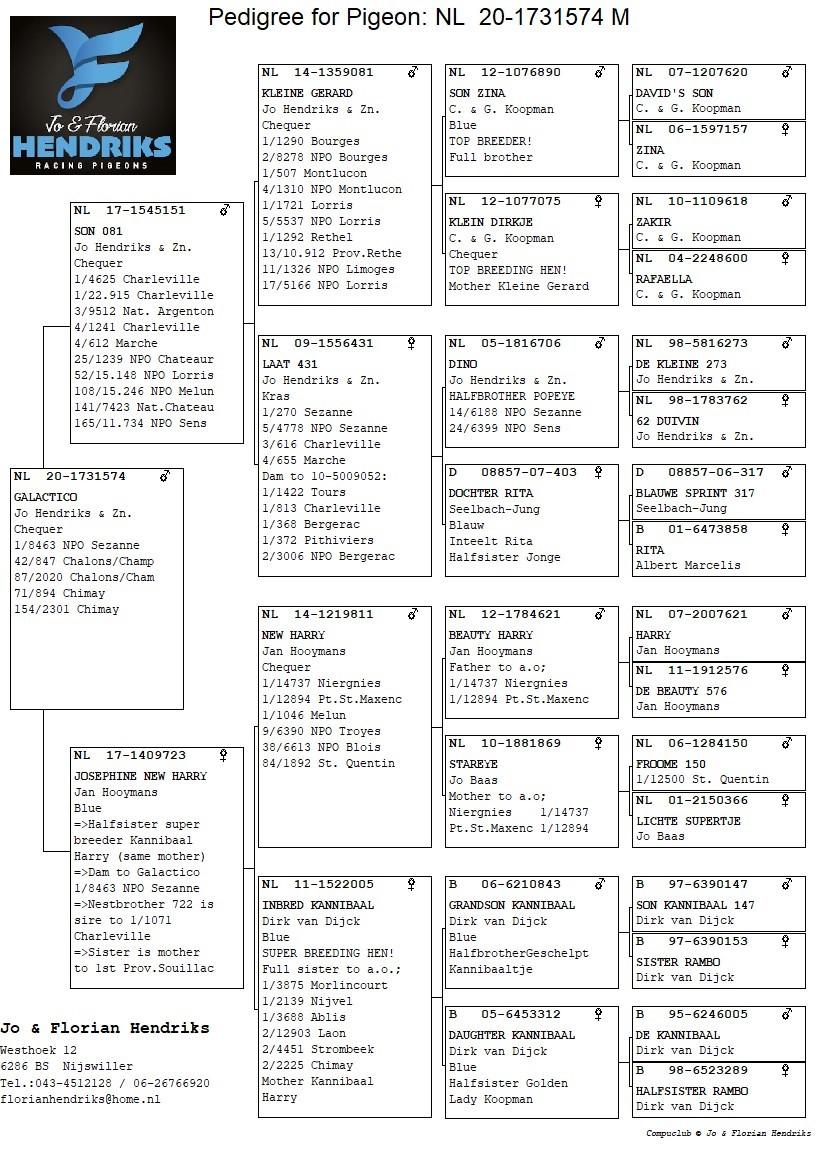 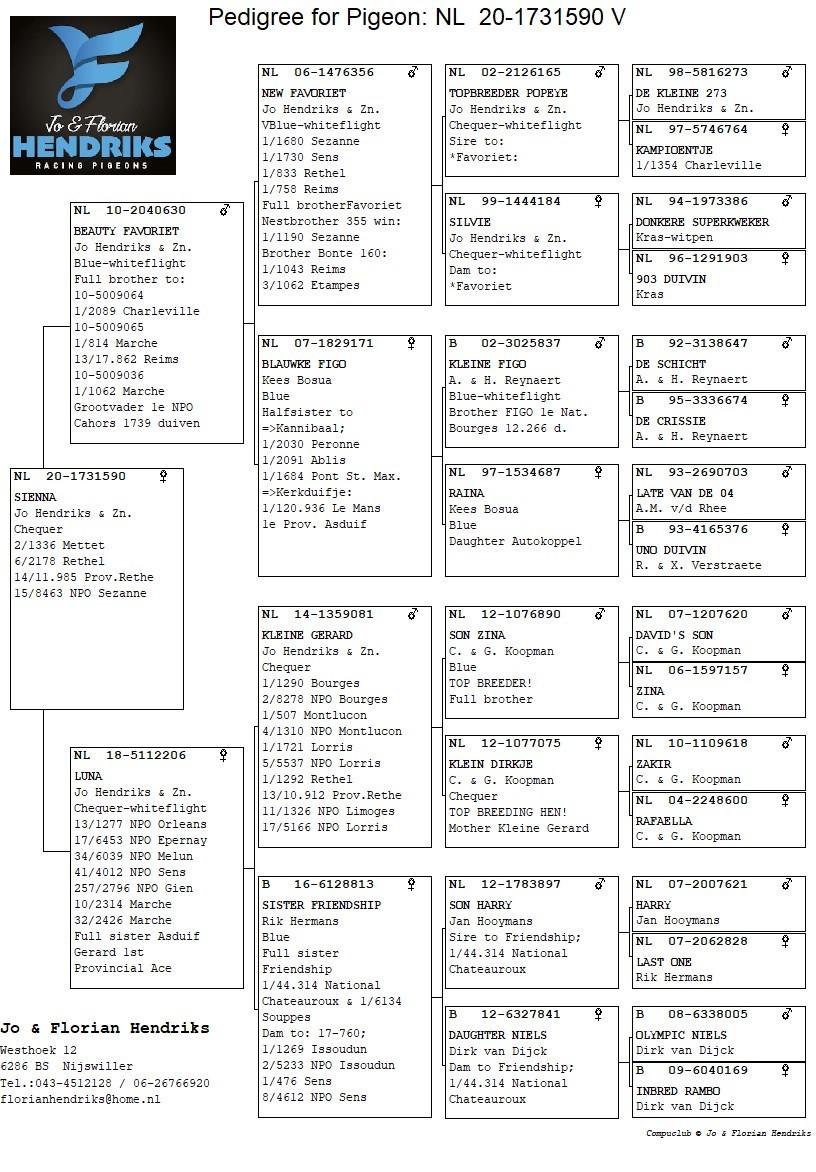 A golden breeding loft with “Harry” and “Kleine Harry” as base
At the beginning Jo had pigeons from ao Janssen via Wout Sleulders (Neunen) and this out of all his top pigeons such as “Het Kanon”, “De Generaal” and “Olympiade 08”. Via uncle Thijs Vluggen (Gulpen) the “Kleine 273” came on the lofts and the after breed of this top pigeon was unique. His son “Popeye” was a super breeder and off spring are still to be found in the current pigeons.
In 2008 Jo and Florian took the decision to align the game of the old birds entirely to the one day long distance races and therefor they did directed purchases at known champions such as Gaby Vandenabeele, Jan Hooymans, Gerard Koopman and Verkerk Gerard and Bas (daughter out of “Eye Catcher”).
The breeding loft of our champions is a wealth on top quality as at the moment no less than 10 direct children form the world famous “Harry” (NL07-2007621 - 7 sons and 3 daughters) and about 10 original Gerard Koopman pigeons (especially out of the “Zina” strain) on the breeding loft. Our champions are also very successful with direct children out “King Kong” (NL09-1499901 – 5 x 1st prize), a full sister “Friendship” (Jan & Rik Hermans) and the explosive breeding line from “Kleine Gerard”. We like to elucidate this last one a bit extra once again 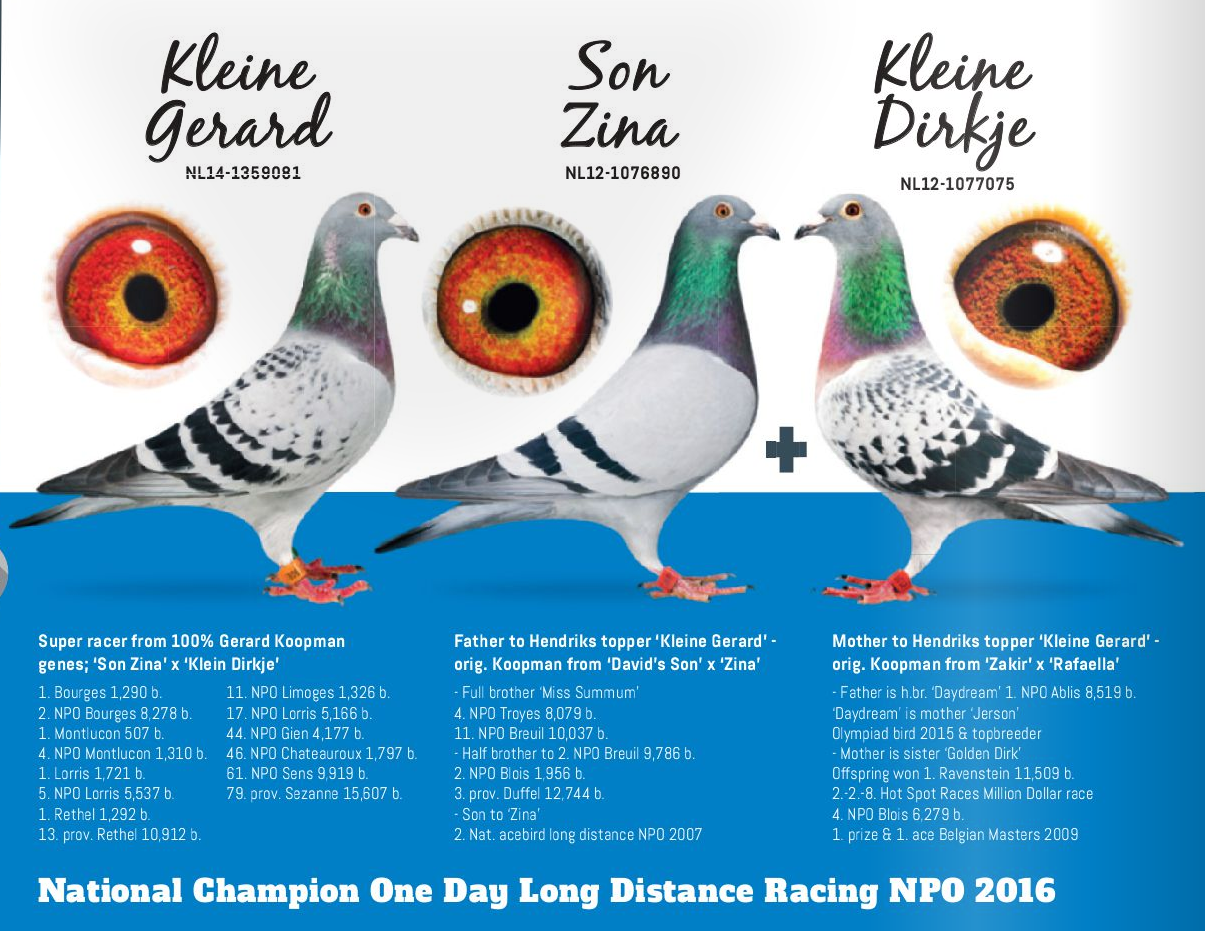 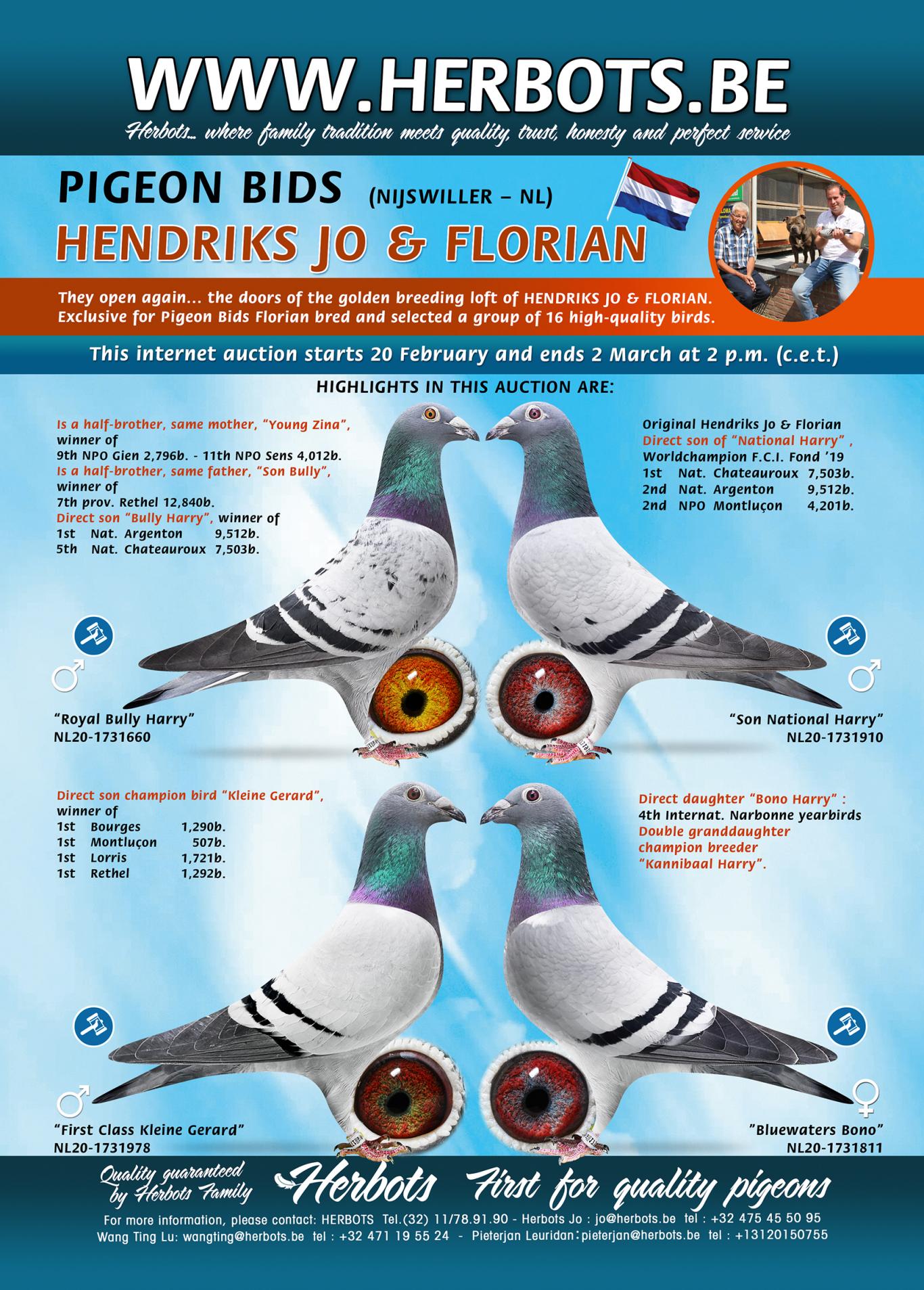 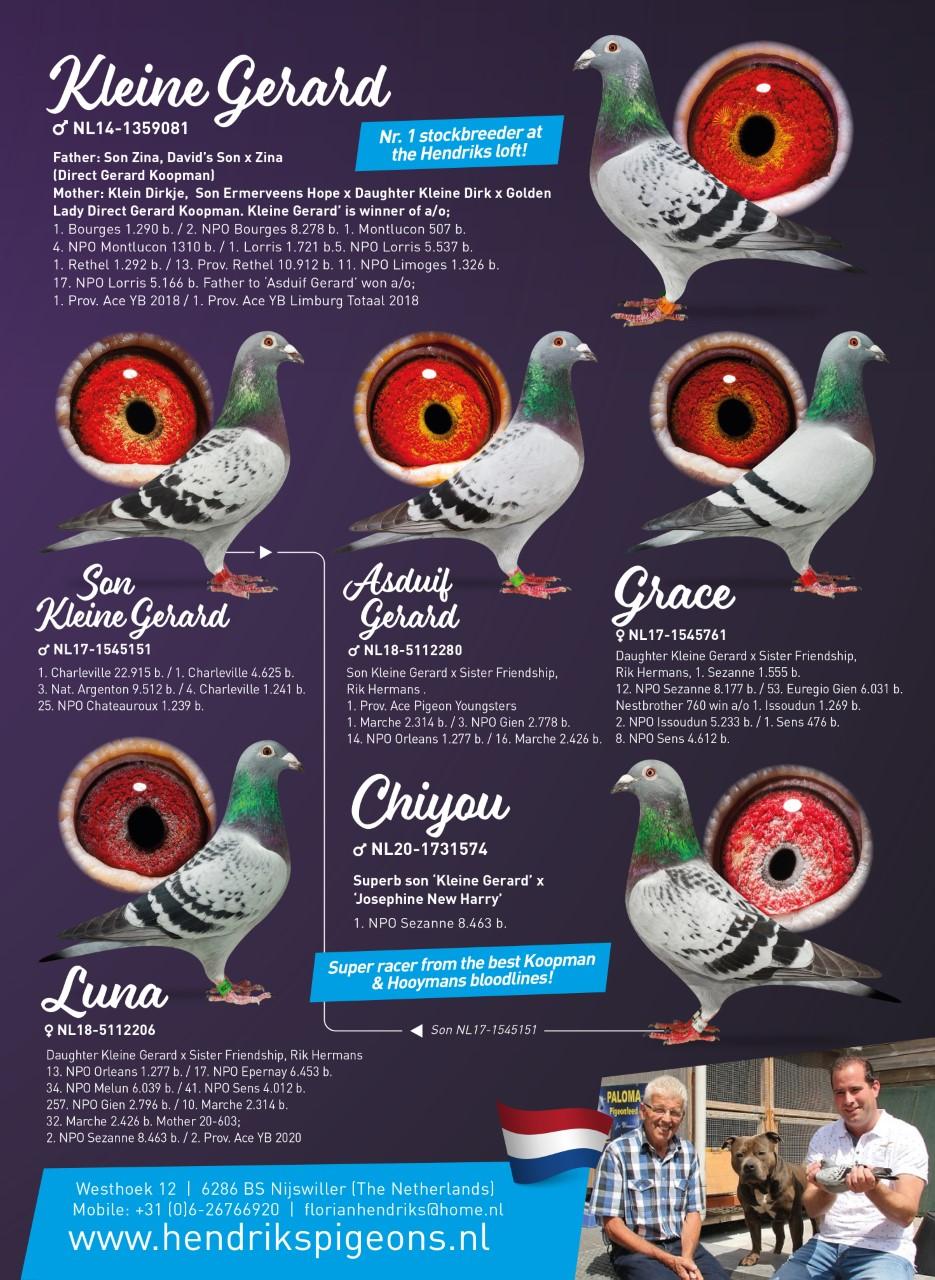 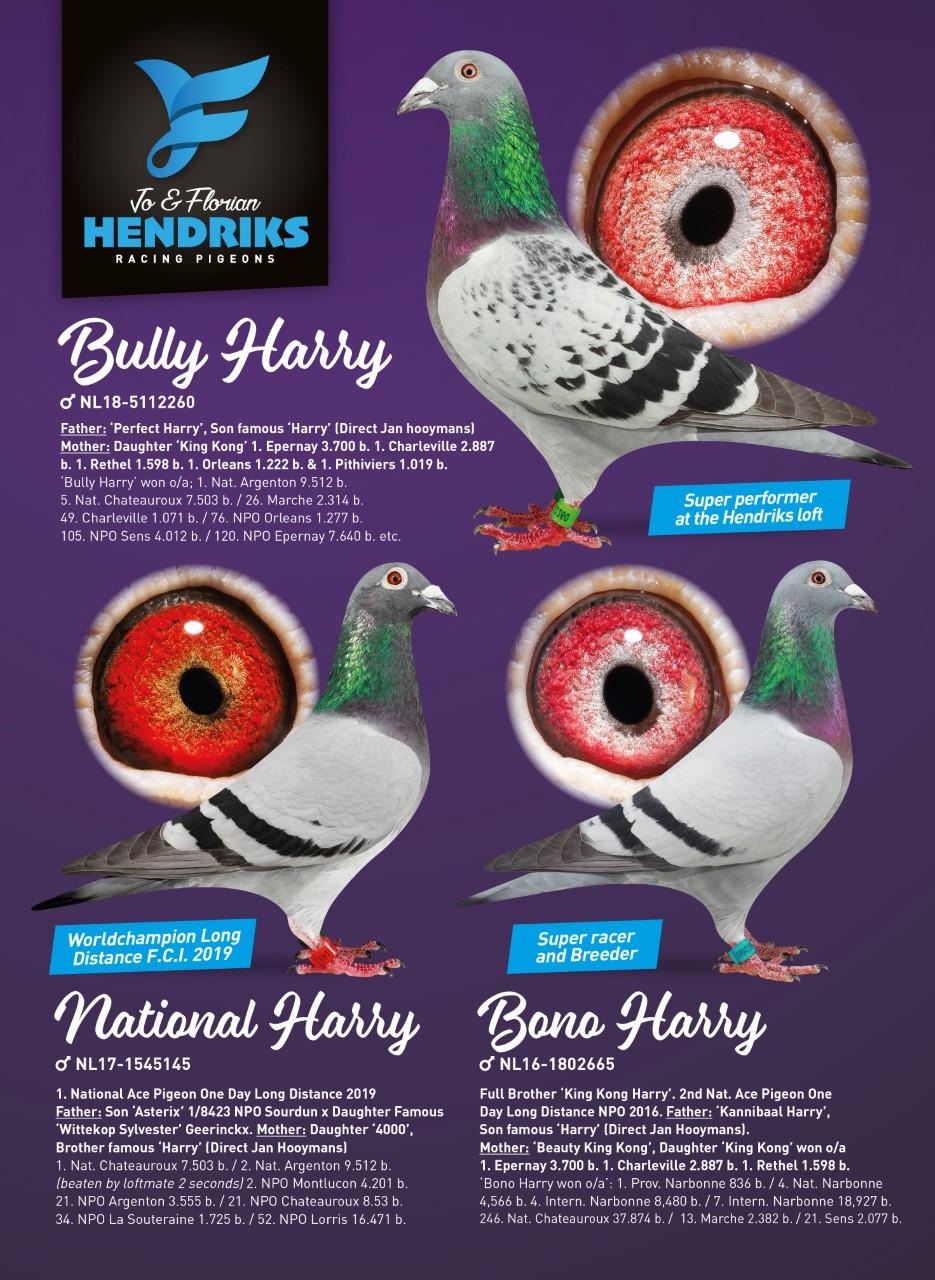