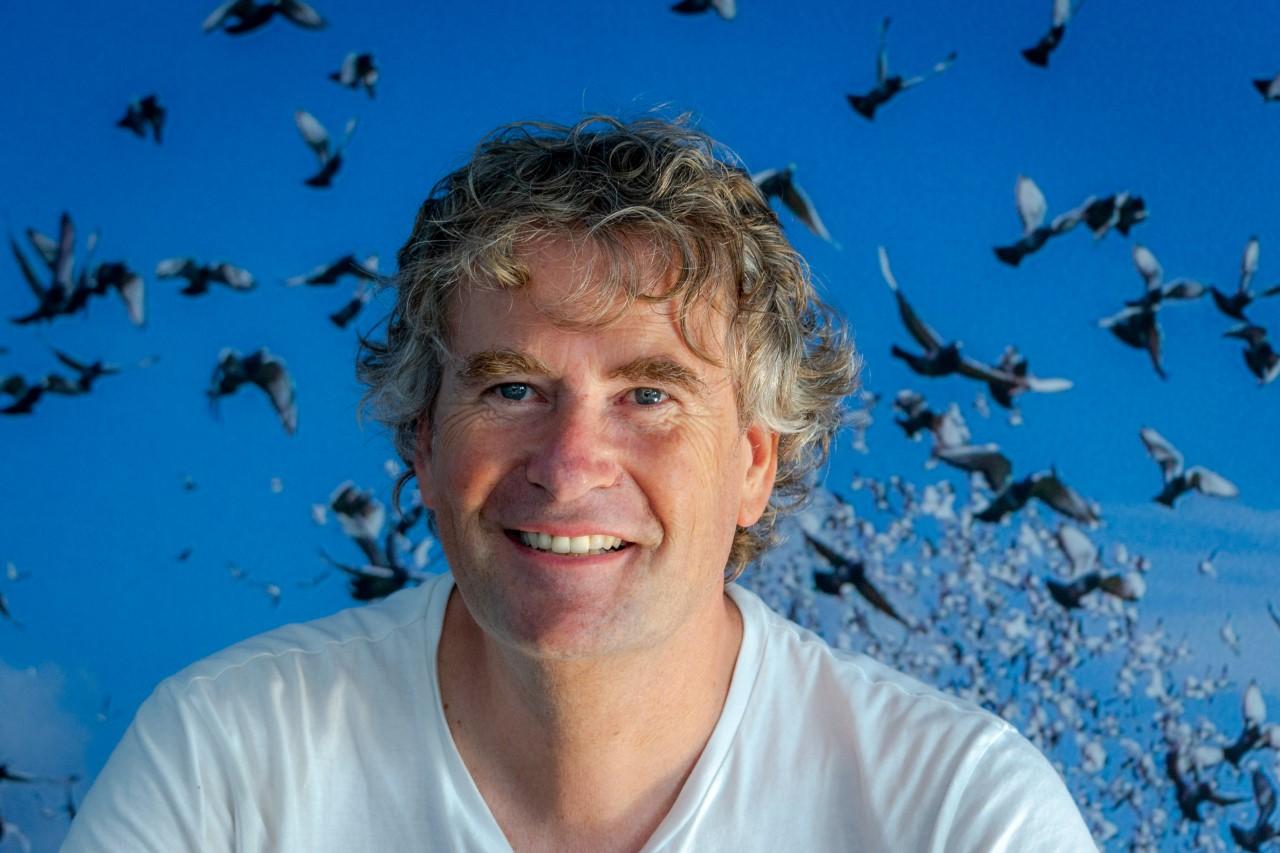 Within 6 years of time Ronald Geerdink races with the best of the best on the international extreme long distance. In 2018 Ronald won the 1st place of the National Marathon championship from ZLU, the most prestigious extreme long distance title of Holland. This isn’t a coincidence anymore but caused by a few different things.
First of all Geerdink invested at the best long distance racers from Western-Europe.
See the former mentioned investments. Another reason for the always getting better results is the strong selection of the pigeons. The nest game gives a good view on both the cocks and hens. This way you can select on both sides and this only makes your lofts stronger. Pigeons who race once on Agen and are being basketed twice as yearling on the extreme long distance need to have two prizes over these 2 years or once a head prize. This selection takes care of always better results both on the own loft as with others.

Time is valuable
Ronald Geerdink is the owner and executive director of Advaita-Advice, a company who helps high-net-wort entrepreneurs get the best out of their contacts with the bank in a matter of asset management. For the customer are looked for top investments and are costs being reduced. Especially due to this busy and time consuming job the pigeons have to get to get use to this. ‘Another fancier who is at home and can give care on a regular base is always a step ahead of me, but it just isn’t another way. These fanciers can get more out of their pigeons which they bought at my place and many fancier have amazing results due to this with my pigeons,” according Ronald Geerdink. In the past few years 17 1st prizes were won on NPO, national or international level with pigeons from Ronald Geerdink, this can’t be a coincidence any more !

2021 Villain Aureliain wins from Chateauroux the 1st prize against 2,409p. Both parents were bought by Villain in 2018 at Ronald Geerdink.

2021 Rinus van Rijen Lepelstraat had once again an amazing marathon season with his Ronald Geerdink pigeons. OF the 5 raced extreme long distance races from the NPO Rinus won in the SouthWestcorner Union Long Distance 2-12-17-19 St. Vincent, 7-15 Agen, 10-12-17 Dax, 12 Bergerac and prize 20 out of Bordeaux. He became 2nd Champion thanks to these results .

2021 Hermann Josef Ubachs from Waldfeucht won the 6th National Barcelona with a grandchild to pigeons from Ronald Geerdink.  Hermann bought on the ZLU prize reward a child to Daan the 1st International Agen and this became the base breeder on his loft.

2020 Combination van Ouwerkerk-Dekkers win the 16thNational Agen 2020 against 5,151p with a child to Wringer from Ronald Geerdink.

2019 Bob Jansen from Bergambacht win the 48th National Agen yearlings with a grandchild ‘Daan’ against 3,940p. International 86th against 10,610p

2018 wins owner Ad Valk from Wegrestaurant Napoleon the 13th prize in the Algarve One loft race. This was the 1st Dutch pigeon. Strain ‘Vale Montauban’

2017 Stoker Heems win on Provincial Vierzon the 6th prize against 6,532p with a cock out of the strain to the ‘Vale Montauban’

2017 win Jaap Mazee 1st prize NPO Limoges and with the same pigeon two weeks later the 1st National Sint Vincent and 4th prize against in total 13,24p! Father is ‘Zoon Slimme’ from Jos Pepping out of a grandchild ‘Vale Montauban’

2017, The very heavy Dax from 2017 was won in Sector 3 by Arie en Dennis van de Meer from Utrecht. This pigeon was bought at Nico Volkens and is out of the strain of ´Vale Montauban´. This topper won the 14 National Bergerac, 48 National Perigieux and the 4 National Dax against 10,429p and the 1st prize Sector Dax against 2,565p!

2016 Simon Schoonen from Bergen op Zoom has many different pigeons from Ronald Geerdink. Amongst other the 10-1571582 ‘Zoon Vale Montauban’ , 11-1693970 ‘Kleindochter Kleine Prins’ Saarloos Klaaswaal and B09-4303045 ‘Meirlaen duivin’ Base breeding hen at Ronald Geerdink.
Due to these reinforcements became Simon Schoonen 3rd departments champion Marathon 2016. (1.547 fanciers Department Brabant 2000 per 2016)

2014 Philip Geerdink wins with a grandchild ‘Superkanjer’ who Ronald Geerdink bought from  Ron de Jong the 10th national Perpignan, 45 national Bordeaux and 86th National Marseille.  In 2018 wins Philip with a son to this topper the 3rd International Perpignan!
Before brother Philip won the 65 National Dax ZLU (full brother ‘Vale Montauban’) and in 2014 the 98 Nat. Narbonne.
Out of  Ronaldo is son Advaita from Ronald Geerdink (1st provincial Bergerac, 7 National and 4th best pigeon North Holland 2008) wins Philip with his Tommy 43 National Agen ZLU 5.930 in 2017,
94 National Agen 13.030 and 78 National Agen ZLU 5.754 in 2018.

2013 Cor de Jong from Leerdam who won the 1st prize Bergerac international with the 11-1763672 against 13,273p. Strain Ronald Geerdink via Ad Valk.
Cor de Jong is also the owner to the 10-1780343 who won 20 National Perpignan and 48 National Mont de Marsan. This is a direct daughter to the ´Valk´.  Ad Valk is the owner of the ‘Valk’ who is bred out of pigeons from Ronald Geerdink

A few fanciers with pigeons from Ronald Geerdink

Nico Volkens wins with ‘Red Terror’ 43 Nat. Marseille and 83rd on a very heavy national Barcelona .
Brother ‘Red Terror’ won the 56th Nat. Barcelona and are both out of the 03-2292104 who Nico Volkens bought at Ronald Geerdink. Strain ‘Vale Montauban’

Wiel Cramers wins with two cousins to the ‘Vale Montauban’ 8th and 50th National Bergerac against 16,000p. The 8th National won another two prizes within the top 100 National and was sold afterwards for a big amount of money via Jan Hermans

Sam de Jong , Heemskerk won with a grandchild to the ‘Vale Montauban’ 1st Ace bird Marathon Rayon B in Northern-Holland

Combinatie Stoker won with ‘de Muller’ 4x within the first 150 National.
With the ‘Rode 75’, who is a half-brother to the ‘Vale Montauban’, he won twice within the top vloog 10 National

Duncan Goodchild has top pigeon out of a son Dure Cees coupled to a daughter 1st Int. Perpignan from Vertelman. He won ao. 18th Alencon against 4,500p

Bosch Prattenburg won with a grandchild in 2019 out of the 176 who is a direct daughter to Stien, the 3rd NPO Bergerac and the 20th National. In that same year he also won the 163rd Nat. St. Vincent. 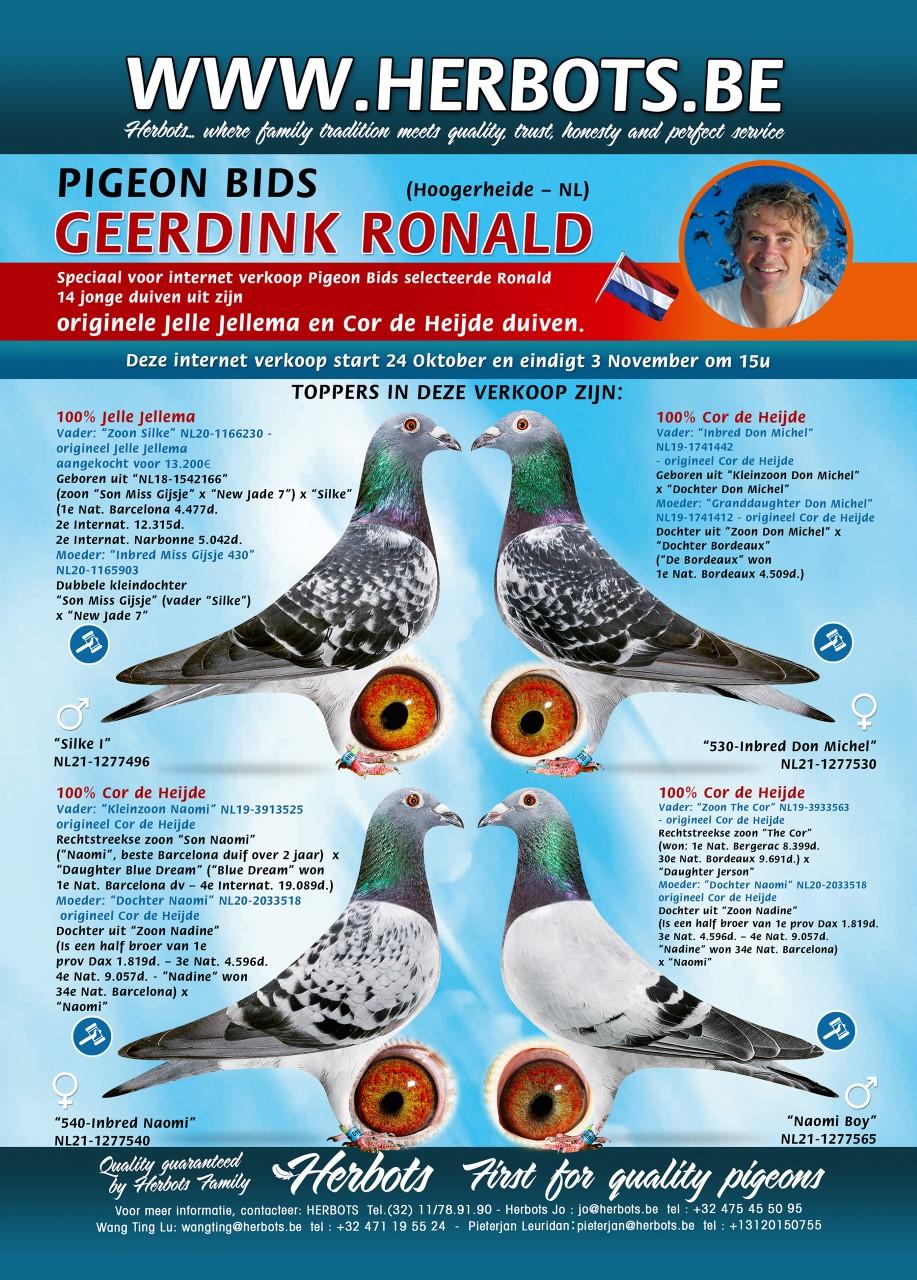 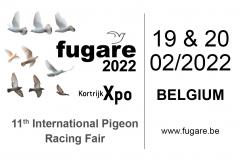