“There are some that never lose it’. With this in my mind I drive direction Ruien, a partial submunicipality of Kluisbergen to visit Maarten Leutenez. To make it clear straight away, you can classify Maarten amongst the best young fanciers within the Belgian an International pigeon sport.

It is a bit a story of a late contamination. Father Eddy Leutenez doesn’t need to proof anything anymore. Once in Gavere, then in Semmerzake, Eddy was one of the best that was to be found in what once was called ‘The Golden Triangle’ around Zingem, Gavere and Semmerzake. A born winner, always looking for the best both in the potential of pigeons as in results, no effort was too much. Also several other top lofts came to strengthen their own breeding loft with pigeons from the strong strain of Eddy.

As illustration an overview of the won titles in the past (this is only a selection out of the many top victories and classifications) :

And then the health of Eddy threw a spanner in the works and they decided to stop racing pigeons. Stopping after winning of a few nationals, winning of about every classification possible…that was though but also with a lot of satisfaction when looking back, nothing to be sad about and just take care of your health. And just at that point the pigeon germ strikes son Maarten (who wasn’t that interested in pigeons before due to other sports ambitions), and not even a bit..

Immediately the same winning mentality showed as his parents and there is no room for half-work for Maarten either. Already from the beginning when he helps out Eddy it seemed that he had it in his fingers to bring pigeons in a top condition to a race. The first top results don’t stay out for a long time and once this feeling is present there is no stopping Maarten anymore. I remember Eddy saying at the beginning stage about Maarten ‘he is even more possessed then I am’ !

This was a gods’ gift for Eddy. As he was convinced that pigeon sport was over for him, it restarted at full speed. He could and can give his experience and knowledge, talk to his contacts of the old days to mentor his son and to have his back. What strikes even more is that it is a family sport at the Leutenez family. Also both their partners are in for the full ride and help out where they can. Also within the family they help out each other when it is getting too busy with the several races.

The Leutenez colony isn’t a mega loft. The top results they set are done with a relatively small team of pigeons. The shortage in space in Kruisem is a guarantee for a very hard selection. The season of 2019 where started off with 24 widow cocks whereof about 16 effectively were being raced after some losses and injuries. The team of youngsters (also due to lack of space) exist out of 75 young pigeons. In Ruien (Kluisbergen) on the new lofts of Maarten the season was started of with 50 young pigeons from the Family Herbots and 30 youngsters from Marnix Leutenez. The base of this all is a breeding loft with 25 breeding couples.

Off importance is the effective restart after the big sale 2 years ago, where the top of the racing loft and breeding loft was being sold.

The widow cocks are being raced on classic widowhood with as focus the greater middle distance and long distance. As the season of 2019 was a restart, also 2020 will be another year of transition with a small team of widow cocks in Kruisem and a few widow cocks in Ruien.

Just to point out, in the season of 2019 they raced from two locations. The own Leutenez-pigeons where being raced in Kruisem (home of Eddy) which was also the case the past years (and this both with the old and young pigeons). But we have to put in perspective in that way that it was a year of transition after the big sale two years ago (where almost all the top pigeons where being sold of).

The family of Maarten moved to their new place in Ruien (Kluisbergen) with view on the ‘Kluisberg’ and the ‘Kluisbos’ close to the border of the province of East-Flanders and the province of Hainaut. Spacious new lofts were build and these were being filled at the beginning of the season with pigeons from the Herbots family (see further) and a few youngsters for the heavier long distance work from Marnix Leutenez out of Kruisem.

Interaction with the Herbots family

Throughout the years the Leutenez family established a good bond with the Herbots family. Several top pigeons moved direction Halle-Booienhoven, the sale of two years ago was organized by the Herbots family and at the moment super crack ‘Allaphillipe’ lives at the five star breeding loft of the Herbots family. A step further is the exchange of young pigeons that are being raced at the each other lofts. 50 youngsters moved from Kruisem towards Halle-Booienhoven and the other way around also 50 youngster went from Halle-Booienhoven to Kruisem. These youngsters are being raced very hard and are being selected out….and apparently at both their satisfaction after this first year. This is how the 3rd National Argenton against 23,258 young birds on the name of Milan Leutenez, son to Maarten, is a direct Herbots – pigeon. 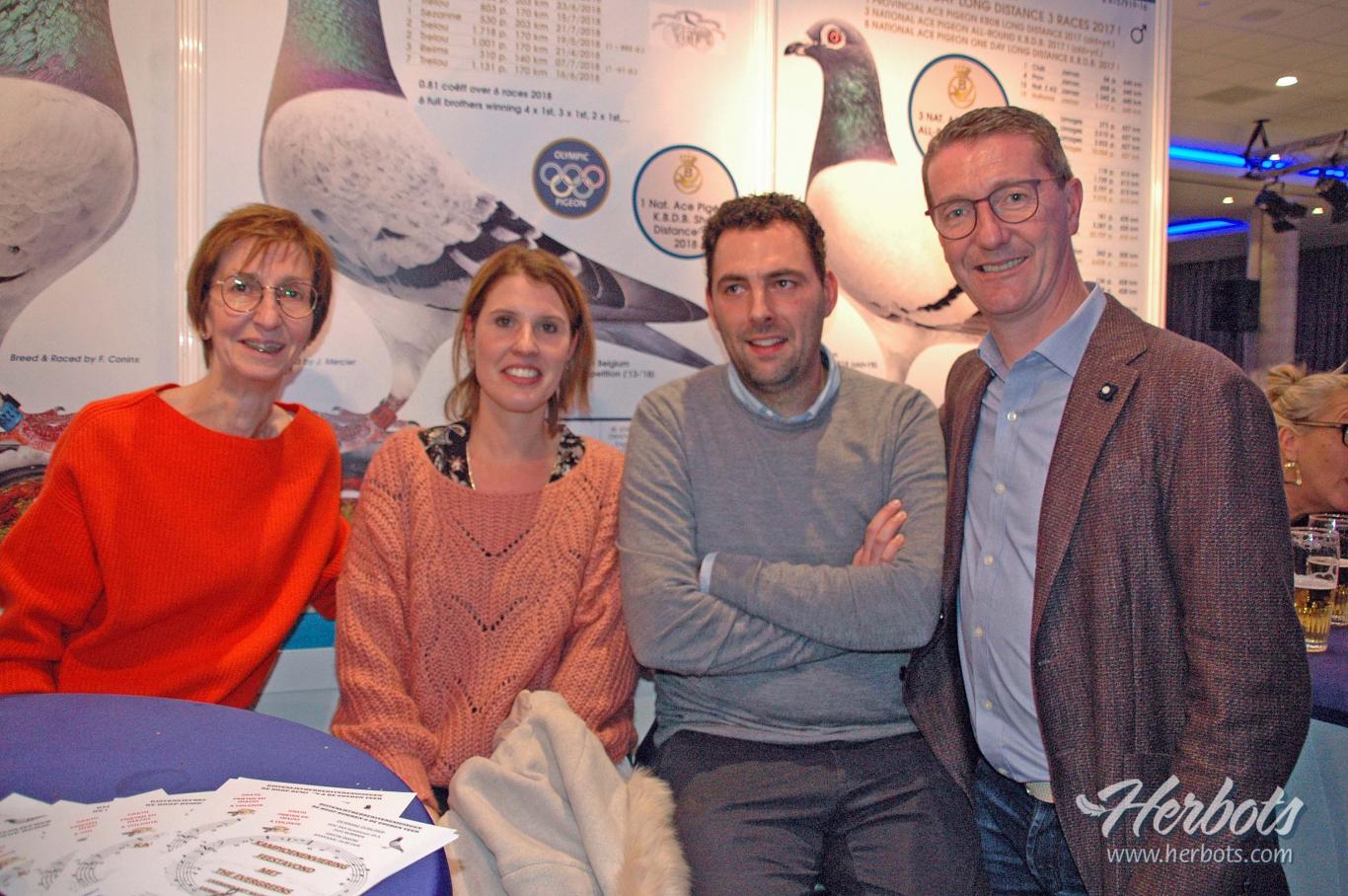 The golden base from José, Rita, Bolleke, Allaphilippe, Oscar…..and other top pigeons

Being at the right spot at the right time can be very important in live. Eddy witnessed how ‘Bolleke’ won the 1st Provincial Tours in 2009 at José Denoyette and this with very though weather, a real power statement. Eddy, fast as he is, bought ‘Bolleke’ from José and it was a hit in the rose. She turned out to be an extreme good breeding pigeon and became, together with her parents José & Rita (Rita was already 5 years when she joined the lofts in Kruisem), who were also being purchased by Eddy later, the founding pigeons of the colony. Accomplished with some De Rauw – Sablon (and further on Mannaert and Aelbrecht)- blood and the old own strain under the form of ‘Milan’ and his off spring they became the pillars of the colony (the own strain was also bought back from Marc De Cock).

What this family has put on this world is phenomenal. In all top pigeons we find these strains with ace birds, all-round pigeons, national victory inclusive. They are strong pigeons with a strong carcass, a solid grip and a good GPS. It is a breeding strain that is being kept relatively pure and despite this keep on given very good genes.

A short overview of the results of off spring of this breeding line:

This results were set by ao:

Trapke : 1st national ace bird All-Round KBDB 2017 (father ‘Trapke’ is a grandson ‘Rita’ and has as mother a granddaughter ‘Rita’) 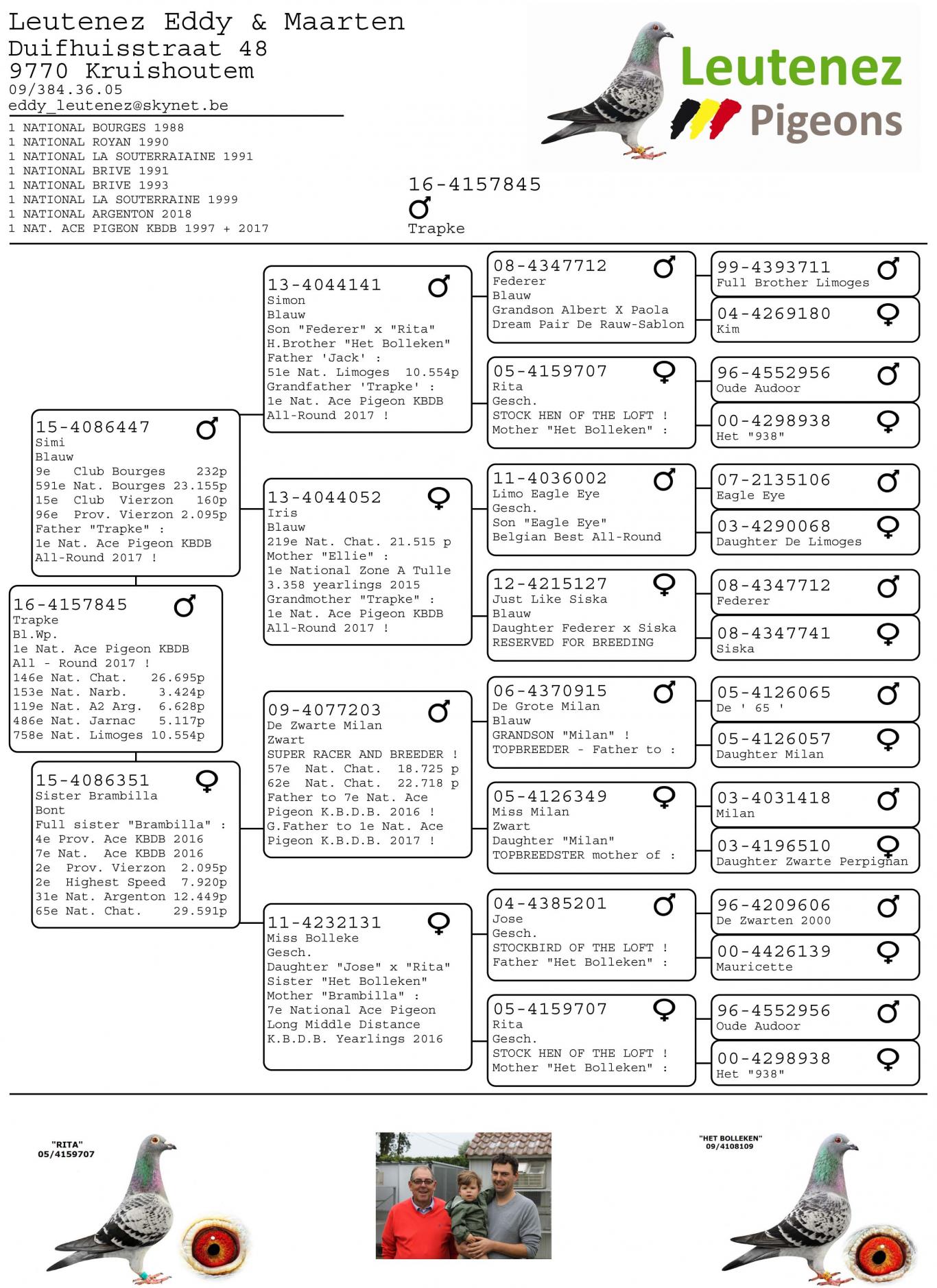 Cavendisch : 2nd national Limoges 2015 (has as mother a daughter ‘Rita’) 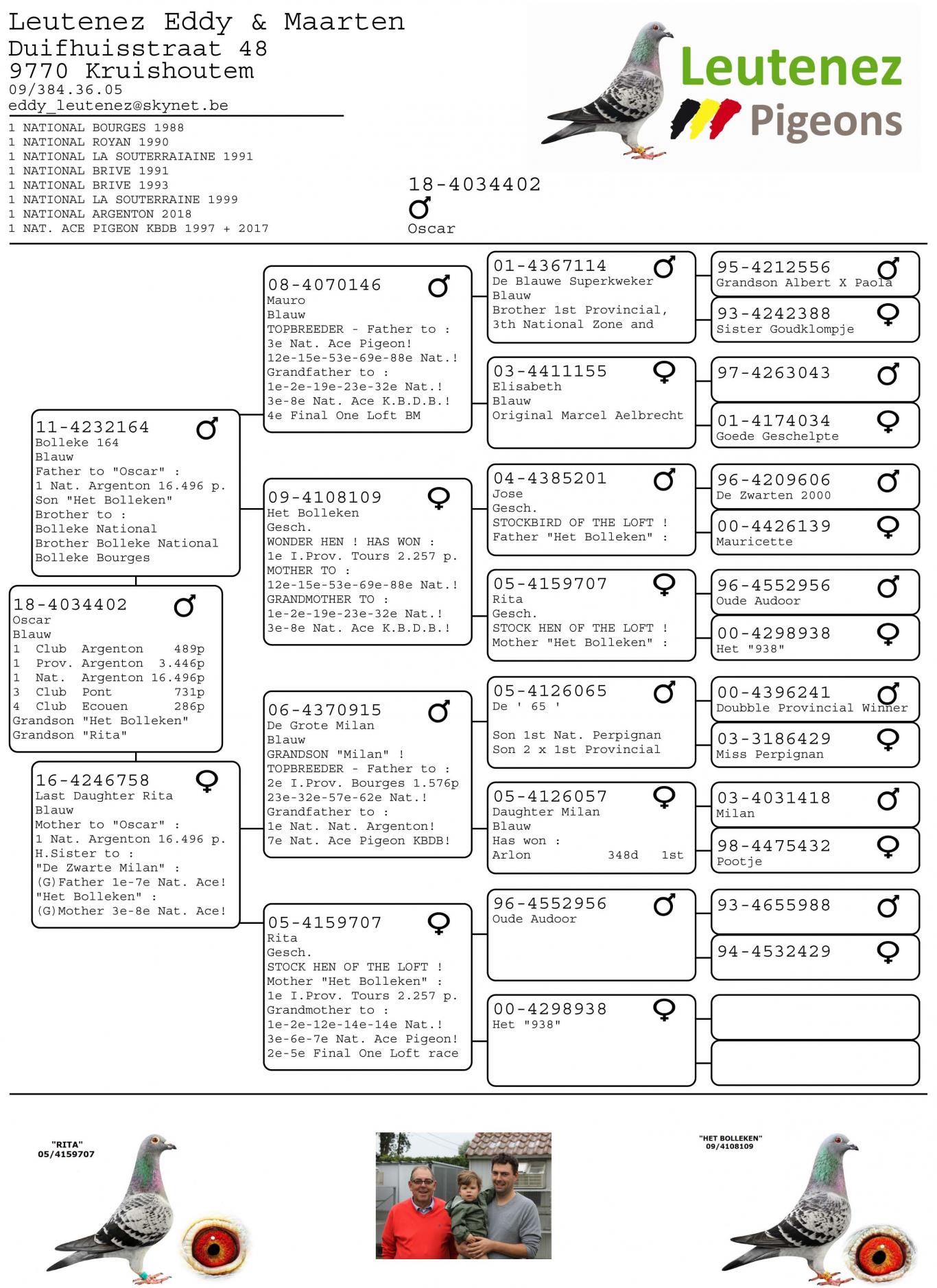 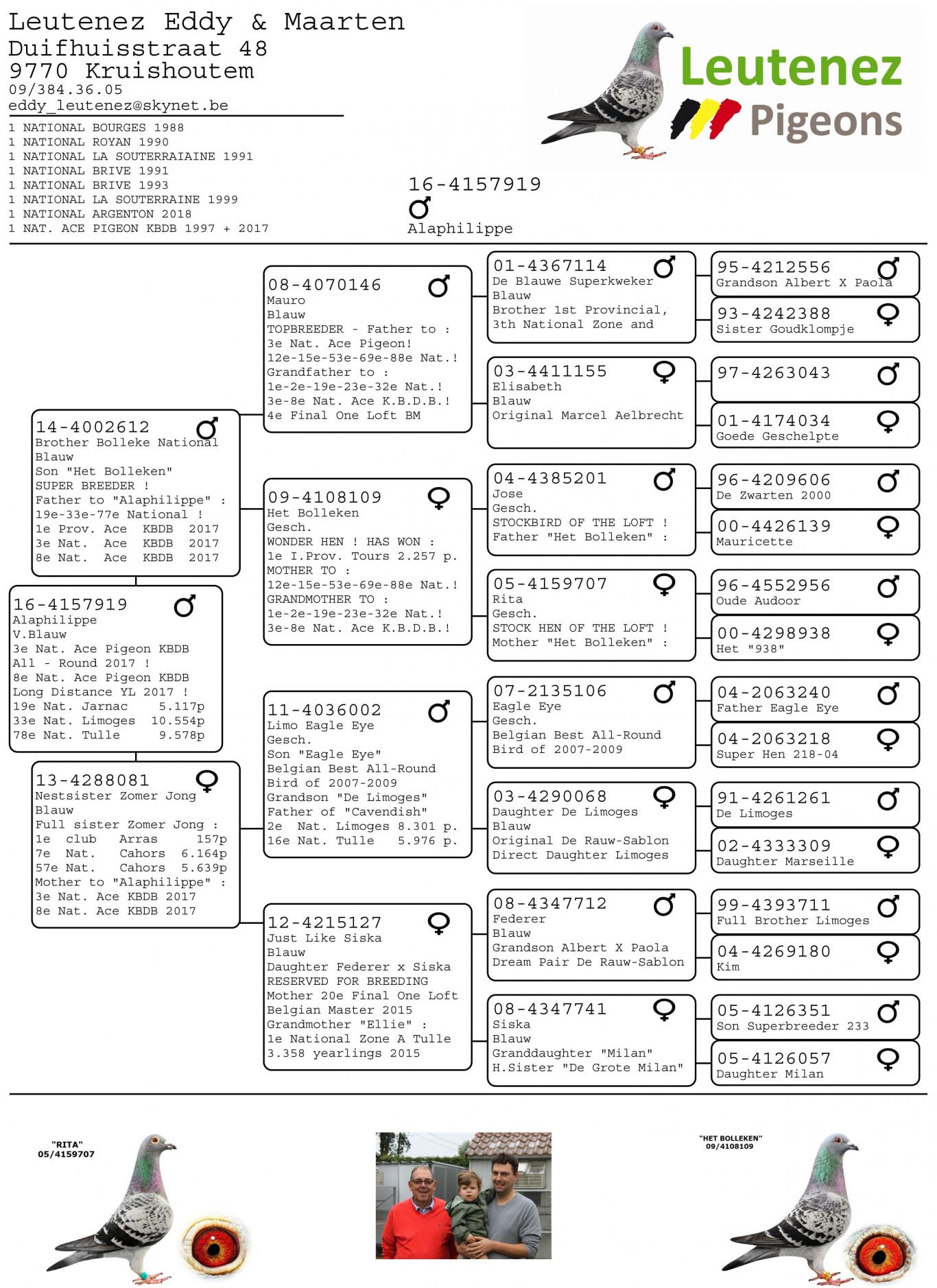 This story doesn’t end in the season of 2019 with a few very strong performing year birds such as :

These 2 year bird top pigeons are part of the 12th place in the National Championship KBDB Long Distance Year birds 2019. 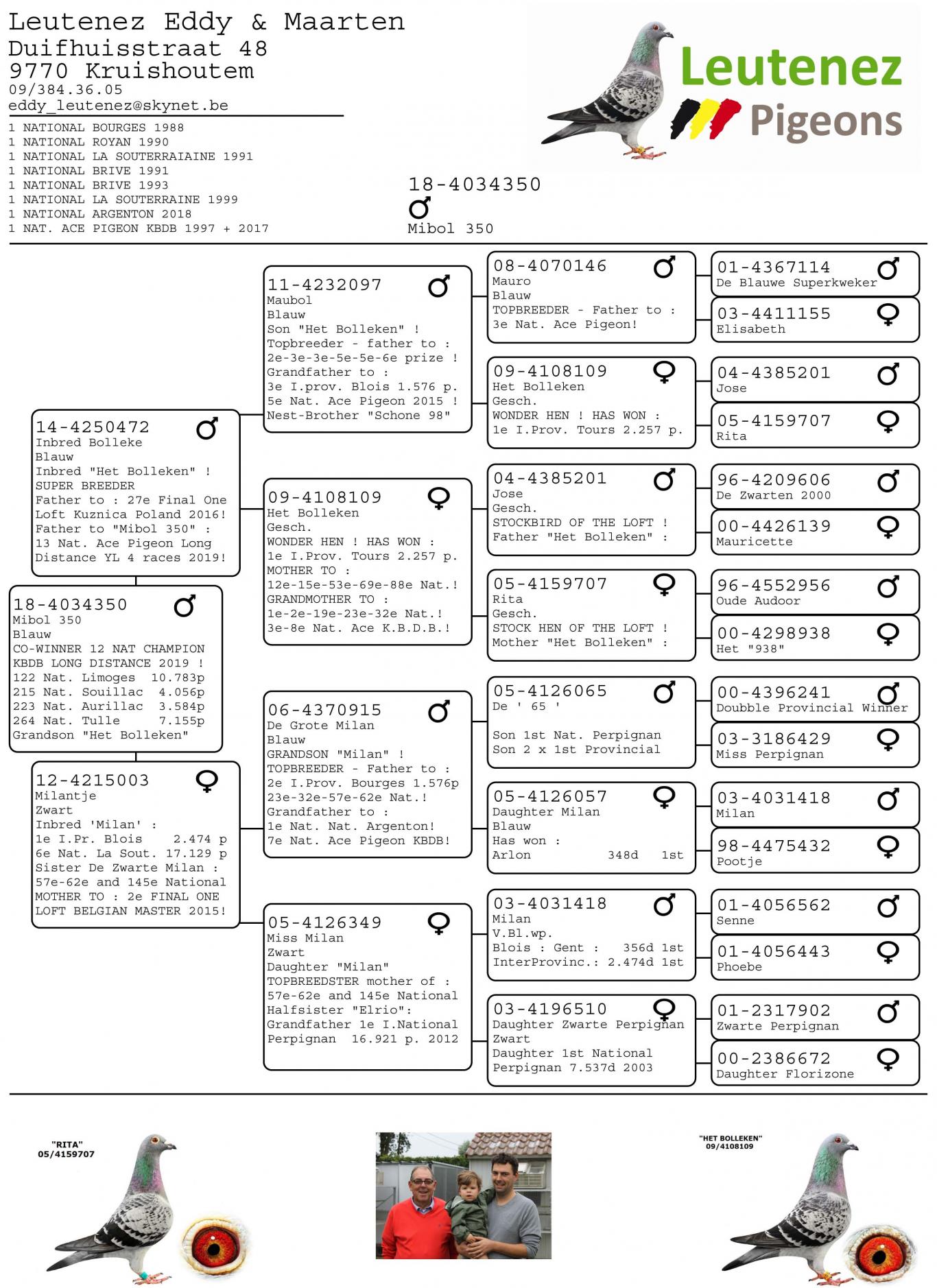 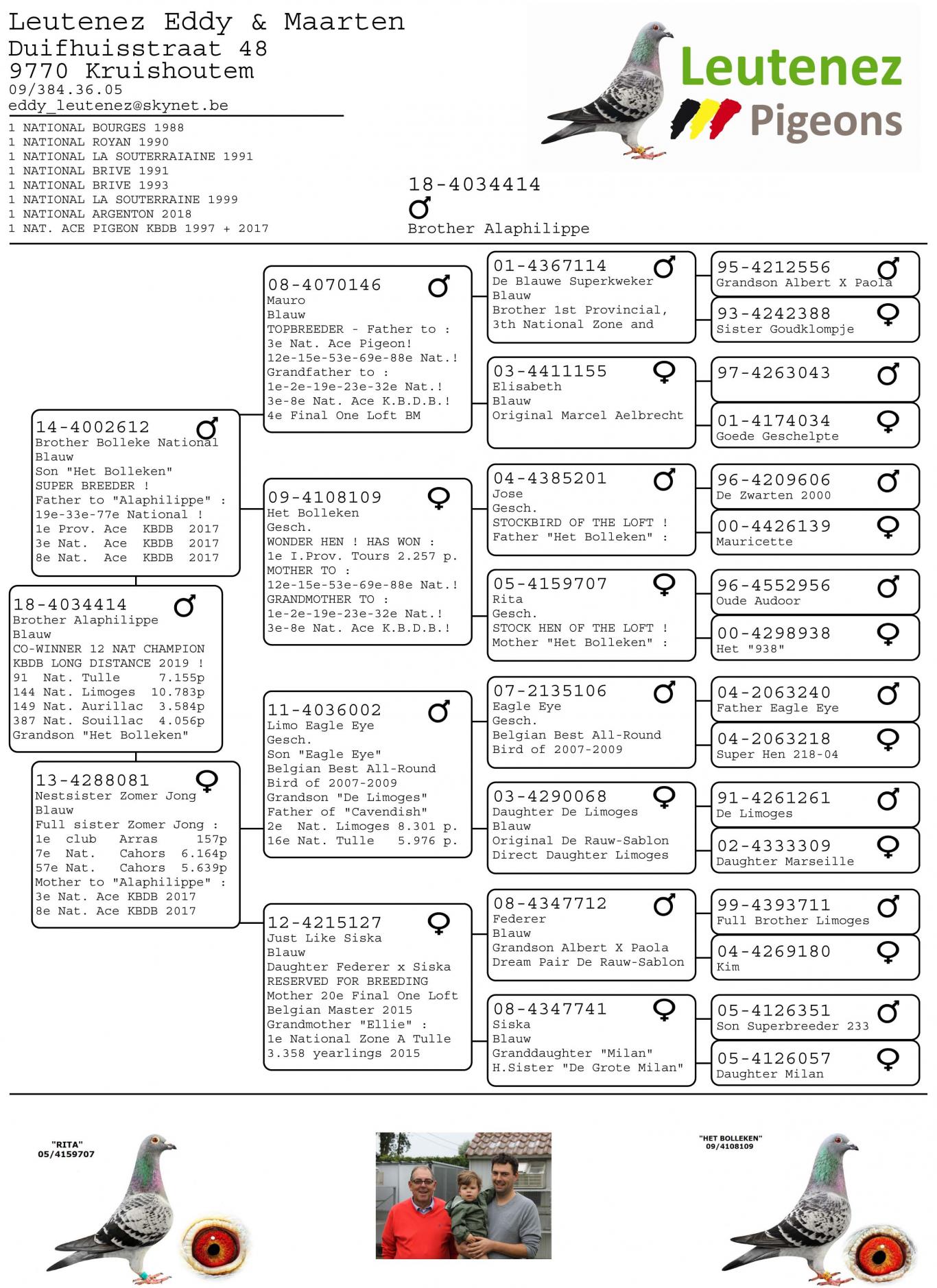 It doesn’t need a lot of discussion that these pigeons are very wanted. Strong selected out of a relatively narrow breed and year after year supported by strong results (and also on other lofts such as the 2nd national Montluçon at Frank Paridaen) the interest is big. But the priority is still the extension of the own breeding loft and racing team.

A good and correct care

Also that is in their genes. Pigeons are taken care of well, point ! This was and is with Eddy the case and this isn’t any different in Ruien. The pigeons reside on healthy, clean lofts. The care is punctual, correct, without too much fuzz, but the pigeons are short of nothing and no effort is too much to bring them in top health at the start. This results in very beautiful pigeons, soft feathers and all with a very strong carcass.

The food is from the Vanrobaeys-gamma and side products are the Röhnfried-supplements and Herbots. In a medical way nothing is left to the coincidence but work pro-active and preferably as less as possible reactive. The widow cocks (season 2019 only cocks) are raced on classic widowhood and the youngsters on the sliding door system.

No hocus-pocus but the believe in the good pigeon and the correct care. Loaded with a back-pack full of top experience there are not a lot of secrets left for Eddy and Maarten than the effectiveness of a ‘good pigeon’ that needs to do it.

With a lot of confidence on to the next season

They look out with a lot of confidence and passion towards the next season and this both in Kruisem as in Ruien. The quality isn’t gone obviously after the sale two years ago, the results of 2019 (with a very modest team) were more than convincing and the new loft in Ruien has been warmed up by know with a 3rd national victory as the icing on the cake.

The seriousness and perseverance glows of Eddy and Maarten faces during our talk, but this in a sportive and broad thinking manner. With focus on the middle and greater middle distance, long distance and a pinch of extreme long distance with the input of national Champion Marnix Leutenez the future is present !  We award this to this family, they are for sure a stimulus for pigeon sport.

Congratulation and a lot of success from the entire Herbotsteam !