There are some certainties in pigeon sport ! One certainty is that some solid values can’t be taken out of consideration in the results of the head of the races.

And why you wonder? Because they have a very strong, broad breeding line and because champions have the drive to win.

That the tandem (Joost) De Smeyter – Restiaen won again a national race on an extreme long distance is the confirmation of the above. After international victories Perpignan, Pau, Sint-Vincent, Barcelona and many top rankings the next pearl is being added to the already richly filled crown.

In the end it might seem simple, but that isn’t the case at all. Dedication and sacrifices to get to these results is for Joost and his gang quasi unlimited. The eternal search for the best pigeon, the daily effort for the best result…

A breeding loft to be jealous of where the best of the best within the extreme long distance world resides delivers on his own loft, but also on several different other lofts, pigeons that are capable to race top with real pigeon weather on the most heavy races. Weather where you have to work in is Joost-weather.

On Sint-Vincent a team of 47 cocks on widowhood were basketed. This was the usable and available balance that was left from the team of 55 that raced Pau.

Joost had full confidence, the condition of the pigeons and their racing behaviour went clearly crescendo and the weather circumstances would demand of the pigeon hard work.

And this is how it went…..The pigeons were released in Sint Vincent with a day delay out of respect for the immense human suffering that had arised in certain regions of Belgium, Holland and Germany due to the big flood. Light headwind, warm temperatures and the distance made it an honest, though race. It is also striking how many first signed or early signed pigeons arrived first

‘Tadej’ rises above all

Joost is a cycling enthusiast and this national victory that was won at the end of the Round of France with as winner Tadej Pogacar gave the inspiration to baptise the national winner ‘Tadej’.

He clocked in the evening. The clocking in France did suspect that in Belgium also pigeons would made it home that same day but it would be hard. At 21h56 for a distance of 876km ‘Tadej’ raced as a rocket in to his loft. The motivation was top. With an average speed of 999,299 m/m it was clear that this would be a top ranking.

It wasn’t a real surprise that he was going to be ready. On Pau he came home in Melden as 3rd pigoens, and over 2 seasons he ranked himself 3x within the top 100 national. No crack to be, but already a crack of a pigeon.

‘Tadej’ is a nice pigeon. Not very big, slim with a very nice wing and flexible wings. A real type of the modern extreme long distance pigeon.

His origin is a 5-stars origin.

His father is ‘Odilon Junior’, a son to ‘Odilon Decuyper’, who was ace pigeon Barcelona 2007-2009.  ‘Odilon Junior’ is the son to ‘First Lady’ who is on her turn already grandmother to the 1st Soustons.

Mother to ‘Tadej’ is ‘Gital’ or the best of the old base strains of the breeding loft from Joost namely a daughter ‘Gitan’ and daughter ‘Grand Cru’ (or a ½ sister ‘Peggy’ and ½ sister ‘Laval’).

Another proof, without that it is exact science, that good come out of good, or that the chance to succeed is bigger.

During our visit also Yvan De Ruyck and his wife Marlène were present. On the past Barcelona Yvan had a world results with his team. Also in the head pigeons from Yvan is a lot of origin from Melden to be found.

Don’t leave anything to the coincidence

There’s no lack of dedication, but this isn’t a guarantee for success. All the pieces of the puzzle have to fit. The medical control is still in hands of Pascal Lanneau, the food comes from Versele-Laga and the side products from Belgavet, where Joost had a lot of input in a few of the products.

Applying this consequent and follow up can provoke next to a base health form…and this form was clearly present with, next to a lot of top pigeons, a national victory on top!

Three heavy races are still up. And it doesn’t need explanation that we also expect pigeons from Joost in the head of the race on these races !

A wonderful victory on Sint Vincent will be the best motivation.

Congratulations from the Herbots team ! 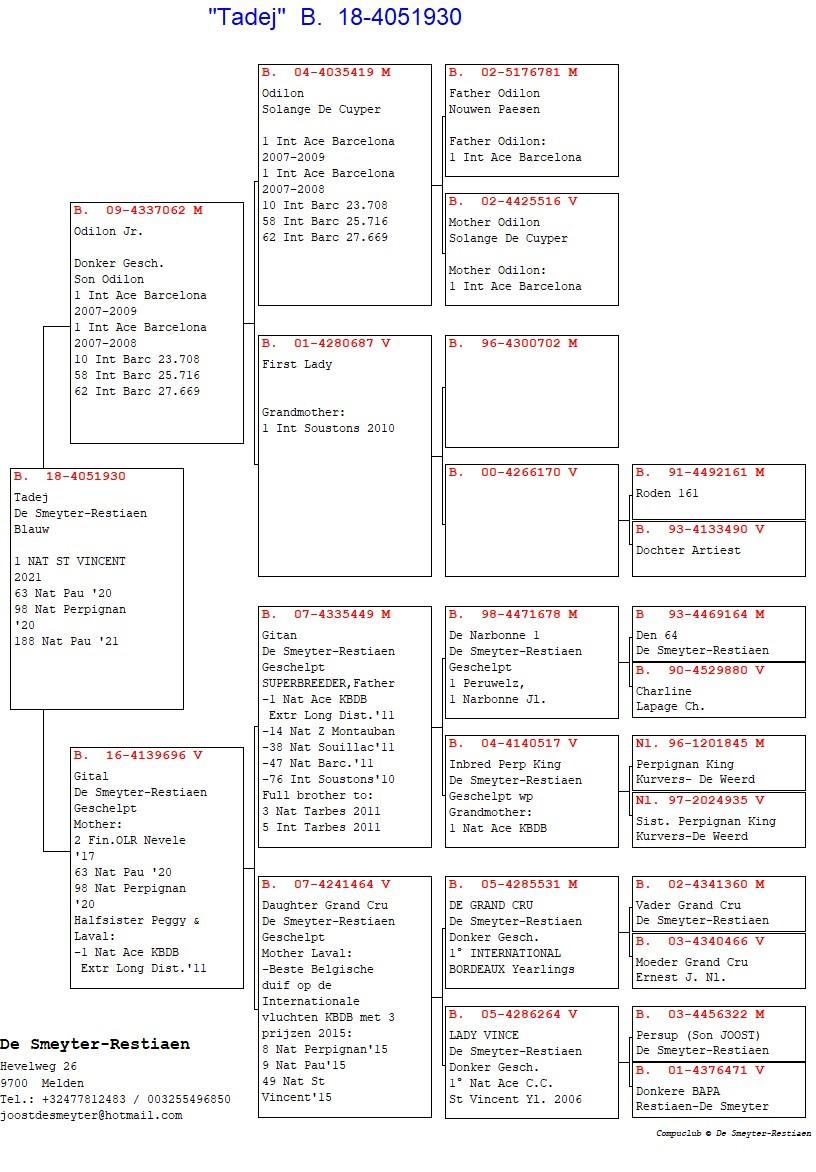