The season of the colony of Davy Tournelle was already a big success. After his national victory on Argenton with the old birds earlier this season he strikes again on Tulle and this time with his year birds. Both gold and silver are for the loft in Rummen and with 20x Top 100 national in both categories together he finishes his season with an amazing achievement!

In total they won in 2020: 2 x 1st National, 2 x 2nd National and 1 x 3rd National. With on top of that more than one ace bird on the greater middle distance which take care of the icing on the cake.

They stick since a few years now to a preparation in Spring which seems to be the right one for their racing team. All racers are being raced on the classic widowhood system, the cocks can always raise a youngster during Winter time and can start off the season with this. They were only being darkened due to the late start of the season and some of them already threw their 4th pin on Tulle so these couldn’t be basketed anymore. We like to race our best pigeons but once the moulting starts, we stop these as well.

For the hens they have a slightly other system, they have together with another hen, one cock. The first team came together in February during 5 days, then the cocks got 2 days of rest and then they got during 5 days again their other hen. We repeated this a few weeks later and in March we left them with their cock during one night so they wouldn’t forget them. The hens were darkened really well and are less far in the moulting then the cocks nevertheless our 3 first arrivals were cocks. Both sexes were being enlightened from the 21st of June and the lights will be turned off so the moulting can start. Nest game isn’t something we do after so many kilometres but we are thinking to do this the next season.

How is the training going now ?

We leave them out from March and start to build up the training sessions, now this season it was all a bit later but we choose to keep it bearable for us as well and all the pigeons train once a day. Only the hens trained during 14 days twice a day but we saw very little difference while doing this.

Along the season progresses, this hour of training isn’t necessary anymore for us and it is especially maintaining their condition than train hard. That’s why we called them in the last period after 40 minutes.

What did you do with the heath of the past few weeks ?

Normally we never race pigeons in this kind of weather, this year we had our youngsters on a short distance race (Momignies) and we drove our old and yearling birds that same night direction Momignies to release them ourselves. We thought that if they didn’t have to go in the heath of a lorry and basketed cool in the cellar, they could race ideal for one and a half hour. This didn’t turn out as we wanted it, so we aren’t going to do this ever again in the future. One striking detail, the pigeons in good shape were all on time and the ones who didn’t race really well at that moment came in later. These were taken out of the racing team to keep the schwung in the team and maybe this is the result you see on Tulle. We’ll never know.

Also here we think that we try to look too far, we mostly show the cocks to our racing hens in the afternoon for about 20 to 45 minutes and this in 2 groups. They are being fed each day at half past 4, also on the day of basketing and this is how they are being basketed. After arrival they can stay mostly 1 to 2 hours with their cocks but after Chateauroux they couldn’t even come together and gave their cocks on Sunday during one hour. This isn’t a fixed schedule but a feeling on the day of arrival and how fresh the pigeons get home.

For the cocks this is a bit different and always get to see their hen during 5 to 10 minutes before basketing. They are being taken away immediately and after the race they can stay together as long as the racing hens. Now for Tulle we left them together for the first time during half an hour as this was going to be their last race anyway. 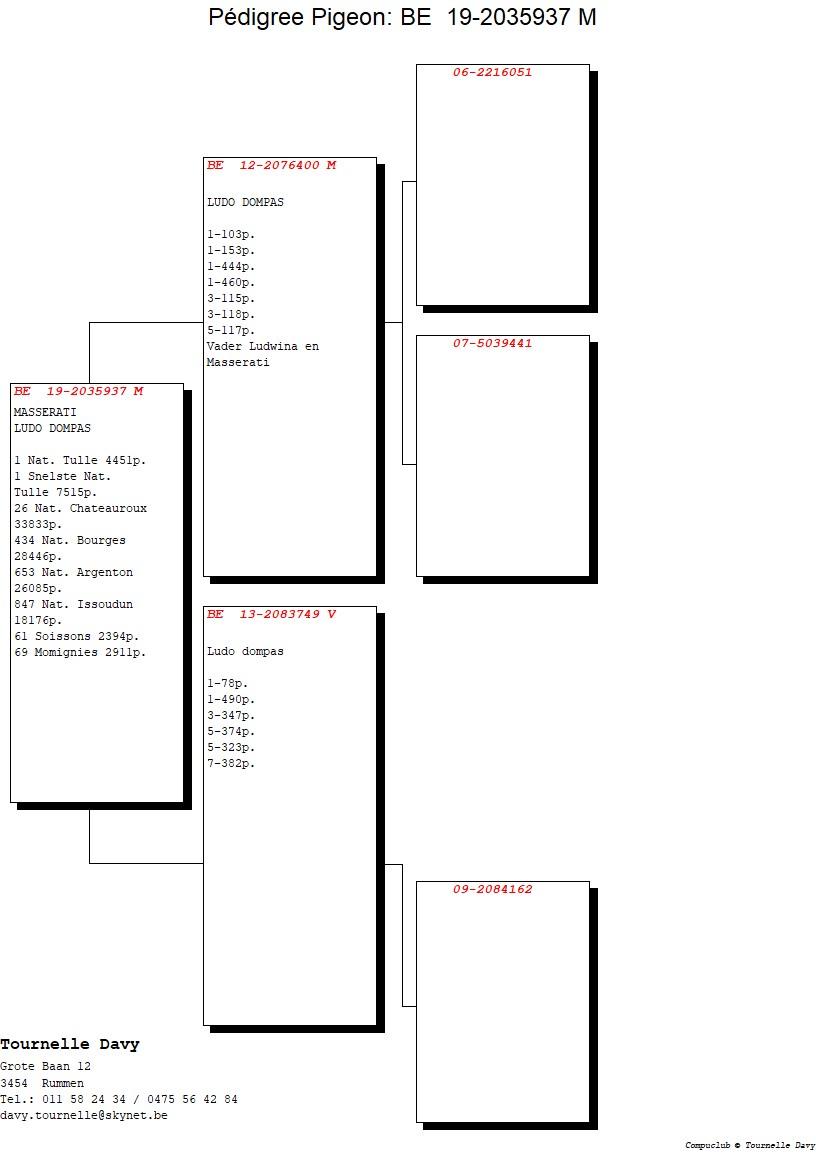 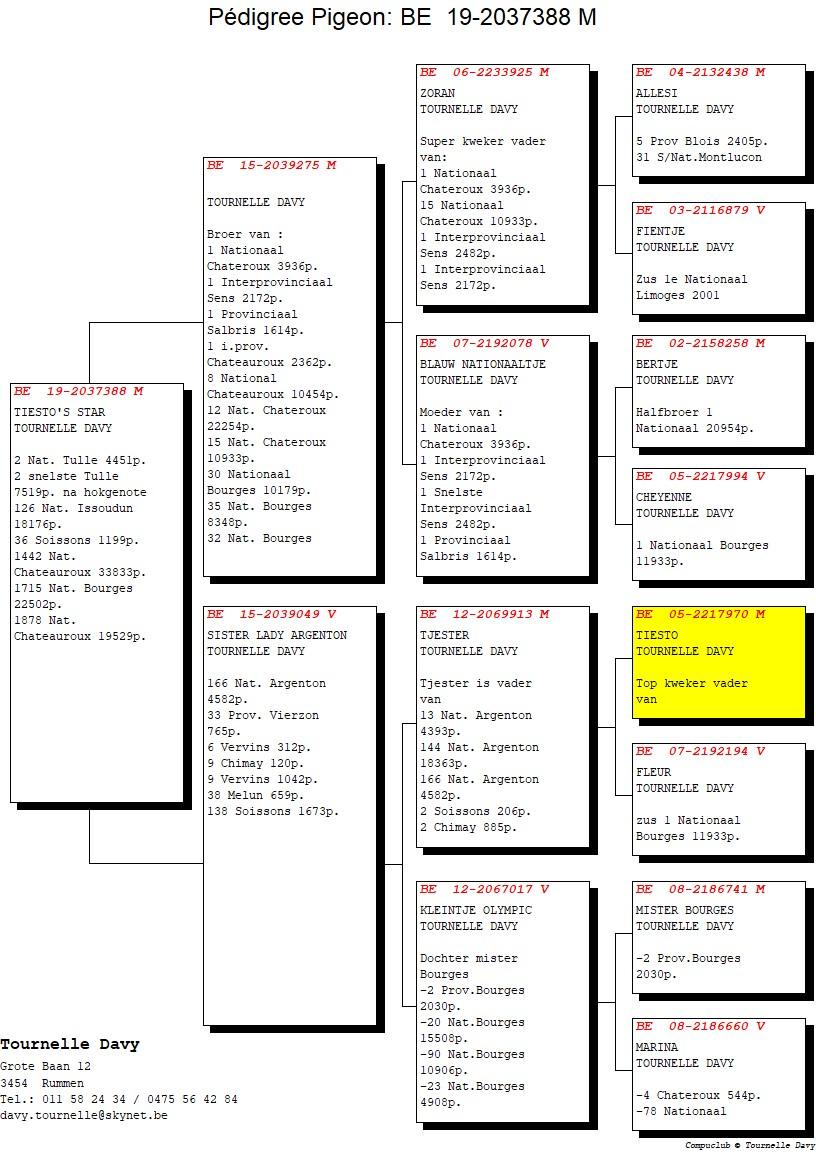 We feed during the racing season Versele – Laga, this is especially Sport Subliem, Gerry Plus and Energy I.C. Corn. Next to this is especially the recuperation an important factor. This is how they get Recup Fast and Minerales from Aidi at arrival together with Moorgold and proteins over the food. Sometimes they also get a K+K protein pill after a hard race. Aside this we make use of the Rohnfried gamma with especially the mixes from Carni Speed with Hexenbeer and Carni Speed with Blitz. On the day of basketing I always give CMK and during the week the food is being mixed 2 to 3 times with Energy Oil.

For the medical story I go during the racing season every 2 to 3 weeks for a check up to Raf Herbots from Velm and they got this year in Spring a cure against trichomoniases and parathapoid. Against airway diseases I cured before the first middle distance race and now 3 weeks ago a second time. -Against trichomoniases I give them every fortnight a pill and I maintain this by giving every week one time yellow drops over the food.

Davy & Patrick,  a big congratulation from the entire HERBOTS TEAM  with this new national victory.