Alex Rans (68y) and his wife Annie are world famous amongst the Flemish-Brabant fanciers as Alex is the president of the Brabant Union, the organisation that organizes races on the middle distance as well as doubles on the national races on the middle distance and long distance and as president of their local club ‘Sans Peur’ in Herent, one of the biggest and strongest clubs in Belgium with still 155 members.  But not only by that, they are even more famous in entire Belgium and abroad as they have been top fanciers on the extreme long distance since decades. As from the age of 8, Alex already clocked the pigeons by himself and Annie is responsible for the breeders. Alex learned all about pigeons from his father (Frans Rans) who was also president of the Brabant Union for 40 years. The pigeon germ is strong in the Rans family as the iron strong duo Stijn and Jeroen Rans (who won in 2019 Barcelona International) are the sons to Alex his brother. Stijn lives next to Alex and Annie in the paternal home

Their pigeons are especially built up with pigeons from Herman Brinkman out of Tuk (Nl)(bought end of the eighties).

5 children played a huge roll and are still to be found in the pedigrees of my current pigeons and others namely: “Arthur”, “Arafat”, “Zilverberg”, “Zoetemelk”, “Alexis”

“Arafat” is grandfather to the 1st Nat. Perpignan ’03 at De Schepper & Zn from Gooik and is father to the ”Ransduivin”, 1 off the best breeding hens at late Jef De Ridder (St.Ulr.Kapelle)

Also the pigeons from Gebr.Van Doorn from Someren(Nl) have played a huge roll.  A son out of their “Dexter” x a hen from Brinkman “Dorene” bred 3 different provincial winners, they won in 1997 1st Pau-Bordeaux-Barcelona.
A sister to them is also grandmother to “New Laureaat” 1st Internat.Barca’13

Also in the strain of the 1st Internat.Barcelona’19 from cousins Rans Stijn & Jeroen is the blood of the “317”to be found – in the 5th generation. But also the proof that the iron strong blood keeps on giving their super genes on and on.

They race only old pigeons on nest. Beginning of the season of 2021 will be started off with 40 old nest couples and about 80 year birds on total widowhood. This on the extreme long distance races (+750km) with focus on the international races.
The youngsters are only being trained if possible and this after the season of the old birds and until about 200km.

30 breeding couples take care of all the racing talent in Herent.

In Winter until end of February the racing team are resided in aviaries and from half of September. They get a moulting mixtures and once the old plumes have changed totally in new feathers they only get yeast.
They are being placed on to the lofts beginning of March, the year birds are being placed together and can pair up, lay eggs and breed but can’t raise youngsters.

In a matter of food they give Super Recup from Anthoons and this once a day as much they can eat. When the first leave their nests, the hens will be placed in the aviaries from where they fly out. From then on they get an obliged training during 1 hour, first the hens and following the cocks. After the training the hens come in on the loft and get their food in the hallway. At that moment the cocks are in the aviaries.
The old pigeons can come together once around the 20th of April, they are being trained and the nests are being taken away in function of the foreseen races. They always get as much to eat as they want and this is also Super Recup, once they race above the 400km this is changed into Race Exclusive from Van Robaeys and the last two days before basketing for a long distance race they get Top-Energy. Top-Energy is what they also get in a separate cup in their box the last 2 days before basketing and this mixed up with TOVO, pealed sunflower seeds and hemp.

Last year all the pigeons were vaccinated on the 24th of February against paramixo, on the 11th of March against small pocks, on the 21st March against worms (2 days water) and the racers also got on the 7th of April a drop of giamectine.
When they breed they get a cure against trichomoniases during one week and if necessary also against coccidiosis. In December during 2 weeks parastop. Alex is lucky that his cousin Stijn who is a vet doesn’t live too far and can interact quickly if necessary.

During the pigeon season there is a weekly manure check and every Sunday before basketing of a long distance race all pigeons that have to go along get a pill against trichomoniases, so at the most 3 times a year.

In a matter of side products they make alternating use of Giantel and Belgavet (Joost Mix system) and aside that twice a day a mixture of different kinds of fresh grit and red stone. They make a lot of us of Avidress in the water and at arrival they get electrolytes and Lugol in the drinking pot. Also at arrival of a long distance race they get immediately a K&K pill from Rhönfried for a quick recovery.

I look up enormesly to fanciers as my cousins Stijn and Jeroen and also to Jan and Joris Rommelaere and Luc and Cedric Sente.
Also I learned a lot from the late top fanciers Louis Van Der Wielen and Jos Deno.

Nice to know is that top pigeon 'Zevlakov' is the father to new topper 'Chadli'. 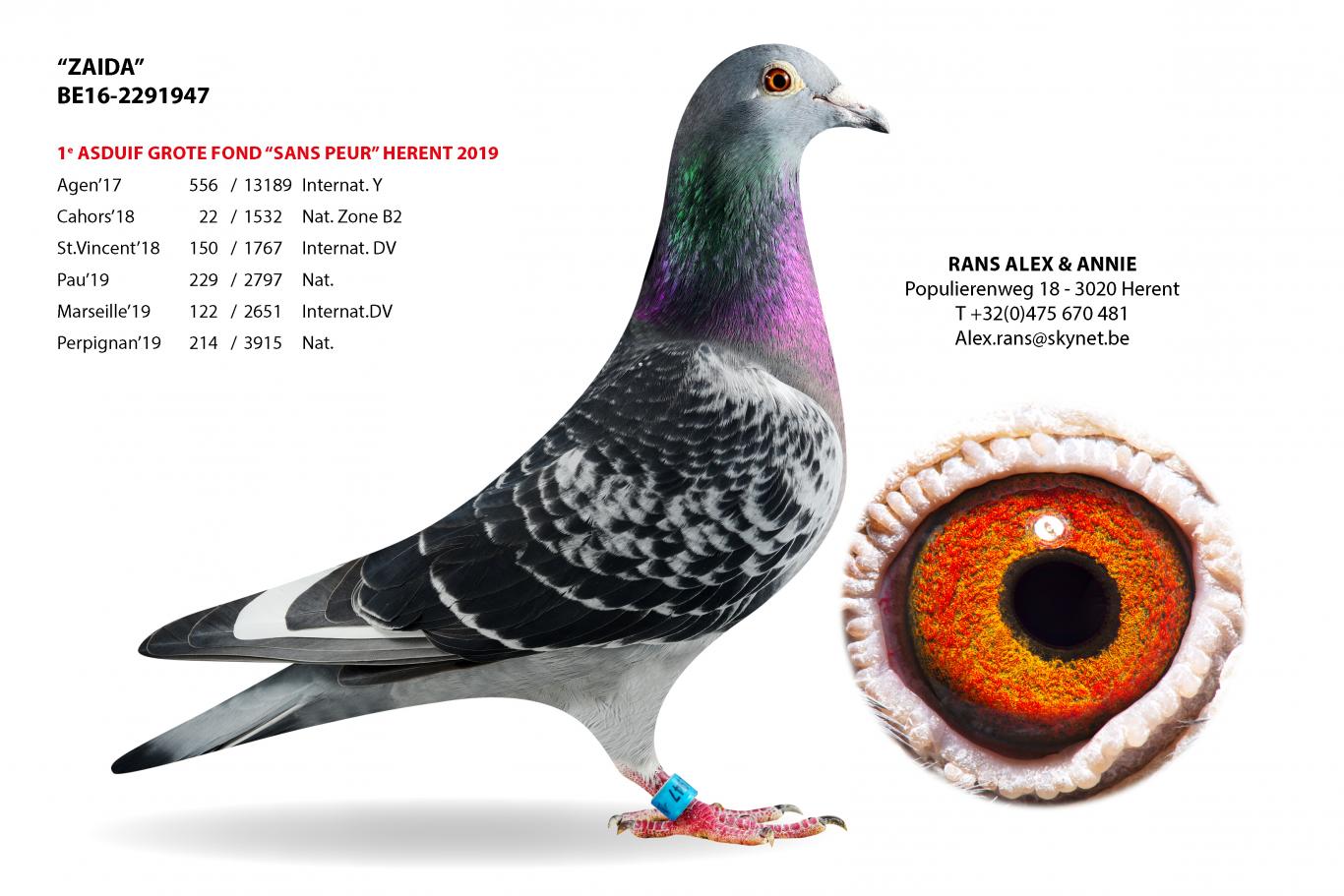 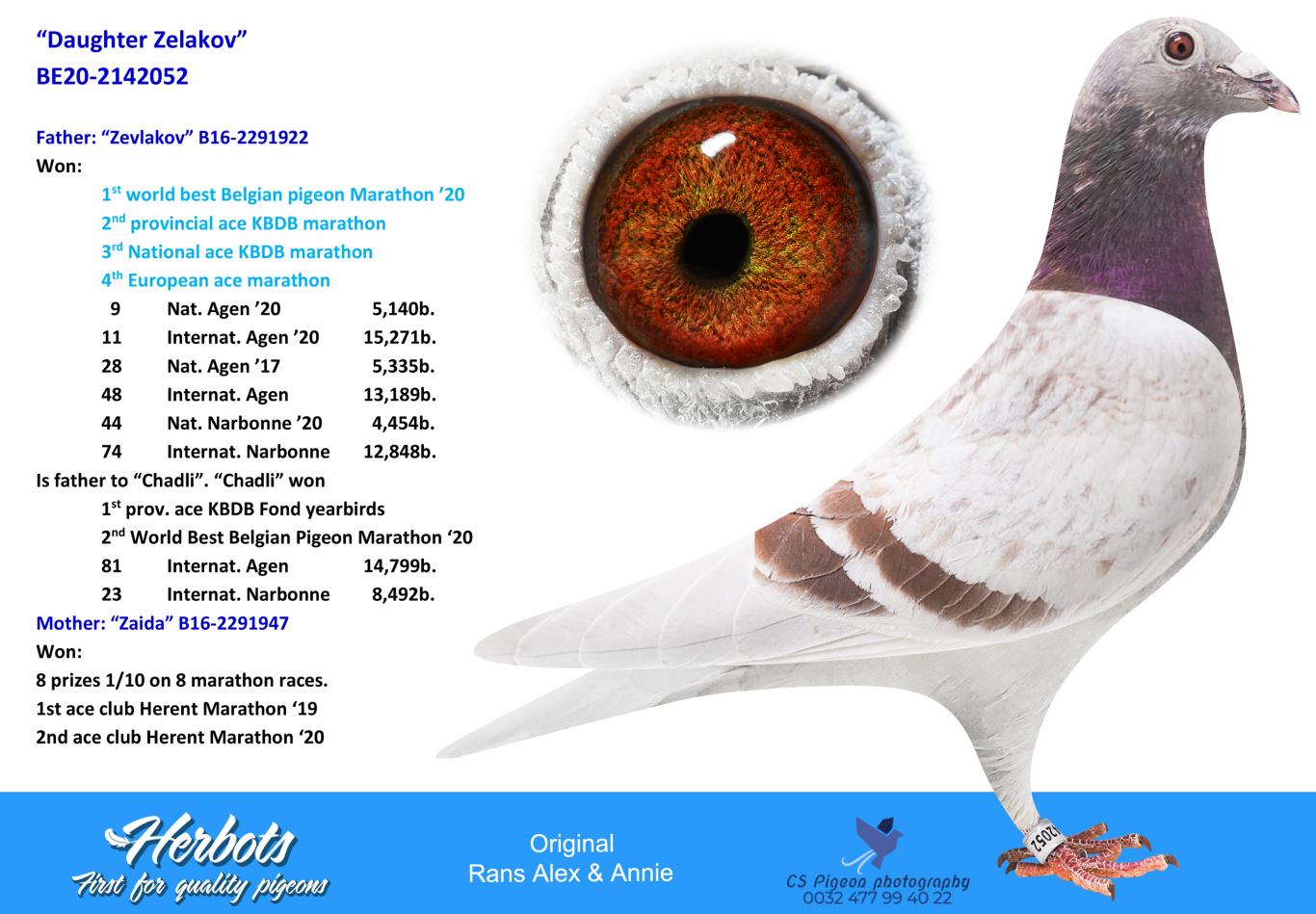 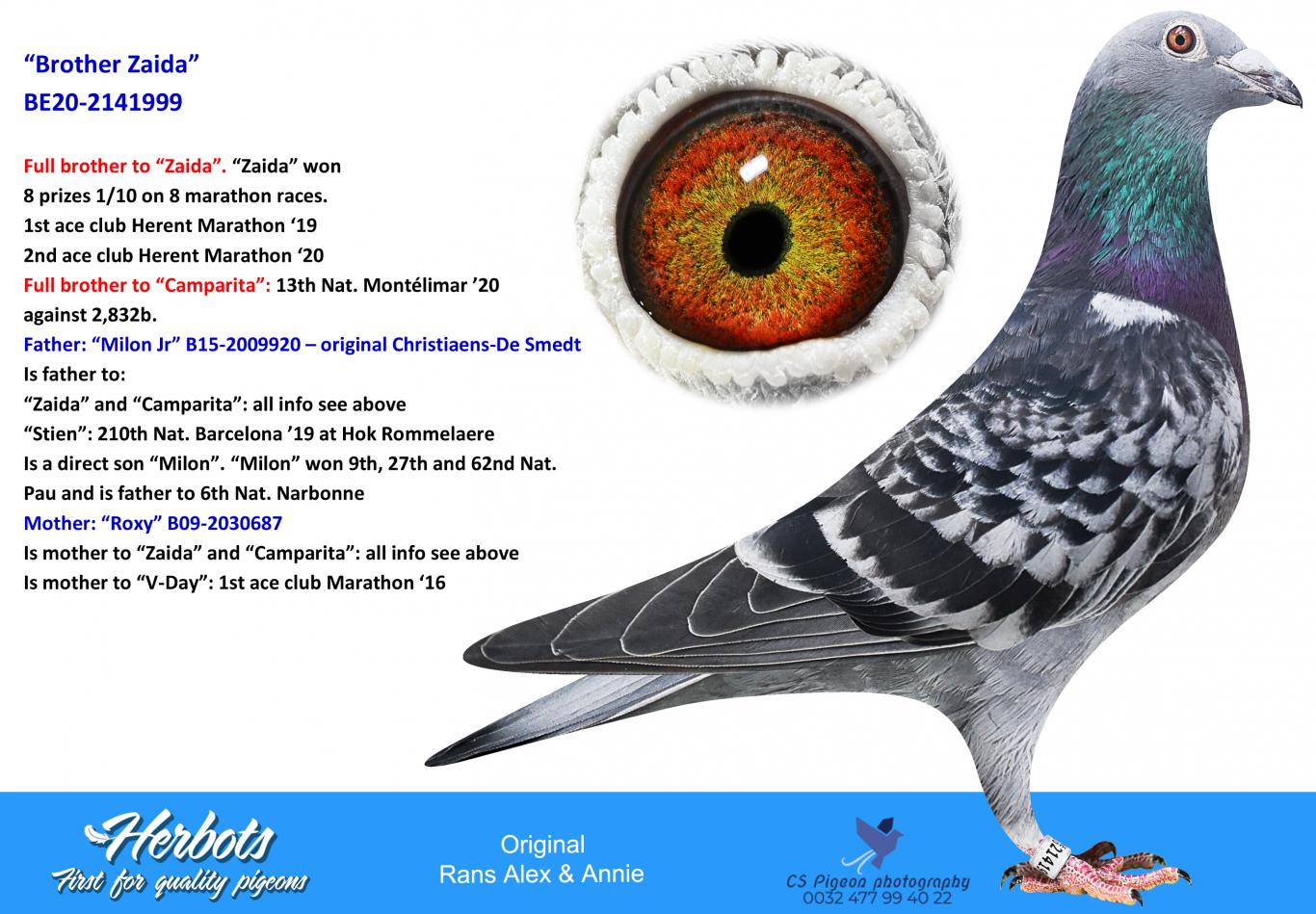 Won prizes on the 7 international races with the old birds 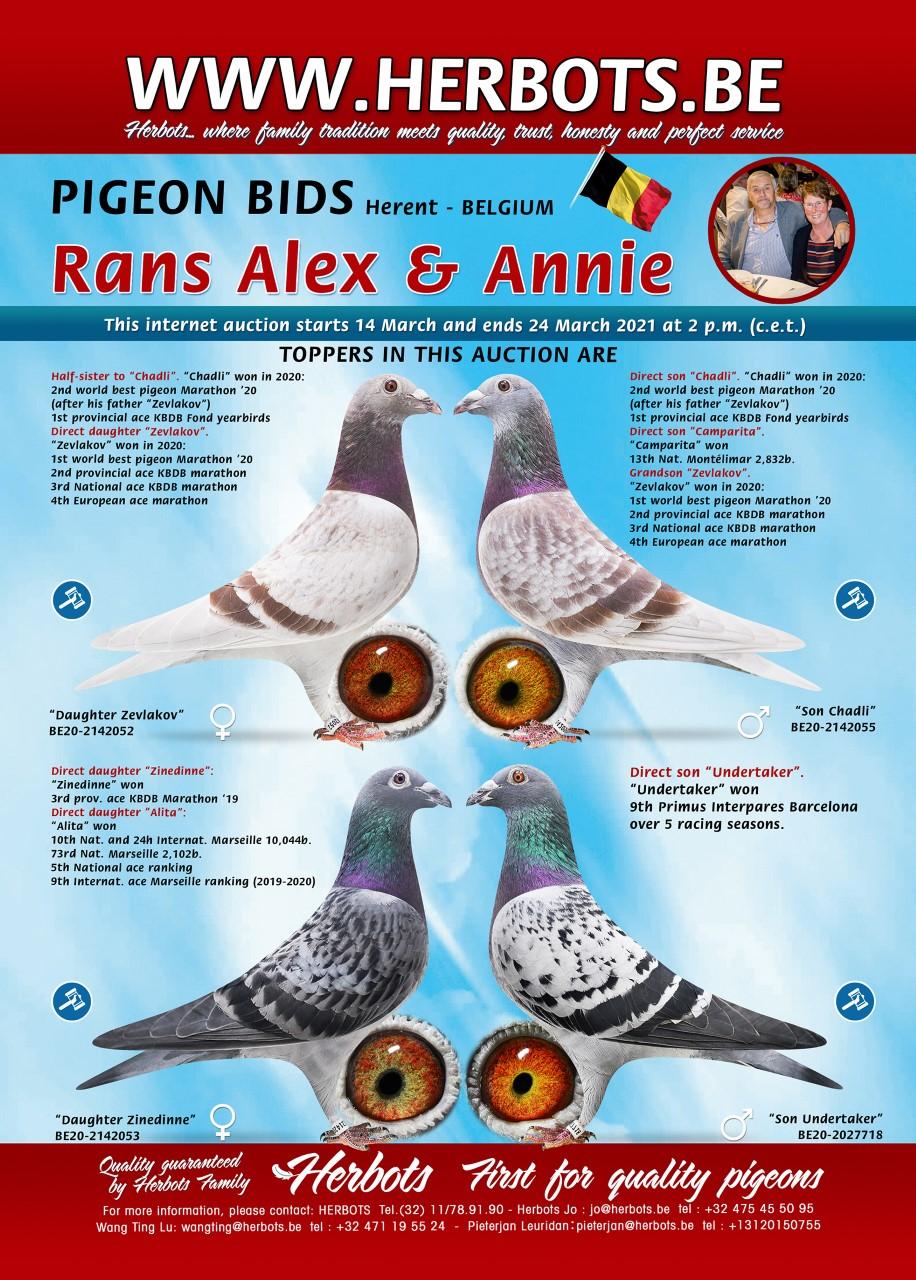